MANILA – A network of media organizations documented 128 cases of threats and attacks against the Philippine media under the Duterte administration.

In a forum on World Press Freedom Day, May 3, the Freedom for Media, Freedom for All Network noted a significant increase on the number of violations to press freedom. From 99 cases documented last Nv. 23, 2018, the number of cases jumped to 128 in just six months.

Twelve journalists have been killed in the line of duty while there were eight cases of slay attempt.

Digital attacks are on the rise with 18 cases of online harassment, 10 cases of website attack and five cases of cyber libel.
Online media outfits are on the front-row of these attacks and threats, leading the number of victims with 50 cases.

Luzon remains to have the highest number of attacks with 89 recorded cases while 13 cases were recorded in the Visayas and 26 in Mindanao. 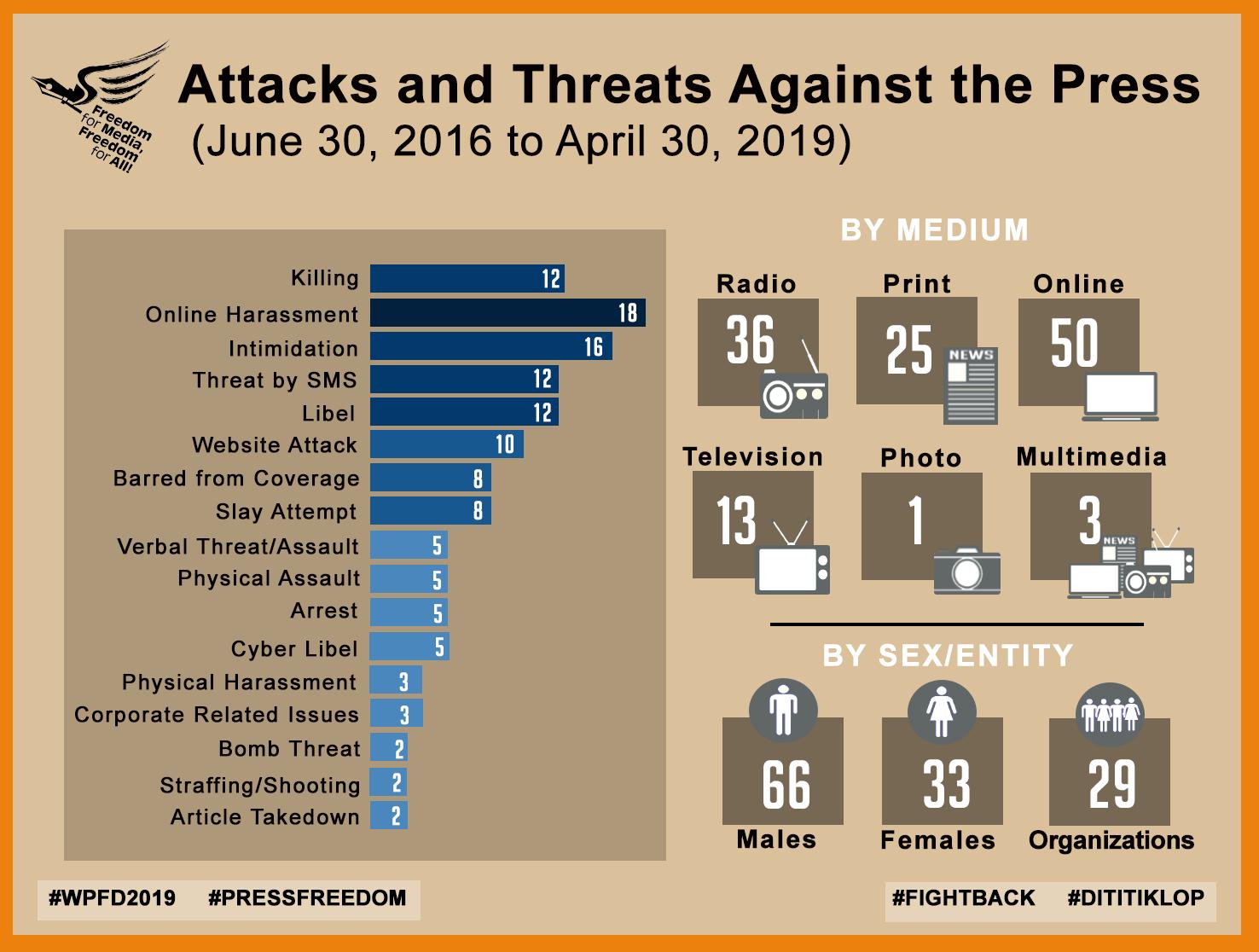 Nearly half of the cases identify state agents as the alleged perpetrators for the attacks. These include local government officials and employees, national government offices and officials, the Philippine National Police and the Armed Forces of the Philippines, the Presidential Security Group, and even a case against one of the officials of the Presidential Task Force on Media Killings, a government body supposedly made to protect the media from any form of harassment and threat.

The network highlighted few cases that they deemed to be causing the biggest spike during the last six months.

Inday Espina-Varona pointed out that the matrix has no basis at all. “We don’t need to defend ourselves because there is not a single piece of evidence against us,” she said.

Maria Ressa, CEO of Rappler, who has been arrested twice and released on bail, said, “Journalism is not a crime.”

Meanwhile, Jaime “Nonoy” Espina, national chairperson of the National Union of Journalists of the Philippines (NUJP), said that red-tagging of individual journalists and media organizations has spiked under the Duterte administration.

The NUJP has been attacked and red-tagged by tabloids as part of a communist front last 2018. The same story also appeared in the state-run Philippine News Agency despite the media group denouncing the claim as soon as it was released.

Espina reiterated that red-tagging is not new, but it is also not good as it poses threats to their members.

He also said that the distributed denial of service (DDoS) attacks on online media, particularly the alternative media that publishes articles critical to the government, are a huge concern on press freedom.

“What it essentially means is that SEC can look to the finances of NGOs. Not only where the funds come from, but also how the funds are used,” he explained.

The SEC memo was released last November, including a set of guidelines for registered Non-Profit Organizations. purportedly to track ‘money laundering and terrorist funding.’

Espina said that the very dangerous thing on SEC memo was the rule that enables SEC to ask the police and military to come in and investigate NGOs, including the foundations of big broadcast networks.

“Without knowing, they don’t even have to inform you, and they could immediately investigate you,” said Espina.

Espina said they are planning on contesting the memorandum legally, labeling the new SEC memo as “unconstitutional and abridging a lot of basic human rights.”

For his part, Luis Teodoro of the Center for Media Freedom and Responsibility (CMFR), zeroed in on the motives behind the attacks. “The reason why government regard the free press as the enemy is because the government fear the free press of its power,” he said.

The report was compiled and completed by different media organizations such as CMFR, NUJP, Philippine Press Institute (PPI), MindaNews, and Philippine Center for Investigative Journalism (PCIJ).