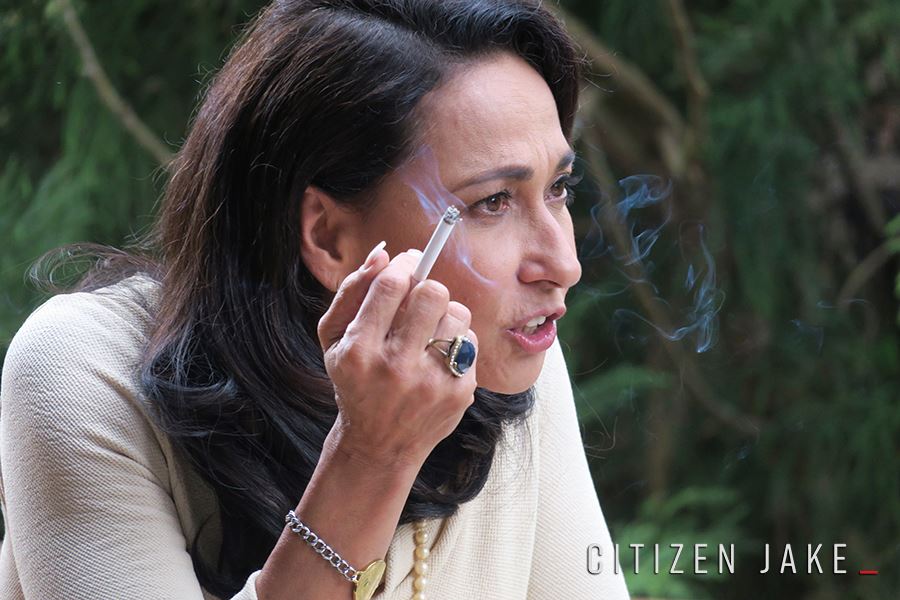 In 1941, a film titled Citizen Kane (dir. Orson Welles) told the story of a reporter trying to uncover the meaning behind the titular character’s dying word. As he embarks on his search for answers, he discovers a complex personality and his rise from obscurity to affluence before dying a rich but lonely man. The reporter eventually gives up his probe, concluding that the mystery behind “Rosebud” will remain as such. But as the film ends, the camera reveals that “Rosebud” is actually the trade name of the sled the young Kane was playing with the day he was taken away from his family by a wealthy banker.

We fast forward to 2018 to see the much anticipated Citizen Jake. While in Citizen Kane we do not see the reporter’s face (we only see his shadow or hear his voice), Citizen Jake brings to the forefront a reporter as the film’s main character.

No other time could have been more appropriate for celebrated filmmaker Mike de Leon to return from his 18-year filmmaking hiatus. Citizen Jake isn’t only an elaborate portrait of a journalist seeking his “Rosebud” amid untruths; it is a scathing depiction of a country mired in corruption, violence, and collective forgetfulness.

At the film’s beginning, we find the titular character Jake Herrera (Atom Araullo) narrating events that happened a few months before the 2016 Philippine Presidential elections. Having resigned from a major daily broadsheet due to conflict of interest for his families’ political activities, Jake teaches at university and maintains his journalism practice through his blog. He mostly writes corruption exposés about the Marcoses and his father – Jacobo Herrera Sr., a former Marcos crony and senator gunning for another term – as a form of avenging the sudden disappearance of his mother which he blames on the older Herrera. Jake’s Personal matters come to a head when he follows the brutal murder of his student. What he and his girlfriend (Max Collins) initially hypothesize as a case of gang rape turns out to be an intricately connected crime involving big names in politics.

The film’s play on noir and metacinema – with its use of behind-the-scenes footage and other elements like title cards, historical documents, and photos – echoes its oft-repeated theme that fact is stranger than fiction. De Leon is known for his unorthodox filmmaking ways, and even casting broadcast journalist Atom Araullo to play Jake Herrera is a clever jab at the real world.

Araullo gives a noteworthy performance as a first-time movie actor among heavyweights Nonie Buencamino (who plays a judge), Cherie Gil (as Patti Medina, a movie starlet-turned-pimp for the rich and powerful), and Teroy Guzman. He breathes fury and indignation into Jake Herrera who is fastened on his mother’s (Dina Bonnevie) inexplicable absence, the trapo ways of the older males in the Herrera family, and in challenging authority despite his privilege as the son of a senator.

Special mention goes to Lou Veloso who plays Lucas, Jake’s colleague in university who fought against the Marcos dictatorship and endured torture and imprisonment. As a film fueled by thrill, Lucas and Jake share a tender moment in a quiet Baguio café where the older man recites a carefully memorized poem about paying one’s dues for a country that has given so much to its conquerors.

Baguio as the film’s main setting is a point of reflection on our colonial past, where the white man relegated his “little brown brother” to a slave. Jake thinks that the “city of pines”, once an idyllic go-to place for American administrators who couldn’t stand the Manila heat, is just like any other Philippine city congested with traffic and pollution. But as in the past, present-day Baguio finds in itself a setting where the Filipino is still predisposed to a colonial mindset, and where master and slave are both Filipinos. The master and the slave, the rich and the poor cannot be friends, as what Jake made clear to his kababata and Wright Park pony boy Jonie (Adrian Alandy) after finding out about the latter’s betrayal.

As the seemingly detached plotlines in the film come together to form a web of lies and deception with Jake at the center, he commits what he considers the “ultimate crime”. Whether or not his final act has caused his would-be downfall is, as Jake says, for the moviegoers to judge. But at this point, he has fully realized where his rightful place is in a world divided by conqueror and conquered, master and slave, powerful and powerless, enemies and friends.

In the film, where disinformation comes from those seated in government; where elections are, as Jake put it, “a festival of assholes” meant to replace a dishonest president with another one; where savagery and deceit are the norm in the country’s socio-political affairs; where the once-banished family of a dictator and thief are slowly creeping back into power; where an ordinary citizen is thus compelled to act beyond his personal matters, Citizen Jake poses this question: if fact is indeed stranger than fiction, then is fiction more believable than fact?

Citizen Kane’s Rosebud is Citizen Jake’s crusade of remembering the past and seeking the truth, now more than ever. At the University of the Philippines Cine Adarna Tuesday night, moviegoers trained their eyes on the screen to see this film that took years in the making. But Jake Herrera was staring right back at us, citizens, and with his usual grit, asking us to speak truth to power.