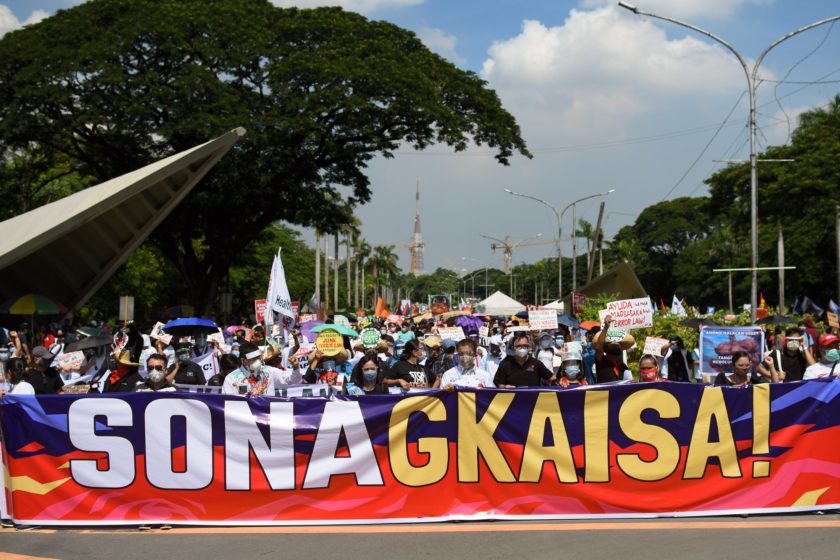 MANILA – Despite warnings from government not to join protests, at least 8,000 went out of their homes and gathered at University Avenue in UP Diliman a few hours before President Rodrigo Duterte delivers his fifth State of the Nation Address.

Dubbed as #SONAgkaisa, groups from different political affiliations showed their unity against the administration’s failed COVID-19 response, against the newly enacted Anti-Terrorism Act of 2020 and against attacks on press freedom and free expression.

Amid the COVID-19 pandemic, the protesters implemented minimum health protocols such as wearing of masks and observance of physical distancing.

On July 23, the Department of Interior and Local Government (DILG) issued an advisory ordering local government units (LGUs) not to issue rally permits “in accordance with health protocols because of the COVID-19 pandemic.” The agency cited the InterAgency Task Force on the Management of Emerging Infectious Diseases resolution prohibiting “mass gatherings.”

The prohibition on protests, Colmenares said, is not because of COVID-19 but because of the administration’s intolerance toward dissent.

Colmenares said that since Duterte assumed office, he has been relentless in attacking his critics, which include members of the political opposition, Church leaders, activists and even members of the media. The newly enacted Anti-Terrorism Act, he said, would be used to intimidate and harass further those who dare speak out their legitimate grievances.

The SONAgkaisa protest also highlighted the administration’s failure to curb the spread of COVID-19 virus.

In the frontline of the protest this morning were health workers from public and private hospitals.

Maristela Abenojar, president of the Filipino Nurses United, lamented that the government has not prioritized the health sector amid the pandemic. With over 80,000 COVID-19 cases so far, Abenojar said the public health care system is overwhelmed. She said that more than 3,800 health workers have been afflicted by the virus due to lack of protective equipment.

Nurses, she said, work for 12 hours per day and most of them are neither regularly tested for COVID-19 nor allowed to go on quarantine.

“If the government does not care for the caregivers, how are we able to care for the sick?” Abenojar told Bulatlat in an interview.

Theater artist Mae Paner delivered a satirical performance, which also pointed out the government’s inefficiency in fighting the virus. Dressed in swimwear and with inflated dolphin balloons, Paner mimicked President Spokesperson Harry Roque’s speech claiming that the country is winning against COVID.

Those who have been economically displaced also went out on the streets.

“We are outraged because the government ignores the plight of the workers and the people in this pandemic. It is more interested in suppressing freedom of speech, freedom of the press and freedom of assembly.  It is more concerned with concentrating power through the Anti-Terror Law, and if Duterte wishes so, a charter change,” Kilusang Mayo Uno Chairperson Elmer Labog said.

According to Center for People Empowerment in Governance, 90 percent of the Philippine labor force has been affected by the lockdown in April. Economist Joseph Anthony Lim said that 50 percent had no work and 40 percent of the labor force went from full-time to part-time workers.

The modernization program has left 150,000 drivers, in Metro Manila hungry or almost five months. According to Piston, only less than 10 percent of drivers in the metro have gone back to the roads.

KMU added that amid the worst unemployment crisis in history, Duterte has no blueprint for pro-people economic recovery and job creation.

Meanwhile, Danilo Ramos of Kilusang Magbubukid ng Pilipinas likened Duterte to “a pest.” Ramos said that farmers and the rural poor did not receive sufficient aid in the time of pandemic and those who fight for their land are either killed, or arrested and jailed.

From March to June 2020 alone, nonprofit organization PANAP monitored 16 land-related killings in the Philippines and 46 cases of land-related arrests, detention and legal persecution. The Philippines is listed as the second deadliest country for land rights defenders, next only to Colombia.

The 8,000-strong protesters agreed in chorus.