‘ABS-CBN signed off, but our fight for press freedom won’t’ 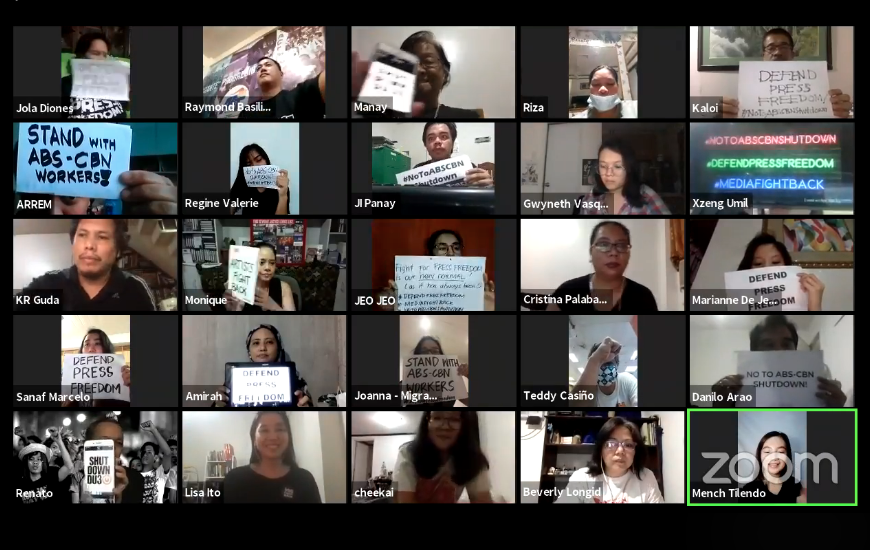 Like the previous Black Friday protests for press freedom that started last year, journalists, artists, and different groups came together to denounce the National Telecommunications Commission’s (NTC) order to shutdown ABS-CBN on May 5.

During the online protest, film director Joel Lamangan of the group Let’s Organize for Democracy and Integrity (Lodi) said that the attack against ABS-CBN is not an isolated case, and reminded netizens that Pres. Duterte has been intimidating media outfits like Rappler and Inquirer since the start of his administration. “Huwag tayong manahimik dahil pagsang-ayon ito sa pagyurak sa ating karapatan sa pagpapahayag,” Lamangan said.

Theater artist Monique Wilson said that although the current lockdown is a “fascist’s dream”, government cannot demolish the “strength of people’s solidarity”. “The fight for ABS-CBN is a fight for press freedom and a fight to keep alive the expression of truth,” she said. “We will continue to unite, resist, and rise against tyranny.”

Actor Baron Geisler, in a recorded message, asked for prayers especially for the thousands of ABS-CBN employees affected by the shutdown.

Prof. Danny Arao of the UP College of Mass Communication said that a franchise renewal is supposed to be a ministerial act for Congress, but is now being used for political reasons under the Duterte administration. It continues to bring a chilling effect to all other media outfits, which clearly makes it a press freedom case.

Altermidya national chairperson Prof. Luis V. Teodoro, meanwhile, encouraged all media organizations to set aside their differences and interests, and unite in opposing what he believes is an enormous attack on press freedom and free expression.

He added that all Filipinos that care for democracy and truth should come together and demand Congress to act on the network’s franchise. “What Pres. Duterte did to ABS-CBN, he can also do others,” he said.

Amid the finger-pointing among the NTC, Congress, and Malacanang, the protesters said no one is to blame but Pres. Duterte, who has openly displayed hostility towards the broadcast network. Tonyo Cruz of consumer group TXTPower stressed that Congress, the Solicitor-General, and the NTC all merely acted to grant Pres. Duterte’s wish. “Galawang diktador ang nangyaring shutdown sa ABS-CBN.”

Filmmaker Kiri Dalena also expressed how the network’s closure will go down in history as a betrayal by the Duterte administration. “It is a step towards Duterte’s Marcosian ambitions, but we will make sure we will remember this episode,” she said.

According to Prof. Lisa Ito, secretary-general of CAP, the fight is not only for ABS-CBN but is also in the defense of our democracy and freedom.

The online protests of media and artist groups culminated with a community singing of ‘Bayan Ko’, a known protest song.

Members of the Movement Against Tyranny (MAT) also organized other activities as part of the Black Friday protests. Earlier in the day, students and members of the UP community held a lightning rally in the campus. 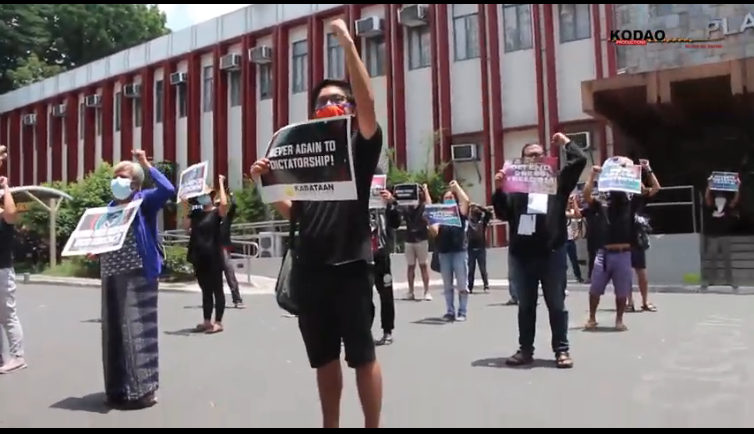 The group also called its members to light a candle at 6:30 pm, the time ABS-CBN’s primetime news program TV Patrol aired. At the same time, the UP Carillon played the melody of ‘Bayan Ko’ and the ABS-CBN station ID to show the university’s solidarity with the protesters.

At 8:00, artists and filmmakers simultaneously streamed the “black screen broadcast” live on various Facebook pages to convey “what the world will look like without freedom of expression, without stories and ideas, and without the checking of truth.”

According to former Department of Social Welfare and Development (DSWD) Secretary Judy Taguiwalo, one of MAT convenors, martial law survivors like her witnessed the first closure of ABS-CBN in 1972, as part of the former dictator Ferdinand Marcos’s moves to control information and make sure he stayed in power.

With a report from Romae Chanice Marquez

The post ‘ABS-CBN signed off, but our fight for press freedom won’t’ appeared first on AlterMidya.