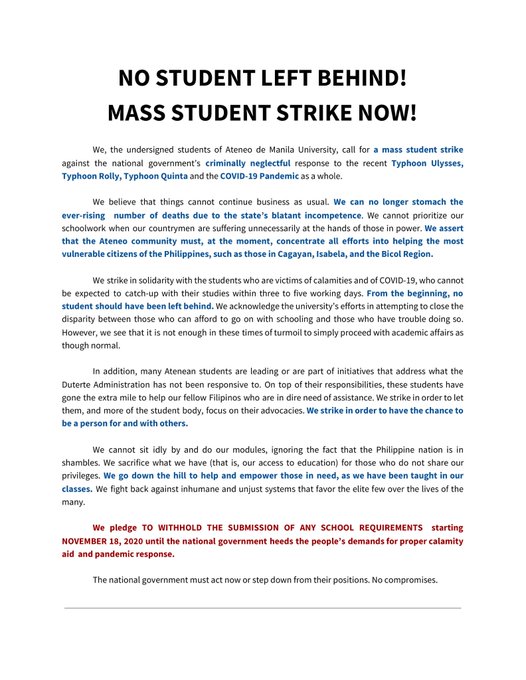 MANILA, Philippines — Amid harrowing scenes of destruction on social media, over 150 students of Ateneo de Manila University vowed Saturday not to submit any academic requirements starting Wednesday, November 18, in protest of the national government’s response to the recent string of typhoons amid the coronavirus pandemic.

Per The GUIDON, the school’s official student publication, students co-signed a statement in solidarity with other victims directly affected by the spate of destructive weather and called on the university community to focus its efforts on initiatives helping the most vulnerable in the aftermath of Ulysses.

In response to the news, students of other universities called on other institutions to do the same.

“We believe that things cannot continue business as usual. We can no longer stomach the ever-rising number of deaths due to the state’s blatant incompetence. We cannot prioritize our schoolwork when our countrymen are suffering unnecessarily at the hands of those in power,” the petition read.

“We assert that the Ateneo community must, at the moment, concentrate all efforts into helping the most vulnerable citizens of the Philippines, such as those in Cagayan, Isabela, and the Bicol Region,” it also said, pledging to withhold the submission of any school requirements “until the national government heeds the people’s demands for proper calamity aid and pandemic response.”

As of the National Disaster Risk Reduction and Management Council’s latest tally, 33 have died in the aftermath of Ulysses, along with 20 injuries and 22 others who are still missing. The national police’s tally stands at 43.

In the wake of the typhoons, a number of universities, including Ateneo, declared suspensions of work and classes, including requirements for online learning.

For those in Cagayan, Isabela and the Bicol Region, the worst has not yet passed. Cagayan province, among the areas hardest-hit by Ulysses, has since declared a state of calamity with thousands still seeking shelter and assistance.

Ateneo students in the petition pointed out that many students were part of “initiatives that address what the Duterte administration has not been responsive to.”

“We strike in solidarity with the students who are victims of calamities and of COVID-19, who cannot be expected to catch-up with their studies within three to five working days. From the beginning, no student should have been left behind,” they said.

“We acknowledge the university’s efforts in attempting to close the disparity between those who can afford to go on with schooling and those who have trouble doing so. However, we see that it is not enough in these times of turmoil to simply proceed with academic affairs as though normal.”

All this also comes against the backdrop of the still-worsening coronavirus pandemic, which has caused over 404,000 infections in the Philippines.

It has been 242 days since the initial enhanced community quarantine was hoisted over Metro Manila, and the Philippines is still under the world’s longest quarantine. Over eight months since the community quarantines have been imposed, the national government is still struggling with curbing the spread of the pandemic, recording thousands of cases per day.

“We cannot sit idly by and do our modules, ignoring the fact that the Philippine nation is in shambles. We sacrifice what we have (that is, our access to education) for those who do not share our privileges,” the students’ petition read.

“We go down the hill to help and empower those in need, as we have been taught in our classes. We fight back against inhumane and unjust systems that favor the elite few over the lives of the many,” it also said.

“The national government must act now or step down from their positions. No compromises.”