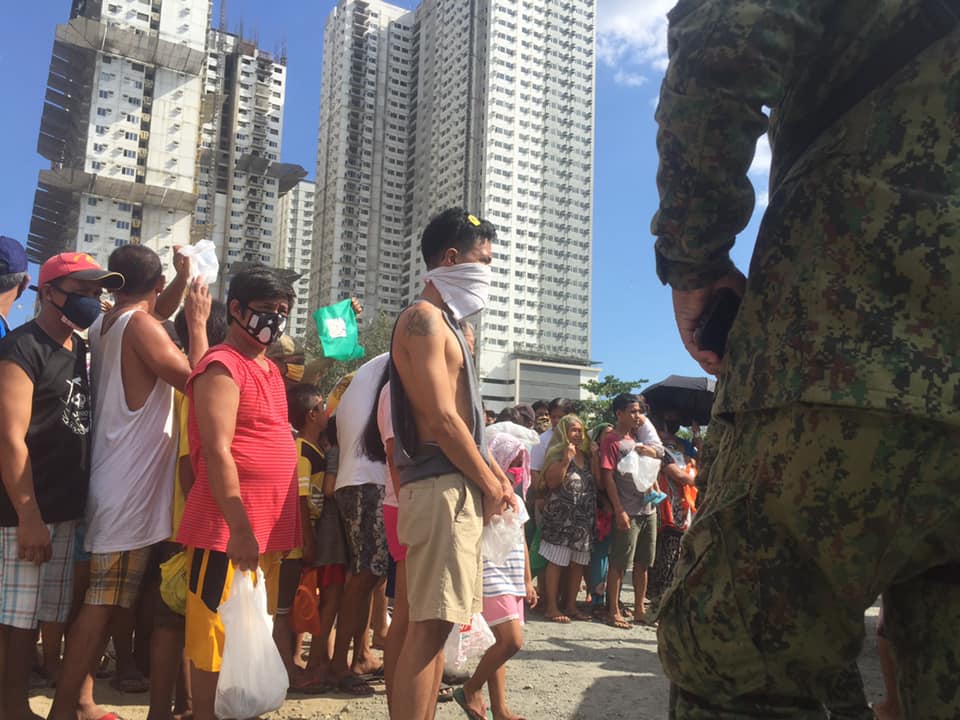 “We have now heard straight from the horse’s mouth that the President intends to exploit the pandemic as a pretext to implement his scheme of imposing nationwide martial and ruling as a dictator.”

During his address to the nation earlier today, April 24, Duterte said he may declare martial law if communist guerrillas’ attacks continue.

Renato Reyes Jr., secretary general of Bagong Alyansang Makabayan (Bayan, said that more than threats, the Duterte administration should address the slow-paced social amelioration for the poor, high COVID-19 infection rate among health workers, lack of livelihood for the people and abuses in the militarized enforcement of enhanced community quarantine (ECQ).

“With only 4.7 million out of 18 million targets receiving social amelioration, the public is increasingly burdened by the ECQ extension,” Reyes said.

Kilusang Magbubukid ng Pilipinas (KMP) also said that only 3.6 percent of the country’s 9.7 million farmers, farm workers and fisherfolk families have received aid in almost two months of the ECQ.

KMP Chairperson Danilo Ramos, said, “The agriculture sector is among the worst hit of the economic crisis, registering over a million of job losses each year. The situation in rural areas are just as worst as in the cities – poverty, hunger, and repression prevails in the countryside and provinces.”

Ramos said Duterte is like a broken record in his threats of declaring martial law. “We did not hear any answers to more pressing issues at hand,” Ramos said.

Meanwhile, the Makabayan bloc said that Duterte should not use the pandemic as an excuse to declare martial law.

“We have now heard straight from the horse’s mouth that the President intends to exploit the pandemic as a pretext to implement his scheme of imposing nationwide martial and ruling as a dictator,” Makabayan said in a statement.

They added that Duterte has been using “unverified reports of alleged NPA attacks to divert attention from his administration’s poor handling of the pandemic.”

In the face of the pandemic, the Makabayan bloc said that the Armed Forces of the Philippines has continued to commit human rights abuses suuch as the alleged bombing of Lumad communities in barangay Mandahikan, Cabangsalan, Bukidnon on March 27, which traumatized children and the residents.

On March 29, the AFP fired at least 10 rockets in the same barangay at around noontime, Makabayan added. “Rounds were also reportedly fired from artillery cannons installed at an adjacent barangay in Loreto, Davao del Norte province.”

In a separate statement, the Communist Party of the Philippines (CPP) said, “Duterte is blaming the NPA to cover-up his governments’ failures. This is a classic deflection tactic to draw away the people’s attention from the government’s inept, incompassionate and irresponsible actions in the face of the pandemic.”

“Duterte is using the COVID-19 crisis, one that has blown up because of his government’s military-minded response and failure to conduct mass testing, to carry out agenda of imposing martial law. Duterte’s ultimate aim is to establish his dictatorship, something he has long sought to do,” the CPP added.

“Its implications are evidently clear: Duterte is singling out human rights organization like Karapatan to deflect accountability from the abuses of authority borne from his militarist and violent pronouncements as well his neglect of the people’s welfare in general, and to herald a witchhunt of human rights workers in the country,” Palabay said.

“Truly, as United Nations Secretary António Guterres had warned, the pandemic is ‘fast becoming a human rights crisis’ as it provides, in countries like the Philippines, ‘a pretext to adopt repressive measures for purposes unrelated to the pandemic,” she added.

Palabay said they strongly called on the government to end all attacks on human rights.

“We remind Duterte that people’s rights are paramount even in situations such as civil war and public health emergencies,” Palabay added.

“Militarist and punitive measures have already proven to be ineffective and outright useless to curb the pandemic: a delusion of martial law will only worsen it,” she said.

The ECQ is extended until May 15 but only to particular regions including the National Capital Region. Some regions are now placed under the general community quarantine (GCQ) where limited operation of public transportation will be allowed.