After Duterte names solons with supposed links to corruption 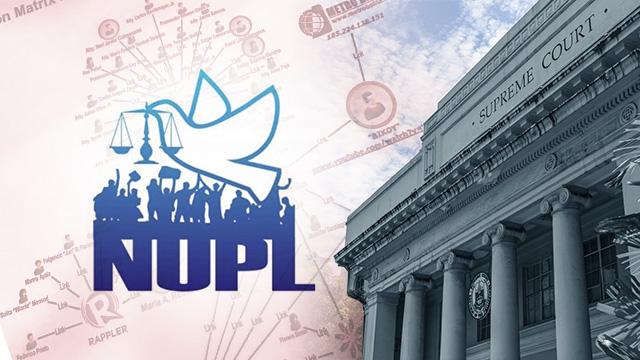 NUPL: Duterte ‘wrong’ to publicize accused of crimes without due process

MANILA, Philippines — The publication of any list of persons being accused of having links to crime  — whether for corruption, for alleged involvement in the drug trade, or for supposed involvement with communist rebels — is wrong if due process was not observed, according to the National Union of People’s Lawyers (NUPL).

In a statement released a day after President Rodrigo Duterte mentioned lawmakers from the House of Representatives accused of involvement in corrupt activities, NUPL President Edre Olalia said it is unfair to place anyone on an incriminatory list without it being verified by the courts.

Duterte name-dropped seven incumbent lawmakers and one former congressman, most of whom were part of the House majority bloc.  However, Duterte clarified that his announcements should not be taken as damning evidence or a sign that they are already guilty — softening his stance on naming alleged corrupt officials.

“It is not prudent, let alone fair, for anybody to publicly and perfunctorily link anyone to an incriminatory list — whether it be in the form of a narco list, red-tagging or about corruption — without due process,” Olalia said.

“The damage and danger to one’s reputation, occupation, profession or livelihood, and worse, even one’s life, liberty, and security, are irreparable and unquantifiable,” he added.

Duterte said during his public address on Monday that the names landed on the list and he had no part in crafting it, repeatedly saying that these were complaints made by people.

The incumbent House members are the following:

Meanwhile, former Ifugao Rep. Teodoro Baguilat — a member of the opposition Liberal Party (LP) — was also mentioned by Duterte. Sato appears to be an LP member, although she is with the majority.

This was not the first time Duterte had tagged individuals who are allegedly on a list — or a matrix in some instances — of people trying to destabilize the government, those involved with the Communist Party of the Philippines, or those with alleged links to the drug trade.

In 2019, before the midterm elections, he read names of officials allegedly involved in the drug trade, to dissuade voters from electing them again.

READ: Narcolist with name of slain Los Baños mayor ‘not mine’ – Duterte

Just recently, Duterte used the late-night briefings on the COVID-19 response to name suspended and dismissed officials of the Bureau of Immigration (BI) and Philippine Health Insurance Corporation (PhilHealth), out of his frustration with corruption issues.

PhilHealth is facing a myriad of corruption allegations from overspending to widespread corruption to the advancement of COVID-19 funds, while BI is reeling from the pastillas scheme where payoffs are given to Immigration officials in exchange for a smooth entry into the Philippines.#