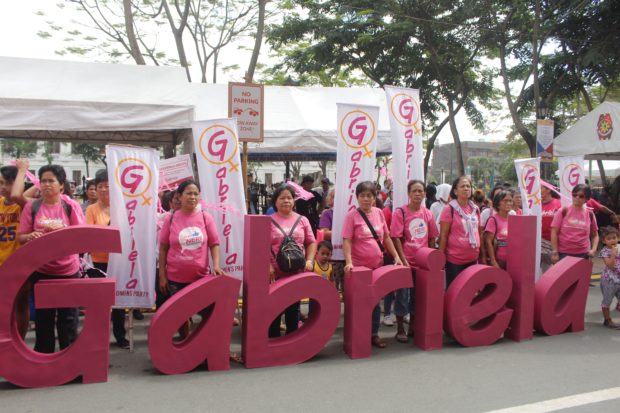 MANILA, Philippines — The sister of actress and philanthropist Angel Locsin has come out to rebuke military official Lt. Gen. Antonio Parlade Jr.’s claim that she is a member of the New People’s Army (NPA), insisting that she is supportive of women’s rights and not the armed struggle.

In a post on Twitter on Thursday, Ella Colmenares said she was not supposed to defend herself but eventually decided to speak up to clarify things as her life and her family may have been placed in danger with the red-tagging incident.

Parlade, who is the Armed Forces of the Philippines (AFP) Southern Luzon Command chief and also a member of the National Task Force to End Local Communist Armed Insurgency (NTF-ELCAC), mentioned Colmenares’ name in his advice against celebrity Liza Soberano on Wednesday.

Soberano was on the wrong end of red-tagging accusations after she appeared in an online seminar hosted by Gabriela.  In the statement, Parlade said that fellow actress Angel Locsin and her uncle Bayan Muna chairperson Neri Colmenares would not inform Soberano of the truth about “Ella Colmenares.”

“I do not have to defend myself as I have not done anything wrong but I decided to speak up, not just for myself but also for my children, whose lives may have been endangered because of this reckless red-tagging being broadcasted on social media,” Ella Colmenares said in her statement.

“Yes, I believe in the protection of women’s rights and human rights, the same advocacies that Angel and Neri fight for, but so do millions of Filipinos across the country.  That doesn’t mean that I’m a member of the NPA as what is being claimed,” she added.

INQUIRER.net has sought the side of Angel on Wednesday, but she has yet to reply as of this posting.  But in a cryptic story posted by Angel on Instagram, she greeted their younger brother who is celebrating his birthday on Thursday, while noting that her sister — Colmenares — whom Parlade said was at the “underground,” is with them.

Colmenares also cracked a joke — about her feeling beautiful — since she was placed alongside Soberano, Locsin, and Miss Universe 2018 Catriona Gray.

Parlade mentioned Colmenares seemingly to warn Soberano and Gray about the dangers of being attributed with groups like Gabriela.

However, he drew flak after netizens believed that his statement — that Soberano should not be red-tagged because she is “not yet” an NPA member — was a veiled threat.

Parlade’s comments about Soberano, that she needs to be educated about the dangers, was also taken by various lawmakers as a form of mansplaining — or men explaining matters to women in a condescending manner.

Colmenares called on the public to stand up and defend people who may have been targeted for just expressing their opinions that may be viewed as dissenting, to those in the administration.

“Let us stop the cycle of hate and instead, discuss the merits of the issues being raised.  #ActivistsNotTerrorists,” she ended.#