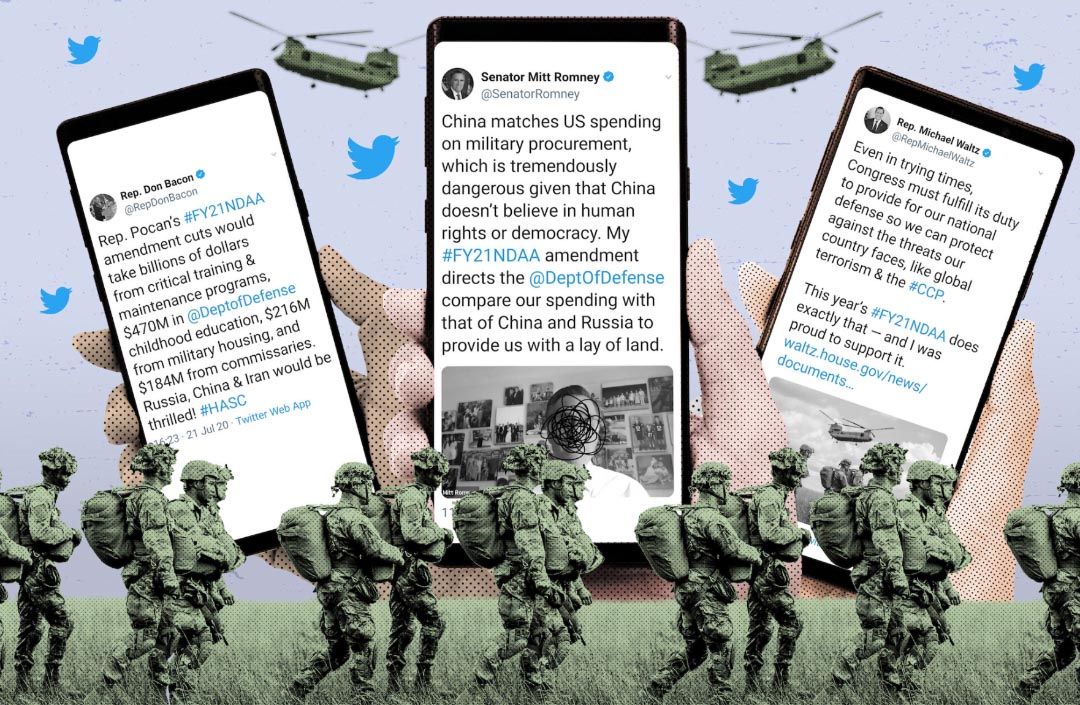 Anti-China hysteria has emerged as the central ‘threat’ designed to justify endless U.S. military spending and adventurism in the Asia-Pacific.

From the Soviet Union to the Viet Cong, geopolitical bogeymen have justified wars, invasions, and occupations the world over. Now, the war machine has pivoted towards China as the cornerstone of its military narrative strategy.

The 2021 Department of Defense spending bill has become contested terrain for a progressive wing of Democrats seeking to curtail endless military spending and a Republican-led bipartisan coalition focused on increasing spending to “stay competitive” with ostensible threats from Russia and China.

On July 21, the House passed its version of the Fiscal Year 2021 National Defense Authorization Act (NDAA), with an increase in stipulated defense spending from 2020’s $738 billion to a $740 billion package for 2021. The Senate followed on July 23.

A proposed amendment, raised by Rep. Mark Pocan (D-WI) and Rep. Pramila Jayapal (D-WA) in the House and Senator Bernie Sanders (I-VT) in the Senate, called for a modest ten percent decrease in military spending to fund social programs. Pocan and Jayapal called for Congress to break from its hawkish orthodoxy of “rubber-stamping a skyrocketing Pentagon budget” while slashing social expenditures. For reference: in 2019, the United States spent more money on its military than the next nine countries combined.

The modest progressive amendment was overwhelmed in both chambers by the force of Sinophobia, anti-China hawkishness, and a New Cold War mentality that has bipartisan power in Washington.

For others, merely rubber-stamping another massive military budget wasn’t enough to prove their anti-China credentials. Rep. Michael Waltz (R-FL) pushed into the bill an amendment that would cut Defense Department funding to universities that house Confucius Institutes or the Chinese Thousand Talent Program—initiatives Waltz claim “have given mainland China’s Communist regime the freedom to take full advantage of our academic openness and steal it.” Not to be outdone, Rep. Ken Buck (R-CO.) called for the Chinese-owned social media app TikTok to be banned from government devices.

Senator Mitt Romney launched similar anti-China attacks on the Sanders amendment in the Senate. While Sanders implored colleagues to “invest in our people here at home” as they struggle with evictions, homelessness, and unemployment exacerbated by the U.S. government’s botched COVID-19 pandemic response, Romney erroneously warned that China matches U.S. spending on military procurement (as of 2019, China’s annual military expenditures totaled $178 billion to the U.S.’s $658 billion). He painted a grim picture of the future under the Communist Party of China’s supposed plan for world domination:

“They intend to put us way in the headlights. Can you imagine the consequences, when a nation that does not believe in human rights, with only one party…when they have the overwhelming military force in the world. That’s where we’re headed.”

The hypocrisy of massive military spending against an imagined China threat while the U.S. roils through its unsolved COVID-19 crisis, refusing spending opportunities to support testing, or emergency stipends, is hard to ignore. A progressive coalition supporting the amendment noted that in 2019, the Center for Disease control budget of $7 billion was less than one percent of the Pentagon budget. Under the cover of the “China threat,” Congress continues to devote bottomless funding to endless war and militarization while neglecting its own people.

The China “containment” program, a recurring archetype in U.S. military strategy in Asia for at least a half-century, once again plays a central role in the fight over 2021’s military spending. A recently released budgetary wish list from the Indo-Pacific Command titled “REGAIN THE ADVANTAGE” seeks to solidify U.S. military hegemony in Asia and the Pacific under the pretenses of an “aggressive” China. The imperialist demand to retain an “asymmetric advantage” against China is in direct opposition to the struggles against U.S. militarism led by the people of Ryukyu (Okinawa), Guam, Hawai‘i (where the U.S. plans to host an international “war games” convening in August), and beyond—all lands on which the plan called for an expansion of missile, radar, and precision-strike networks.

The hypocrisy of massive military spending against an imagined China threat while the U.S. roils through its unsolved COVID-19 crisis is hard to ignore.

Senator Senator Jim Inhofe (R – OK) cited the Indo-Pacific strategy in his justification for the massive military budget, calling the region “our priority, especially as China expands its reach and influence.”

The invented narrative of Chinese aggression and expansionism—in direct contradiction to China’s foreign policy doctrine of multilateral cooperation towards a “shared future for humankind”—has justified the U.S.’s reorientation of U.S. military strategy for the past decade. In 2019, the Department of Defense designated the Pacific its “priority theater.” However, as early as 2012, President Barack Obama and Secretary of State Hillary Clinton had showed their hand, shifting the majority of U.S. military firepower to the Asia-Pacific region and seeking to curtail China’s role in regional trade and security organizations through the so-called “pivot to Asia.” This longer history of military build-up vis a vis China speaks to the fact that the New Cold War strategy has long been a bipartisan effort. In fact, while Republicans led the charge to destroy the House effort, the vote failed in a resounding 93-324 vote, with 139 Democrats joining 185 Republicans in voting no to the ten percent budget cut.

The COVID-19 crisis has demonstrated once again the violent contradictions of neoliberalism: the frailty of the state social welfare is matched only by the ostentatious might of the state’s repressive apparatuses: military, police, and prisons. Cutting a $740 billion check to the military while people across the U.S.—disproportionately Black, indigenous, and immigrant communities—are devastated by the COVID-19 reveals the impossibility of justice and equity at home so long as the priority of the ruling class lies in endless war abroad.

Cutting a $740 billion check to the military while people across the U.S.—disproportionately Black, indigenous, and immigrant communities—are devastated by the COVID-19 reveals the impossibility of justice and equity at home so long as the priority of the ruling class lies in endless war abroad.

The anti-China doctrine has become the cornerstone of the U.S. military agenda, and is likely to define its geopolitical strategy over the next decade. Where China has committed itself to a “peaceful rise” forged in Third World commitments to non-intervention, self-determination, and win-win cooperation first articulated at Bandung in 1955, the U.S. clings to a zero sum vision of inevitable “great power competition.”

The anti-war movement and all so-called progressive movements must understand that resisting the unilateral escalation towards conflict with China is in the interests of domestic fights for a fair wage, affordable housing, health care, and other progressive efforts that could be sponsored many times over through a defunded Pentagon budget. Unfortunately, too many on the left have taken to repeating State Department arguments re: the China ‘threat,’ choosing to “denounce both sides” and uncritically repeat hawkish narratives of supposed Chinese aspirations for hegemony, facts be damned. Those who do so only add fuel to the fire of Sinophobia and perpetual war, and their chauvinism and opportunism ultimately undermines their supposedly progressive commitments.

Since the end of World War II, the United States has justified its de facto military occupation of the world by invoking various enemies. From the Soviet Union to the Viet Cong, the DPRK to the Taliban, various geopolitical foils have proven invaluable as bogeymen to justify several decades of proxy wars, invasions, and occupations the world over. Now, the war machine has pivoted towards China as the cornerstone of its military narrative strategy.

As the narrative crux of its global military occupation, resisting the ‘China threat’ narrative is fundamental to all struggles for peace and an end to U.S. imperialism.