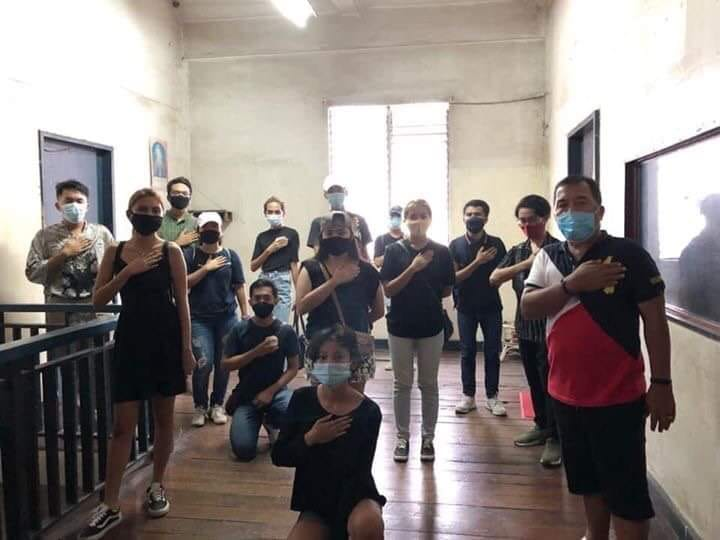 The students were subjected to abuse and intimidation, with one student choked by an officer in plainclothes while he was trying to explain. One student was also labelled as a “recruiter for the New Peoples’ Army.”

SANTA ROSA, Laguna – Progressive groups in Iligan City refuteD claims by Iligan City Police regarding the June 12 arrest of 14 students who were protesting the Anti-Terrorism Bill.

According to the Iligan City Police Office (ICPO), the students were invited to ICPO Station 5 for “violating the health protocols on social distancing.”

KPL-NMR and the Students’ Alliance for the Advancement of Democratic Rights of MSU-IIT (STAND-IIT) disputed this, stating that the police’s statement was “misleading and is clearly meant to save face and make their warrantless arrest appear legitimate.”

“As shown in a video recorded by one of the protesters, the students were not invited, the police officers dragged them by the arm, caught them in a chokehold and when the students asked them on what grounds they were being arrested, the arresting officers couldn’t cite any violations,” read a joint statement by KPL-NMR and STAND-IIT.

One the officers even shouted “Shoot them!” while the students were being dragged.

This, despite the fact that the students were able to produce legal documents for their protest while observing strict physical distancing. The students were also given ten minutes to conduct their program but chose to stage a five-minute protest, intending to clear out immediately after.

The 14 arrested students were then detained without probable cause for roughly seven hours before they were released before 6 p.m. KPL-NMR and STAND-IIT state that the students were subjected to abuse and intimidation, with one student choked by an officer in plainclothes while he was trying to explain. One student was also labelled as a “recruiter for the New Peoples’ Army.”

The officers also confiscated the students’ phones and interrogated seven of them before legal counsel arrived, taking personal information from them. Their legal counsel Kristine Campilan stressed that the police officers were violating Republic Act 7438 by conducting a “custodial investigation without the assistance of counsel.”

KPL-NMR and STAND-IIT contend that the state is “trivializ[ing] the protests as mere violations of the government’s social distancing measures,” instead of “addressing the root issues surrounding them.”

“These draconian measures are but a taste of what the government and its fascist machinery can do should the railroaded Anti-Terrorism Bill be passed. It shows how they can set their very own laws aside if these contradict their interests,” their joint statement read.

Not the only case

Police have also used intimidation tactics against protesters in other parts of the country. In Tuguegarao City, police threatened members of Kabataan Partylist Cagayan Valley with arrests should they continue with their own mañanita.

In Manila, about 40 police officers were immediately deployed in response to a protest staged inside the De La Salle University – Manila campus. There were approximately 20 protesters conducting a short program, including former Deputy Speaker Atty. Erin Tañada.

Even the UP Diliman “grand mañanita” wasn’t safe. Quezon City Police Department officers blocked the entrances along the Commission of Human Rights and the Asian Center, blocking protesters from entering the campus.

These protests were part of a nationwide series of actions calling for the junking of the Anti-Terrorism Bill, which critics have repeatedly slammed as actually targeting activists.