Balik-Tanaw | Pentecost: The Unshakeable Faith of the Canaanite Woman 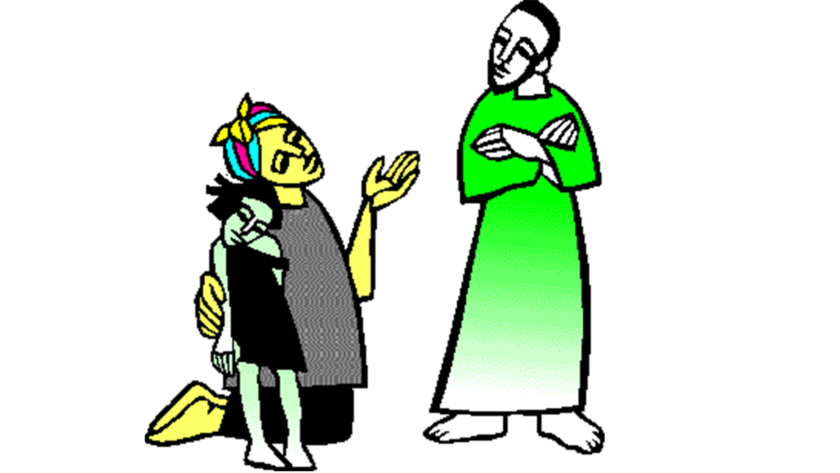 The Unshakeable Faith of the Canaanite Woman

Jesus has entered Tyre and Sidon after his encounter with the Pharisees and the scribes who were consistently rejecting him. On his way, he met the Canaanite woman. In the Book of Deuteronomy, the Canaanites were known for their pagan and corrupt practices. Their presence in the land was perceived as a threat to Israel’s religion and morality. Now, Jesus was getting known in the region because of his remarkable deeds. So, the Canaanite woman would somehow know who Jesus is. The woman came crying out to Jesus. “Lord and Son of David, have mercy on me! My daughter is suffering terribly from demon-possession.” (15:22) Jesus did not say a word but the Canaanite woman kept following and begging for mercy for her daughter’s healing. Jesus did not send her away although the disciples were already annoyed asking Jesus to send her away. As a Canaanite woman, she is considered an unclean outsider and an old enemy of Israel. But her situation did not discourage her from approaching Jesus. Her persistence made Jesus respond twice. First, he explains to her that his mission is first to “the lost sheep of the house of Israel.” (15:24). Jesus wanted the disciples and the woman to understand fully that His ministry in the short time he had on earth was very focused on Israel. On her second cry for help, the woman knelt and begged Jesus to help her. This time, Jesus likens her Gentile status to the small pet dogs who long to be fed from the table (15:26). In a short saying, the Jews are the “children” and the Gentiles are the “dogs” The children get fed first. Nonetheless, the woman’s response was very sharp and straightforward. She accepts the status of a family’s dog where even puppies enjoy crumbs from their owner’s table (15:27). The Canaanite woman was claiming a place in the household even though she is an outsider. The woman knew that the Messiah came to Israel first and all she could do is to ask for mercy as a non-Israelite. The woman explicitly engages Jesus of existing social divide of inclusion and exclusion. While her persevering attitude magnifies her understanding of Jesus’ true identity as the Messiah she did not stop there. Believing in Jesus and in his power to heal her daughter, she got out of her cultural boundaries and claim her rightful position even if she was an outcast. Her ultimate hope of receiving God’s mercy and grace was fully realized.

II. The Unshakeable Faith of the Canaanite Woman

The Jews rejected Jesus, but the Gentiles accepted him. And this time Jesus responded with emotion: “Dear woman, you really do have a lot of faith…” Her faith was rewarded. Her daughter got healed. The Canaanite woman is a clear example of how an ordinary, simple, poor, and outcast woman can be included in the Lord’s table. No restrictions, no rejection, no boundaries of what Jesus can do even to the least of his sisters, that salvation is for everyone. But the religious leaders who were blinded by their arrogance and greed for power, has rejected Jesus and failed to recognize the need for their own salvation. How many of our leaders in our times have rejected, ignored, and even ridiculed God’s offer of salvation, healing, restoration, and reconciliation? Many of our leaders wallow in luxury depriving the poor and those in the margins, the basic needs for food, shelter, jobs, health care, and education.

The reality of the pandemic only exposes the viciousness, the corruption, and indifference of our leaders. Worst, they took advantage of the pandemic to amass more wealth, abuse their authority, show their sheer negligence and apathy to the people’s welfare and well-being, and their utmost disregard for civil liberties and human rights.

Just like the Canaanite woman, women of today do not just accept their unmerited sacrifices and miseries and would not take their dehumanizing situation silently, especially if they are losing their children and their loved ones in a very inhuman way. They are moving forward, breaking boundaries of gender and cultural stereotypes, and seeking peace, justice, the security of food and jobs, safety of our children, and the well-being of others.

The faith of the Canaanite woman gives us hope that God’s work is not yet finished. That we as a church need to take the message of grace to the world, to people who are seeking salvation and mercy. Our prophetic tasks continue. God listens to our prayers and petitions. Our government is subject to God’s authority and therefore, accountable to God and God’s people. The Kairos moment will come when “God will drag strong rulers from their thrones and sends the rich away with nothing” (Luke 1:52:53).

As Jesus said, “Oh, woman, your faith is something else. What you want is what you get.” (Bulatlat.com)

Balik-Tanaw is a group blog of Promotion of Church People’s Response. The Lectionary Gospel reflection is an invitation for meditation, contemplation, and action. As we nurture our faith by committing ourselves to journey with the people, we also wish to nourish the perspective coming from the point of view of hope and struggle of the people. It is our constant longing that even as crisis intensifies, the faithful will continue to strengthen their commitment to love God and our neighbor by being one with the people in their dreams and aspirations. The Title of the Lectionary Reflection would be Balik –Tanaw , isang PAGNINILAY . It is about looking back (balik) or revisiting the narratives and stories from the Biblical text and seeing ,reading, and reflecting on these with the current context (tanaw).

The post Balik-Tanaw | Pentecost: The Unshakeable Faith of the Canaanite Woman appeared first on Bulatlat.