Contrary to how the Pepmaco brands itself as leading surfactant manufacturing with innovative and advance technology, respiratory masks barely protect the workers.

This line of Susan Roces in the TV ad of the laundry soap Champion appealed to most household. Its simple but straightforward message sounded like the brand was dedicated on taking care of the consumer’s clothes and hands. But it turned out, the company isn’t completely honest with the consumers.

Workers of Pepmaco, manufacturer of Champion, Hana shampoo and Calla fabric conditioner, in Calumbang, Laguna staged strike last June 24 to protest their unsanitary and dangerous working conditions and demand regularization and increase in wages. On the fifth day of their picketline, unknown men violently dispersed them.

The workers then built makeshift tents about 50 meters from the gate of the factory where they initially staged their picketline.

Two weeks since their strike, no one has backed down and lost faith in their struggle. Workers are determined to hold the company liable and get compensation for their years of “inhumane hard work.”

Brenda Ebero, worker and member of Pepmaco Worker’s Union, an affiliate of Kilusang Mayo Uno, recalled how she has been exposed to harmful chemicals 12 hours a day.

Her job is to handle surfactants such as sodium lauryl sulfate, coco fatty sulfate, and sodium fatty alcohol sulfate. These chemicals are known to be irritants.

And even though it is clearly stated in the laundry powder’s packaging that it’s “hazardous,” the company provided limited safety gears to protect themselves while making the product.

“Even with minimal exposure to dust, or we just sweat a little, the surfactants easily irritate our skin and then the redness eventually turns into wounds. With daily contact, our skin gets burnt. All of us in the building experienced these,” Ebero confessed.

Ebero revealed they were provided with only two respiratory masks. “In our building, we were about 50 workers there so we needed to share the two masks each shift.”

Contrary to how the Pepmaco brands itself as leading surfactant manufacturing with innovative and advance technology, respiratory masks barely protect the workers. 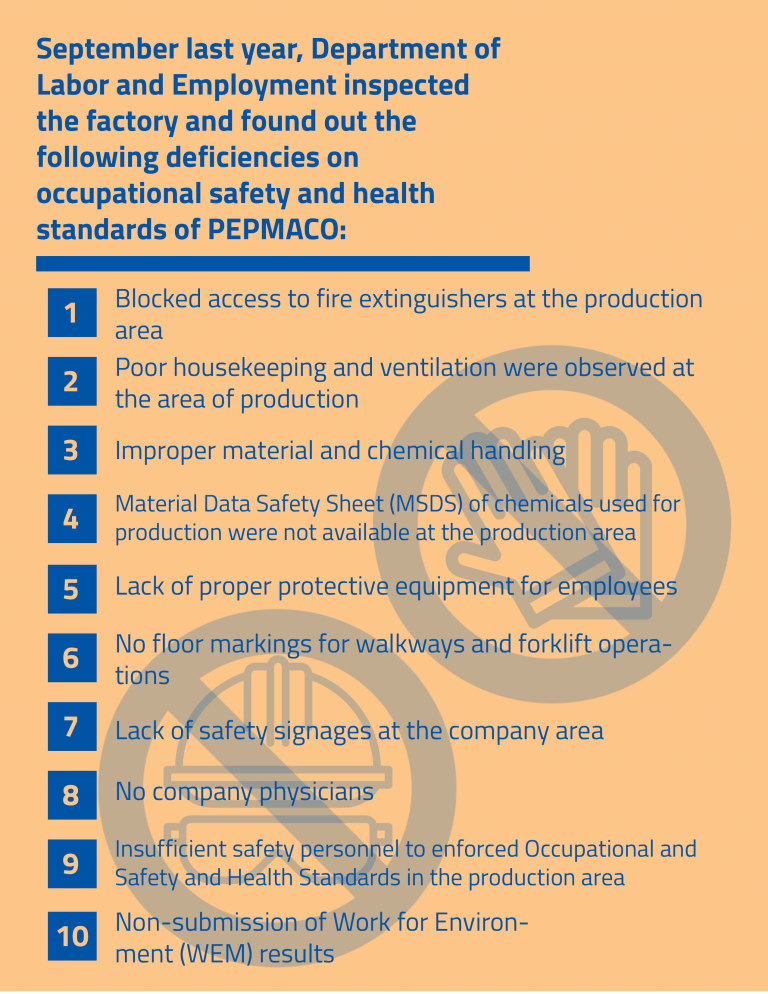 Given that the workers are exposed to harmful chemicals and heavy machineries, Pepmaco sholuld have at least stationed medical personnel and supplies.

There were times that when accidents happened, only human resources officers attend to the workers, the union said. Workers were given any medicines available.

“Sometimes, if we go to them, they would just give us whatever medicine they have. If I complain of fever, they give us Alaxan. It’s very clear to us that they don’t care at all,” Ebero said.

Jenmar Rubino, a Pepmaco worker for seven years, lamented that the company has disowned them for demanding better working conditions.

“It isn’t just about us. What we want will benefit the company too. If we are in good shape, then we can do our jobs better,” said Rubino.

“If we complain about how we couldn’t keep up with the job, they would just put us into a much harder task,” Rubino added.

When Rubino complained to his agency about how he got stuck for one month as a weigher in the factory, his supervisor put him in a much heavier job as a palletizer, or one who stacks boxes.

Now that they are on strike, Pepmaco has posted in their website claiming that the members of the union had never been their employees.

Halfway through the Presidency of President Rodrigo Duterte and the story of contractualization of the Pepmaco workers and others still continues. His bold and firm promise in ending ENDO (contractualization) during his campaign for presidency remains as one of his many unmet promise.

The post Behind the fragrance of laundry soaps appeared first on Bulatlat.