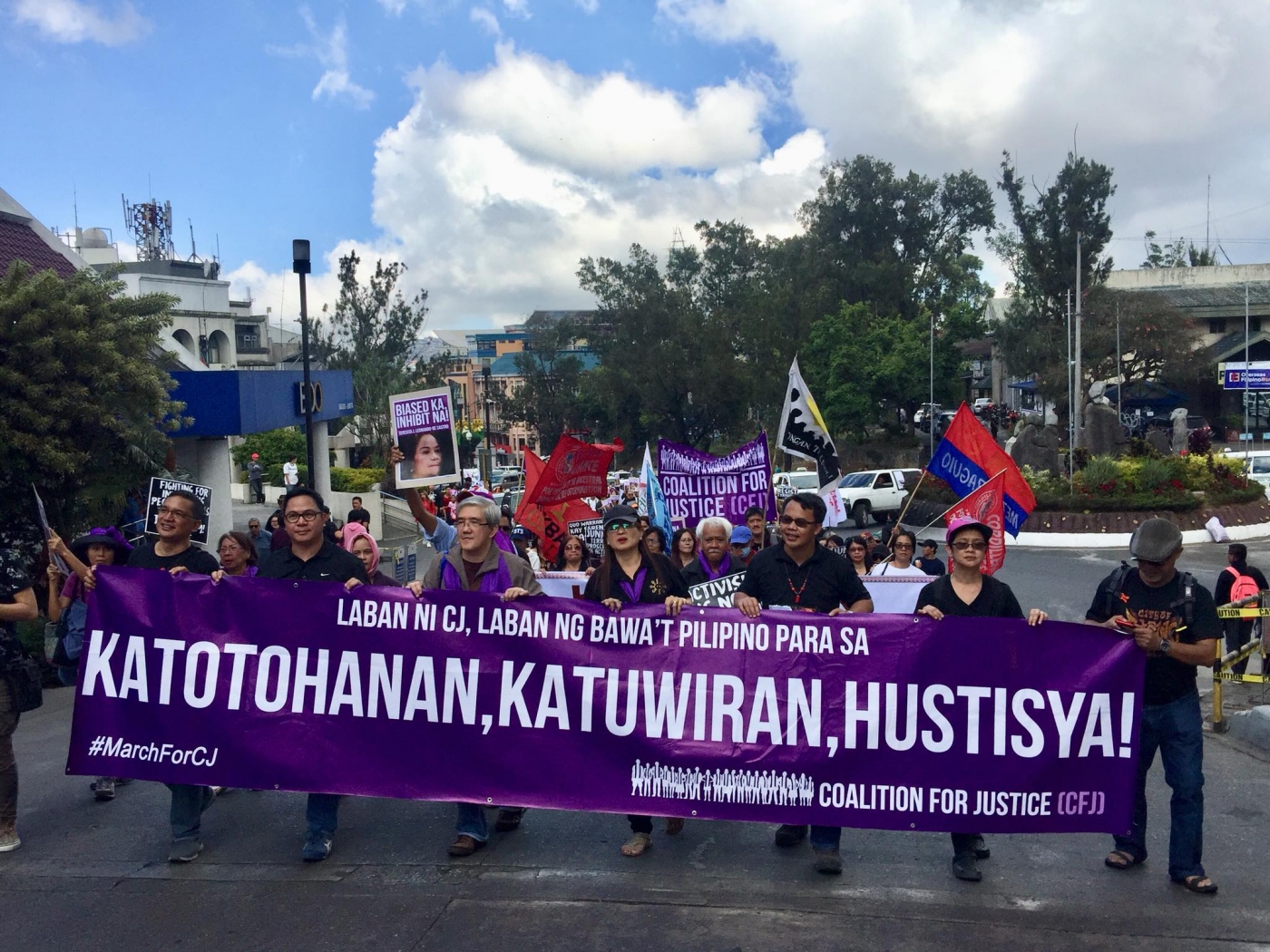 BAGUIO CITY – “For the sake of plain delicadeza, sense of fairness and greater interest of justice,” various groups led by the Movement Against Tyranny (MAT), the Coalition for Justice and Cordillera People’s Alliance (CPA) today urged five justices of the Supreme Court (SC) who they said shown bias against Chief Justice Ma. Lourdes Sereno to inhibit themselves from the quo warranto case against her.

The statement has been made as hundreds of pro-democracy activists marched to the SC office in Baguio City today to stage a protest rally in time for the oral arguments and en banc session of the SC justices to hear the petition against the quo warranto filed by lawyer, Atty. Lorenzo Gadon against Sereno.

The groups were blocked from proceeding with their march few meters away from the SC gate by elements of the Philippine National Police. Tension also heated up as Gadon showed up near the ranks of the protesters, raised his middle finger against the rallyists and yelled them, “Mga bobo!” (Fools!)

Protesters said the resentment and the personal and professional enmity that SC Justices De Castro, Tijam, Jardelezza, Peralta and Bersamin have against Sereno was evident the House Committee on Justice deliberations on Sereno’s impeachment.

“The public can never be convinced of their objectivity and fairness in judging the quo warranto case,” said Teddy Casiño, convenor of MAT.

He added, “More than this, the duty of the SC to adhere the constitutional provisions on impeachment and the system if checks and balances in government leaves them no choice but to dismiss the case altogether.”

MAT also challenged the SC not to allow itself to be used as an instrument for Duterte’s tyrannical plot to gain absolute control of the Judiciary.

They also see the quo warranto case as “a tool to circumvent the Constitution that will undermine the system of checks and balances by making impeachable officials like Sereno vulnerable to harassment and intimidation from irrational and demagogues like Duterte.”

“The Court’s integrity and independence already suffered a huge setback during the mockery committed by the five justices at the House Justice Committee hearings. The Court will seal its own destruction if they allow the five to participate and the quo warranto petition to prosper and lead to Sereno’s unconstitutional ouster,” Casiño stressed out.

MAT noted that in the final analysis, it is not Sereno that is on trial rather the SC itself. They said that the people as the judges on whether the justices live up to their duty of upholding the Constitution and the law or be reduced to Duterte’s minions.

Duterte’s hands on impeachment vs. Sereno

Casiño also lambasted President Duterte’s “livid” response to Sereno’s acceptance speech in “Parangal Ng Kagitingan” awards on Monday, saying that it displays how Duterte has swept away the checks and balances so necessary for democracies to function.

An irate Duterte said he would personally ensure Sereno’s ouster from the Supreme Court: “I will egg (Solicitor General) Calida to do his best. Ako na mismo maglakad, magkalaban sa ‘yo.”

Directly addressing Sereno, Duterte said: “Sige ka diyan, daldal nang daldal, sige, upakan kita. I will help any investigator, talagang upakan kita. I am putting you on notice na I am now your enemy and you have to be out of the Supreme Court.”

Casiño said, “In declaring himself an enemy of the Chief Justice and guaranteeing her ouster from the Supreme Court, the President also declared war on a Constitution that clearly stipulates the co-equal status of the executive, legislative and judicial branches of government.”

He added, “Likewise, his brusque order for the House of Representatives to fast track an impeachment process his solicitor general has tried to derail gives lie to his efforts to wash his hands off this persecution of Sereno.”

The groups further challenged SC justices to pull back from the brink and show Duterte that there are lines that he will not cross.

“But we are sure of one thing. Even if our so-called democratic institutions crumble from the rot of corruption and the iron-hand of tyrannical rule, the Filipino people will resist, we will not give up the fight,” ended Casiño.