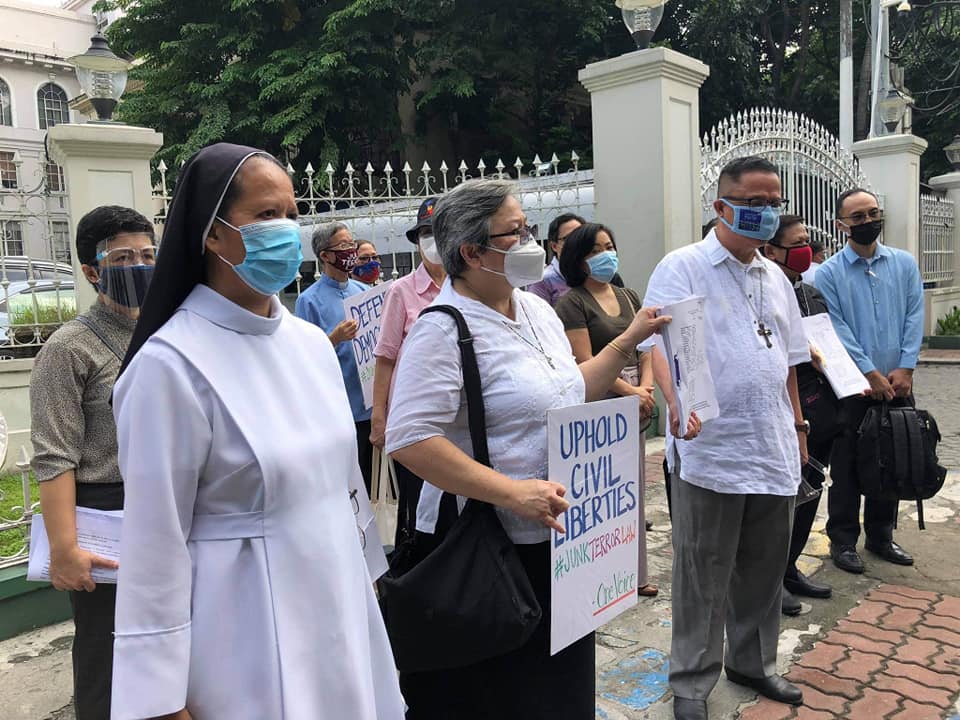 MANILA – Church leaders joined the mounting legal opposition against the controversial Anti-Terror Act of 2020 as they filed their own petition today, July 24, before the Supreme Court. They said that under the new law, their ministries for the poor and the downtrodden may be misconstrued as an act of terror.

Petitioners include Bishop Broderick Pabillo of Archdiocese of Manila, Bishop Gerardo Aliminaza D.D. of the Diocese of San Carlos, Protestant leaders Bishop Rex Reyes Jr. of the Episcopal Church in the Philippines, UCCP Bishop Emergencio Padillo, NCCP general secretary Bishop Reuel Marigza, nuns of the Rural Missionaries of the Philippines, priests, evangelical professors, and church lay people. Also one of the petitioners is former convenor of the Philippine Ecumenical Peace Platform Rey Casambre, who has been detained since 2018 due to trumped up charges.

“Our ministries—with marginalized sectors, the economically poor, and those who struggle at picket lines, with boycotts, and though others forms of legitimate and democratic challenge to oppression and exploitation—can be misconstrued as terrorism, supporting terrorism, or inciting terrorism under the Anti-Terrorism Law,” Alminaza, one of the convenors of the Church people Workers Solidarity, said.

In their petition, church leaders assailed that the vagueness of the Republic Act No. 11479 or the Anti-Terror Act of 2020 will expose them to “credible threat of prosecution” for their ministries and advocacies.

Even before this law, petitioners like the Rural Missionaries of the Philippines have long been in the crosshairs of government. Their bank accounts remain frozen and its former head Sr. Elen Belardo is facing trumped-up charges filed by Presidential Security Adviser Hermogenes Esperon Jr.

The NCCP, too, was red-tagged during a congressional hearing in 2019, along with local and international humanitarian agencies.

Earlier this week, the Catholic Bishops Conference of the Philippines issued a pastoral letter, expressing their disbelief about “the manner in which the contentious Anti-Terror Bill was fast-tracked” amid a pandemic.

“The dissenting voices were strong but they remained unheeded. None of the serious concerns that they expressed about this legislative measure seemed to be of any consequence to them. Alas, the political pressure from above seemed to weigh more heavily on our legislators than the voices from below,” the pastoral letter read.

A government official later claimed it was a violation of the principle of separation of church and state. However, the NCCP seconded the CBCP’s pastoral letter, adding it aims to fulfill church leaders’ prophetic duty to “announce and denounce the ills of society.”

Church leaders were assisted by lawyers from the Public Interest Law Center, July 24.