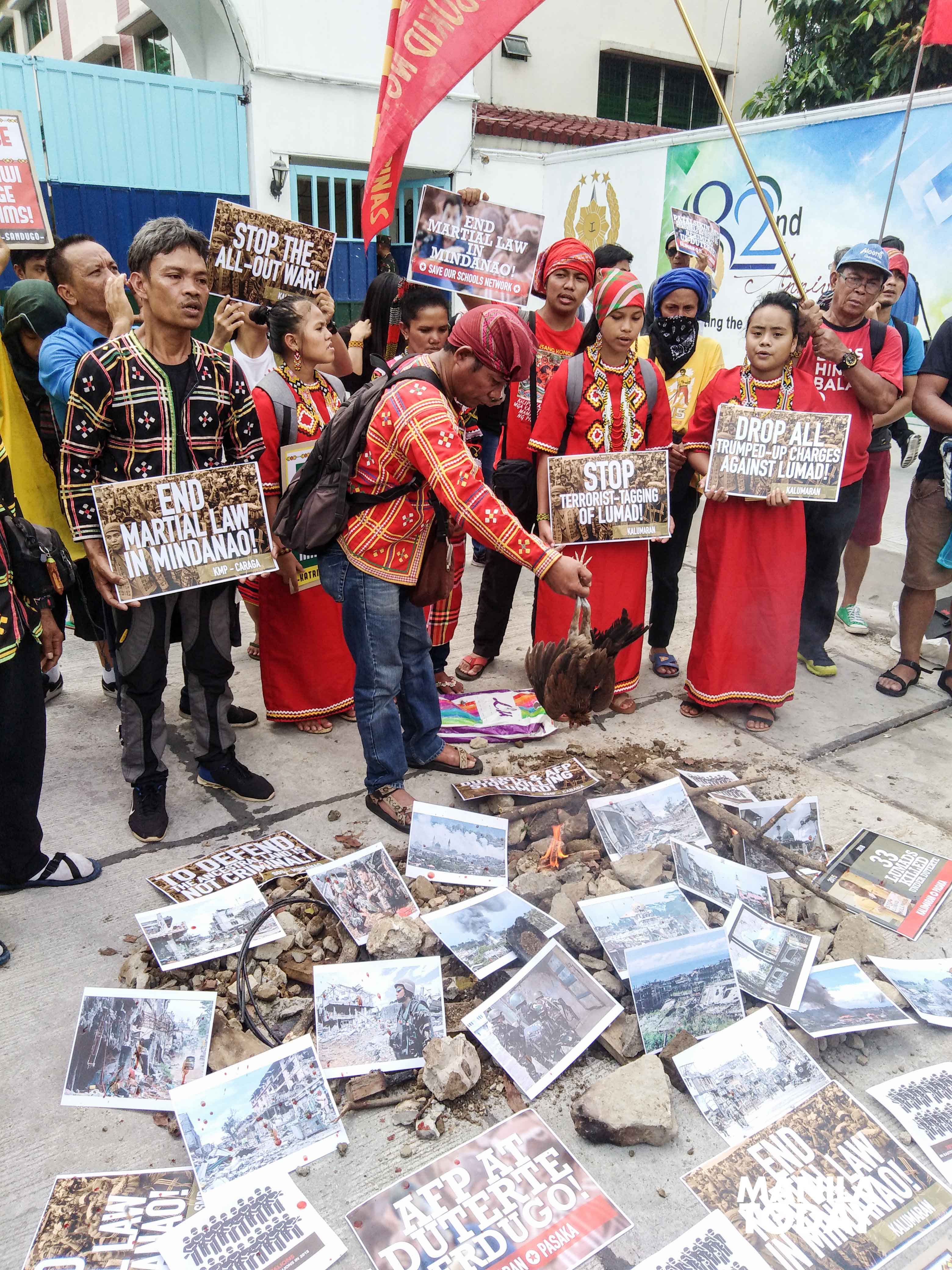 The all-out war of The Armed Forces of Philippines against ISIS-inspired Daulah Islamiyah or the Maute group and the extension of martial law in Mindanao has turned Marawi City to a city of rubble.

Filled with anger against President Duterte’s “anti-people directives”, Lumad, student, and peasant groups marched in front of Camp Aguinaldo earlier today. They arranged pieces of rubble by the gate to symbolize what has become of Marawi City — in shambles. The Islamic city has been reduced to debris as residents return to seek rehabilitation and indemnification from the government.

Yet, a year after the crisis broke out and several months since the military declared Marawi a liberated area, justice remains elusive to the thousands displaced.

Beyond Marawi, Mindanaoans have been subjected to various forms of human rights violations. Eleven thousand people were forced to leave their homes and personal property due to aerial bombardment in Lumad communities. On April 26, elements of the AFP bombed South Cotobato, adding to the number 517 Lumad evacuees.

Seventy-four AFP battalions with 41 Moro-focused battalions are deployed all over Mindanao. Duterte’s threat in July 2017 to bomb Lumad schools were met with compliance by the military; 19 schools were destroyed and 54 forcibly closed. Two-hundred Lumad students failed to graduate in March.

In a bid to end the communist armed movement this year, the military forced 2,300 people to surrender even though they were not members of the New People’s Army.

The suspension of the writ of habeas corpus made illegal arrests possible among those actively criticizing Duterte and his policies. The latest cases are Clarito Suarez, 70, and Ricmic Budta, 17. Both are residents of Barangay Salvacion, Trento, Agusan Del Sur and were illegally arrested while they were tending to their farm on May 9.

It is apparent that the presence of the Maute group was only used as a pretext to impose martial law in Mindanao. The deployment of thousands of troops in key areas in Mindanao can be seen as “investment defense forces” to drive away resisting communities from their ancestral lands. Duterte’s justification of the extension of martial law, i.e. combatting the communist insurgency, does not warrant the extrajudicial killings, illegal arrests, harassment cases, and other human rights violations of non-combatants.

But the Lumad and Moro people do not lose hope, for their hope is one founded on collective struggle. “The national minorities long for a just peace in Mindanao. We will always work for a just and lasting peace for as long as it takes. Even if we have to resist Duterte’s martial law and All-Out War,” Jerome Aba of Sandugo said.

The post City of Rubble appeared first on Manila Today.