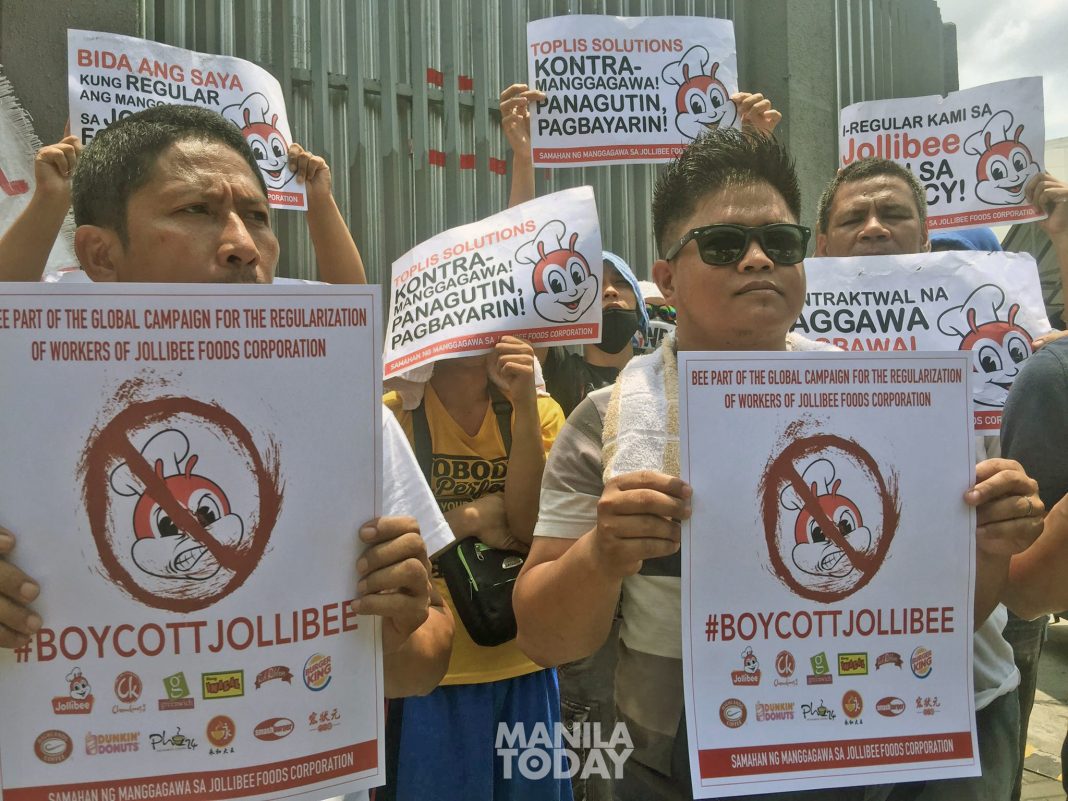 #BoycottJollibee. Today, terminated workers of Jollibee Foods Corporation (JFC) under the Samahan ng Manggagawa sa JFC (SM-JFC) called on the public to refrain from eating at Jollibee and its subsidiaries after their management remained silent to their demands for reinstatement and regularization.

Protesting workers were camping outside JFC’s main warehouse along the West Service Road in Parañaque City since June 28 after JFC terminated its agency contracts with Toplis Solutions and Staff Search Agency, service contractors in the said warehouse, that resulted to the mass lay-off of workers.

“We humbly ask the public and loyal customers of JFC across the country and even overseas not to support its products for the meantime until Tony Tan Caktiong will have a heart and will listen to our demands and until JFC will learn how to follow orders of the Labor Department and our government regarding the regularization of its workers,” said Rogelio Magistrado, president of SM-JFC.

The SM-JFC and pro-labor group Defend Job Philippines said the #BoycottJollibee is a global campaign to support to the thousands of JFC workers’ call for regularization. They also clarified that they are calling for regularization directly to JFC, the primary company, and not to the agency.

The Department of Labor and Employment’s (DOLE) compliance order to the Caktiong-owned.

The results of the inspection conducted by DOLE of the JFC main warehouse was initially expected to come out this week, but would now be expected any day this month. The dismissed workers said that DOLE findings should be similar to JFC crew and should also order their regularization.

According to the SM-JFC and Defend Job Philippines, their boycott campaign cuts across JFC and all of its subsidiaries and affiliates here and abroad including Jollibee, Chowking, Greenwich, Red Ribbon, Yong He King, Hong Zhuang Yuan, Mang Inasal, Burger King, Highlands Coffee, Pho24, 12 Hotpot, Dunkin’ Donuts, and Smashburger.

“We also urge the public to look for other options as form of a strong pressure to JFC to look after the welfare and concerns of its workers, who were the main reason for the growth of the company for the longest time now. This boycott campaign must teach JFC an important lesson of taking care of its workers and not just treat us as its slaves,” Magistrado added.

DOLE should see through its own compliance order

The SM-JFC and Defend Job Philippines also called on President Rodrigo Duterte and Labor Secretary Silvestre Bello III to intervene on their disputes with the JFC management.

According to Magistrado, the national government must do something significant in pushing through the implementation of its prior compliance order against JFC’s LOC practices.

Magistrado insisted, “We hope that the DOLE order will not just stay in papers and that the Duterte government will not remain mute spectator while termination of thousands of workers and agency contracts continue.”

The group said that they are planning to bring their issues closer to President Duterte in the days to come leading to his third State of the Nation Address (SONA). Magistrado said that Duterte must not let the issue of regularization of workers be plain talk.

“We challenge President Duterte to show his decisiveness and push JFC to implement the government’s own ruling for regularization of its workers. President Duterte must strongly enforce the law against capitalists like Tony Tan Caktiong for the benefit of the Filipino workers.” Magistrado ended.