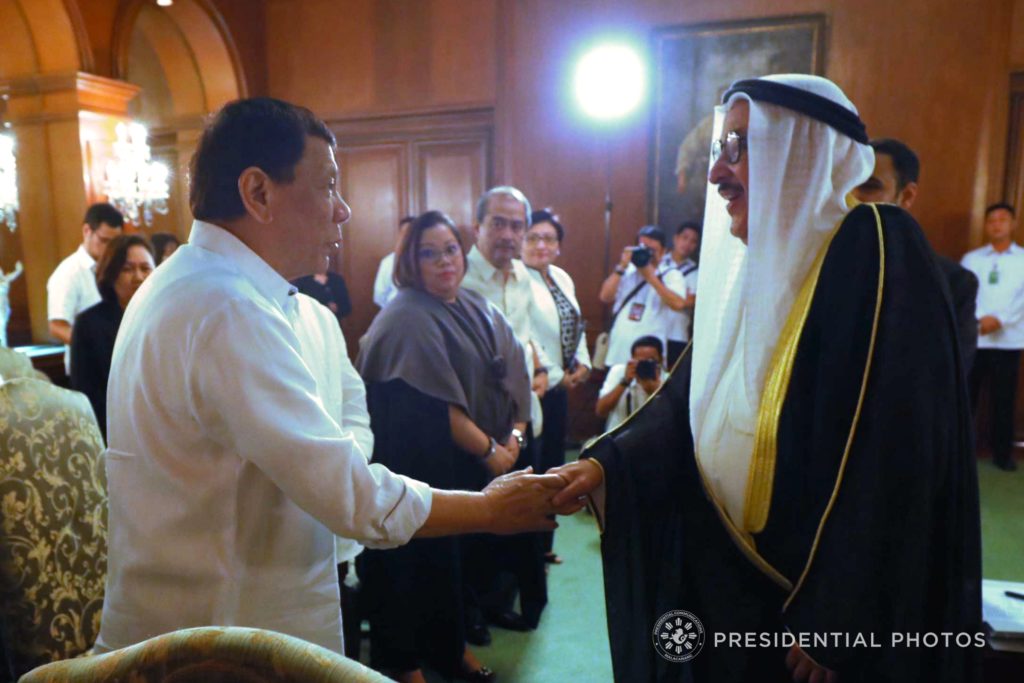 President Rodrigo Roa Duterte greets Ambassador of Kuwait to the Philippines Saleh Ahmad Althwaikh who met with the President at the Malacañan Palace on February 7, 2018. ACE MORANDANTE/PRESIDENTIAL PHOTO

President Rodrigo Duterte on Friday pleaded to the Kuwaiti government to keep overseas Filipino workers (OFWs) “free from harm” as the body of a Filipino woman was found inside a freezer in Kuwait City on Wednesday.

Duterte, who identified the OFW as Joanna Daniela Dimapilis, said the ban on the deployment of OFWs in Kuwait would continue.

“We do not intend to offend any government or anyone, but if ban is what is needed, then let it be so. The ban continues today, I don’t know up to what time. I declared it early this morning. P*t*ng *na, hindi ko ba masikmura. It is totally unacceptable to me,” Duterte said in a press conference in Davao City.

He urged the Kuwaiti government to do something about the abuses against Filipino workers in the Gulf state.

“Let me ask, when will this inhumane treatment of our Filipino workers end? When will the upliftment of the human dignity begin? To the Kuwaiti government and all others, we seek and expect your assistance in this regard,” he said.

“We do not seek special treatment or privileges for our workers but we do expect respect for their dignity and basic human rights. Keep them free from harm. I implore you. Nakiki-usap ako sa lahat ng Arabo (I am pleading to all the Arabs), the Filipino is no slave to anyone, anywhere and everywhere,” he said.

“Every unlawful physical injury that is inflicted on an OFW is an injury [that] I personally bear as the head of this Republic,” he added.

The President said the abuses against OFWs in the Gulf State was “an affront” to the sovereignty of the Philippines.

“Every abuse committed against an OFW is an affront against us, as a sovereign nation. [All that] I ask [for] our overseas Filipino workers, is that their dignity is honored and the rights of a human being, upheld and respected,” he said.

“We send to you a Filipino worker, hale and hearty, determined to work his heart out in order to give his family a decent and comfortable life in the Philippines. Do not give us back a battered worker or a mutilated corpse,” he added.

If foreign countries will not protect and give justice to abused OFWs, he said, he was willing to “take drastic steps” to preserve the Filipinos.

“If the Philippine government is reduced [into] helplessness because other foreign governments do not heed our requests to protect and give justice to our overseas Filipino workers within the limits that their laws allow, then let me say this both as a matter of personal conviction and national policy, [that] I am ready to take drastic steps that will help preserve Filipino life and limb,” he said.  “We do not intend to offend any government or anyone. But if a ban is what is needed, then let it be so.”

Duterte will visit Kuwait “any day” soon to see for himself the situation of Filipinos working in the oil-rich kingdom, Presidential Spokesperson Harry Roque said on Thursday. /jpv