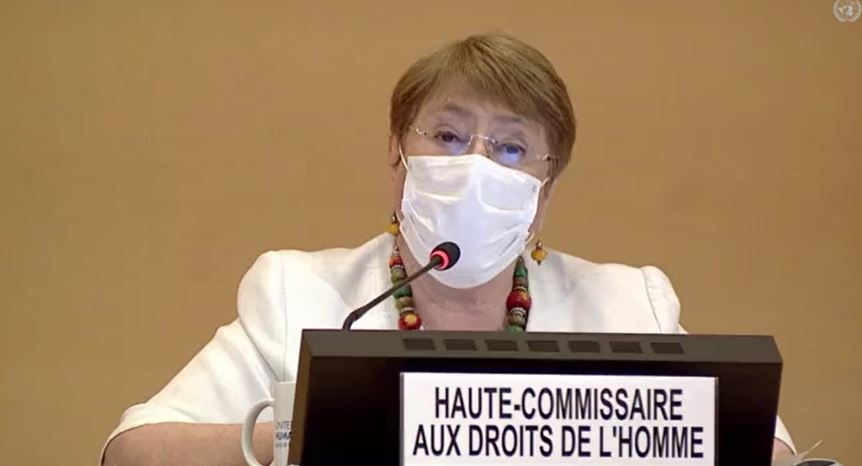 “It is not enough to argue that the Government’s heavy-handed policies remain popular in the country. Because victims tend to be from lower socio-economic classes and relatively disempowered communities, there is an even stronger imperative to ensure their protection. We must not let them down. Political leadership is about respecting, promoting and protecting the rights of everyone in society, in particular the most vulnerable, so as to leave no one behind.” — UN High Commissioner for Human Rights Michelle Bachelet

MANILA – For four years, President Rodrigo Duterte undermined people’s basic human rights such as the right to life and the right to due process.

The recent comprehensive report of United Nations High Commissioner for Human Rights Michelle Bachelet  highlighted the extrajudicial killings and other rights violations under the government’s campaign against illegal drugs and counter-terrorism.

“The human rights situation in the Philippines is marked by an overarching focus on public order and national security, including countering terrorism and illegal drugs. This focus has permeated the implementation of. existing laws and policies and the adoption of new measures, often at the expense of human rights, due process rights, the rule of law and accountability. Thus, while there have been important human rights gains in recent years, particularly in economic and social rights, the underpinning focus on national security threats – real and inflated – has led to serious human rights violations, reinforced by harmful rhetoric from high-level officials,” the report of the UN High Commissioner read.

Due to the gross violations of human rights in the Philippines, international civil society organization CIVICUS has included the Philippines in its Monitor Watchlist.

The watchlist is a list of countries where respect of civic freedoms protected by international law has been declining. The Philippines is rated by the CIVICUS as obstructed, where “civic space is heavily contested by power holders, who impose a combination of legal and practical constraints on the full enjoyment of fundamental rights.”

CIVICUS said that the country was included in the watchlist for targeting independent media and journalists for their reporting; the emergency powers brought about by COVID-19 pandemic and the impending passage of the Anti-Terrorism Act of 2020 which it said is putting human rights at further risk; and, the criminalization and red-tagging of activists which pose a serious threat to civil society.

As of June this year, Karapatan has documented at least 318 victims of extrajudicial killing under Duterte administration’s counterinsurgency program along with the thousands killed in campaign against illegal drugs. The most conservative figure based on government data suggests that over 8,600 have been killed in the so-called anti-drug operations.

From its own investigation, the Office of the High Commissioner on Human Rights (OHCHR) verified the killings of 208 human rights defenders, journalists and trade unionists, including 30 women in January 2015 and December 2019.

In a span of four years, the rights watch group also recorded at least 456 victims of frustrated extrajudicial killings, 3,531 victims of illegal arrests on top of the thousands arrested in the enforcement of community quarantines across the country.

There are also 214 who are tortured, 805 victims of illegal search and seizure, and 456,103 victims of forcible evacuations.

Under Duterte, 635 activists were arrested and detained, most of whom were charged with trumped-up criminal charges. At least 95 of them have various ailments, including life-threatening diseases; 53 are elderly and 100 are women.

The rights groups maximized all legal remedies available in the country as well as international platforms to hold into account the perpetrators . Aside from filing complaint before the International Criminal Court (ICC), they also submitted complaints to the UN as the High Commissioner.

The OHCHR has received 893 submissions including the submissions by the Philippine government. High Commissioner Michelle Bachelet presented her report to the UN HRC during its 44th Regular Session in Geneva, Switzerland on June 30.

Aside from the submissions, the OHCHR based its report from official data and documents from the government and non-government organizations including legislation, policy guidelines, court documents, police reports, videos, photos and open source reports as well as interviews with the victims and the witnesses, remotely and in person.

The OHCHR team, however, was not allowed by government to visit the Philippines.

On Duterte’s so-called war on drugs

One of the highlights of the OHCHR report is the extrajudicial killings of suspected drug users and children in the implementation of the campaign against illegal drugs.

In its investigation, the OHCHR established a pattern of planting of evidence by police officers. It cited as an example the seven handguns, each with unique serial numbers, which were found in at least two separate crime scenes. Two of the handguns also re-appeared in five different crime scenes.

This casts doubt on the self-defense narrative by the police, the report said, adding that it is likely that the victims are unarmed at the time of the killing.

The OHCHR also underscored the impunity in the drug-related killings, with only the case of 17-year-ols Kian delos Santos ‘being solved.’ “This outcome owes much to the availability of CCTV footage and public outrage following the murder,” the report said.

While there are 9,172 police personnel faced administrative cases, it is unclear however how many are related to extrajudicial killings. It added that the “administrative sanctions are insufficient where there are serious allegations of violations of the right to life.”

It added that the police cannot invoke the “presumption of regularity” as the Philippines is obliged under the international human rights law, “to establish rules and procedures for mandatory reporting, review, and investigation of lethal and other life threatening incidents by law enforcement personnel.” “Where there are allegations that it knows or should have known of potentially unlawful deprivations of life, it has the duty to investigate and, where appropriate, prosecute the perpetrators,” the report read.

The report also noted the arrest of 223,780 “drug personalities” from July 1, 2016 to December 2019 saying that the “lack of clarity, coupled with due process irregularities, raises concerns that many of these cases may amount to arbitrary detentions.”

The OHCHR also raised concern of the drug rehabilitation programs which it said “runs counter to the provision of evidence-based medical treatment and rehabilitation services.”

The report also said that the approach of the government in the drug rehabilitation program. The 2002 Comprehensive Dangerous Drugs Act which requires mandatory drug testing and reporting of drug users in public facilities – including secondary schools, “may breach the right to privacy, generate stigmatization, and constitute degrading treatment.”

The OHCHR also noted the lack of harm reduction programs in the rehabilitation of the the drug users. It said that the law for one imposes severe sanctions such as “prison sentences for mere possession of small amounts of illegal drugs. Criminalization of personal use, coupled with disproportionate sentencing, hinders people from obtaining appropriate treatment for drug use.”

During the interactive dialogue at the 44th regular session, Bachelet also stressed out that illegal drug problems requires public health approach. She said that there are countries which have such approach ad have resulted a positive outcomes in their fight against illegal drugs.

Read: The drug menace as a health problem

The report noted that the vilification of legal activists resemble to the characteristics of the anti-illegal drug campaign, “notably a presumption of guilt and lack of due process or effective oversight – this time against those suspected of supporting the CPP-NPA. [Communist Party of the Philippines-New People’s Army]”

The OHCHR said that “for decades, the red-tagging or labeling individuals and groups as communists or terrorists – has been a persistent and powerful threat to civil society and freedom of expression.”

The reported cited the killing of four human rights defenders in 2018 whose names appeared in posters and hit lists of supposed CPP-NPA-NDF personalities that circulated in Negros. Among them are Haide Flores, lawyer Benjamin Ramos Jr, city councilor Bernardino Patigas, and lawyer Anthony Trinidad, whose cases remain unsolved.

It added that despite the Administrative Order 35, a mechanism which is currently in place to resolve political killings and other rights violations, “the government has failed to ensure transparent, independent and effective investigations and prosecutions in the vast majority of cases.”

Of the 383 cases since 2001, only 13 have resulted in convictions, 216 have been either dismissed or archived.

The report also noted the “widespread killings, detentions, red-tagging and score-settling by State actors, including in the campaign against illegal drugs, suggest that his public comments may have incited violence and may have had the effect of encouraging, backing or even ordering human rights violations with impunity.”

The OHCHR it could be a violation of the prohibition against arbitrary deprivation of life in Article 6 of the International Covenant on Civil and Political Rights.

At the regular session, Bachelet urged the HRC to “remain active and vigilant on the situation in the Philippines.”

With this, she urged the Council to mandate her Office to “continue monitoring and reporting, as well as through support for technical cooperation to implement the report’s recommendations.”

Among her recommendations is the need for “independent, impartial and effective investigations into the killings.” She said her Office is ready to assist efforts towards accountability at the national and international level.

She urged the Philippine government to cooperate with the OHCHR and the UN Human Rights mechanisms such as inviting the Special Procedures mandate-holders or the Special Rapporteurs to monitor and report on specific human rights concerns in the country; invite OHCHR to strengthen its provision of technical assistance, inter alia, to advise on reviewing counter-terrorism legislation, adopting human rights-based approaches to drug control, strengthening domestic investigative and accountability measures, improving data gathering on alleged police violations, and to assist in bridging the gap between civil society and State authorities.

“The State has an obligation to conduct independent investigations into the grave violations we have documented. In the absence of clear and measurable outcomes from domestic mechanisms, the Council should consider options for international accountability measures,” Bachelet said.

She added that the families of victims and courageous human rights defenders are relying on the international community to help them in addressing the serious human rights issues – and “for the Council to rise up to its prevention mandate.”

“It is not enough to argue that the Government’s heavy-handed policies remain popular in the country. Because victims tend to be from lower socio-economic classes and relatively disempowered communities, there is an even stronger imperative to ensure their protection. We must not let them down. Political leadership is about respecting, promoting and protecting the rights of everyone in society, in particular the most vulnerable, so as to leave no one behind,” Bachelet said.

To read the full report of the OHCHR, please click here. https://www.ohchr.org/Documents/Countries/PH/Philippines-HRC44-AEV.pdf