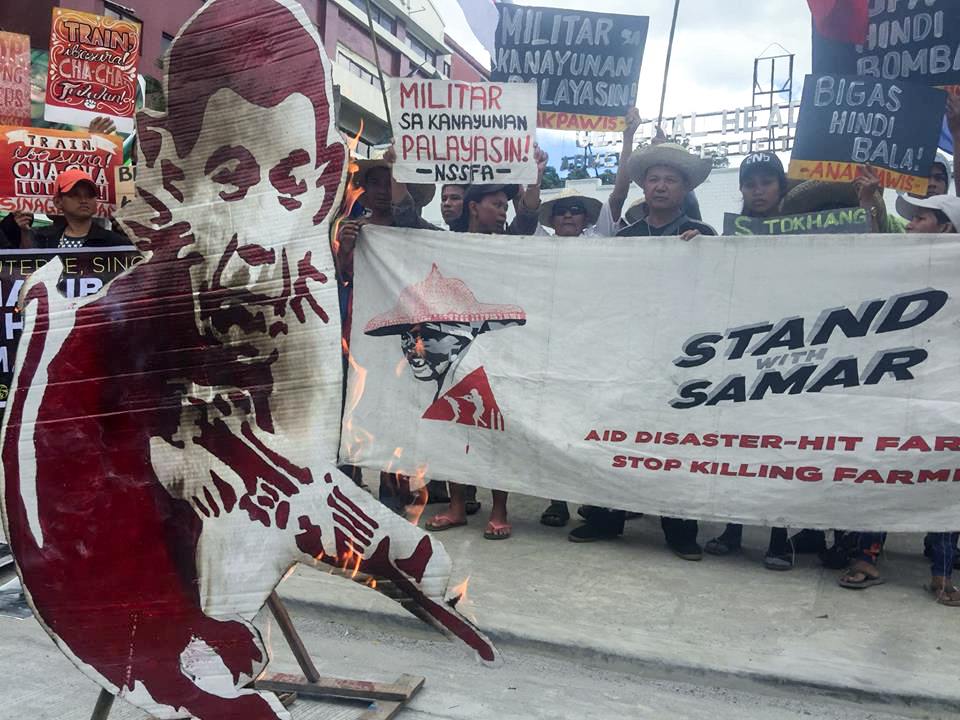 We are activists with legitimate causes. We are not drug peddlers as no one deserves to be killed under Tokhang.

This has been the statement of the members of the Northern Samar Small Farmers Association (NSSFA) as they protested at the gate of the Department of National Defense (DND) general headquarters in Camp Aguinaldo in Quezon City today to denounce the “Tokhang-style counter-insurgency and crackdown operations being executed by the Armed Forces of the Philippines in the entire Eastern Visayas region.”

During the protest, Gina Rosco, 59, NSSFA leader, decried the spate of harassment and rights violations committed by elements of the AFP in her province in the guise of anti-narcotics operations.

Rosco exposed that the AFP’s 20th Infantry Battalion is now using the controversial anti-drug campaign of the Philippine National Police (PNP) that has left at least 7,000 dead in police and vigilante operations as human rights groups claim to commence its crackdown against legal activists.

“Contrary to the strong and tough image President Duterte flaunts, the present government must actually be so weak that the people who only use their principles, convictions and unity would be retaliated by his government with summary killings. He is a coward!” Rosco said.

Rosco recalled her experience when elements of the 20th Infantry Battalion along with their ‘intelligence assets’ went to her home in Las Navas town, started convincing her to present herself to the military as an NPA surrenderee so she can claim cash rewards.

Unswayed with the huge sum of money offered by the military, Rosco refused to do what the military instructed her to do, and that was when a flurry of death threats were used by the soldiers against Rosco. “I can still vividly recall when they said that if I will be consistent in refusing to do as they say, I will be next on their hitlist, as Tokhang will be their new tool against us farmers,” claimed Rosco.

Protesters also burned a 5-foot effigy of President Duterte depicted as “Boy Ratrat,” a large armed rat. The group decried that the AFP is hell-bent in forcing ordinary and civilian farmers to surrender as members of the New People’s Army (NPA) for the military’s “money-making scheme.”

Rosco exposed that a sum of P140,000 is being claimed by the AFP as bounty for every “fake surrenderees” they present.

The Kilusang Magbubukid ng Pilipinas (KMP) said that farmers in peasant communities in the countryside are the primary targets of the AFP “surrender campaign.” “This ‘surrender campaign’ going on nationwide is part of the government’s Oplan Kapayapaan.

This is a massive campaign to threaten, harass and intimidate farmers, local peasant leaders and barrio folks into falsely admitting that they are members or former members of the NPa,” said Antonio Flores, KMP secretary general.

Flores cited that according to their local members in barrios and municipalities, the most common tactic used by state-agents is “to threaten farmers and community residents to surrender or die or be arrested.”

The KMP leader added that farmers who are red-tagged by the AFP as NPA or NPA supporters often end up as victims of extra-judicial killings or threatened with illegal arrest and detention.

KMP said that in Eastern Visayas alone, this surrender drive had been going on in Samar since last year and is a major component of the AFP’s militarization campaign.

According to the group, in Gamay, Northern Samar, farmers are being asked to present their identification cards whenever they are seen by AFP soldiers in their farms and rice fields. Soldiers told farmers that they should always present their ID cards to prove that they are not NPAs. This “ID system” also exists in other parts of the region.

In Las Navas town also in Northern Samar, farmers and local village officials are being invited to the municipal hall to sign documents attesting that they are surrendering to the rule of law. Residents of Basey, Samar were framed and presented by the military as fake surrenderees. Civilians are also threatened by the AFP that they are included in the list of “NPAs and supporters”.

In September 2017, the 87th IB based in Calbiga, Samar convened the barrio captains and told them to convince constituents who actively support the NPA to surrender before Duterte declares martial law nationwide.

On top of the issue of fake surrenderees in their province, NSSFA stressed out that “2017 was the year fire rained down from the skies of Matuguinao, Samar as planes from the Philippine Air Force conducted aerial bombing operations in Barangay Mahayag.”

The assault caused massive evacuations from upland communities similar to that of the 14 barangays from Calbiga, Samar who evacuated by the thousands April last year due to military encampment in their houses.

A food blockade was meanwhile separately authorized and enforced by the AFP in Burauen, Leyte and in the villages of San Miguel and San Isidro in Las Navas, Northern Samar last year. The blockade, as what the AFP declared to the communities is predicated by the presence of the communist rebels in the area. The farmers meanwhile, believe otherwise.

“There is money on top of our heads. The soldiers need to meet a certain number of surrenderees so they can claim the money for it. That is why they wanted us unarmed farmers to present ourselves as surrenderees en masse so they can rake in money, while trampling on our dignity and basic rights,” said Rosco.

Reports from local human rights watchdog Katungod – Sinirangan Bisayas also reveal of minors being used by the military for their publicity stunts.

The case of Jimboy Obiado for example shows how the military tagged him as a member of the NPA on the sole and flimsy basis of carrying rice from their home to barangay Tubang, Las Navas last year.

Aside from Obiado, three more civilians in their region, identified as Bernadette Lutao of Bobon, Northern Samar; Ronnel Baldonado from Matuguinao, Samar and Jason Montalla from Albuera, Leyte were killed in separate incidents since 2017. They were all red-tagged by the military.

Farmers who are affected by agricultural infestation in Samar provinces relocate to upland farms and hinterlands to seek other sources of livelihood but intense militarization prevents them from doing so.

Eastern Visayas farmers are also protesting the creation of a new army battalion in Eastern Visayas or the 93rd Infantry Battalion called ‘Bantay Kapayapaan.’ The new battalion will be based at Camp Eugenio Daza in Fatima village, Hinabangan, Samar.

Amid growing tension in the local scene, the 8th ID will have 4 more battalions assigned to Eastern Visayas on top of the 7 already deployed in the region, according to Bayan Eastern Visayas.

The formation of new battalions will be made after President Rodrigo Duterte tagged the NPA as a terrorist organization thus prompting the deployment of Marawi-based army units to Region 8, commonly referred to as an “enduring fortress of the communist movement in the Philippines”.

In a statement, Bagong Alyansang Makabayan Eastern Visayas (Bayan-EV) considers the move a bold declaration of war against an impoverished people considering that the military as repeatedly committed crimes against the people of Eastern Visayas amid peaceful methods like dialogues and petitions being employed by civilian groups to have them pulled out.

“We do not need another army battalion to harass, threaten, and intimidate civilians in Eastern Visayas. Farmers are actually demanding the immediate pull-out of seven other army battalions — 20th, 43rd, 14th, 87th, 52nd, 19th and 78th Infantry Battalions under the 8th Infantry Division operating in Eastern Visayas,” said Jun Berino of Sinirangan Gudti Han Ngan Parag-uma – Sinirangang Bisaya (SAGUPA-SB) who stressed that Martial-law like conditions in Region 8 should be known by the public.

The NSSFA and the SAGUPA-SB aired their demand for the immediate pull-out of military from peasant communities. The Stand With Samar Caravan For Justice is now on its second week of activities here in the National Capital Region to seek remedy to the farmers’ woes.

These have been the reasons why Eastern Visayas farmers march all the way from home.

Rosco said, “We condemn the state-perpetrated killings and harassment cases ranging from unsuspecting farmers to entire barangays ever since President Duterte declared his all-out support to the AFP whatever they may do even if it would entail rights abuses.”

“Our families and neighborhoods will be marching from the mountains of Northern Samar, the shores of Biliran and the plains of Leyte to unmask the pro-poor mask of Duterte, that in the hinterlands, we all know that his government has been the top terrorist and human rights violator, and everyone should know that,” Rosco said.