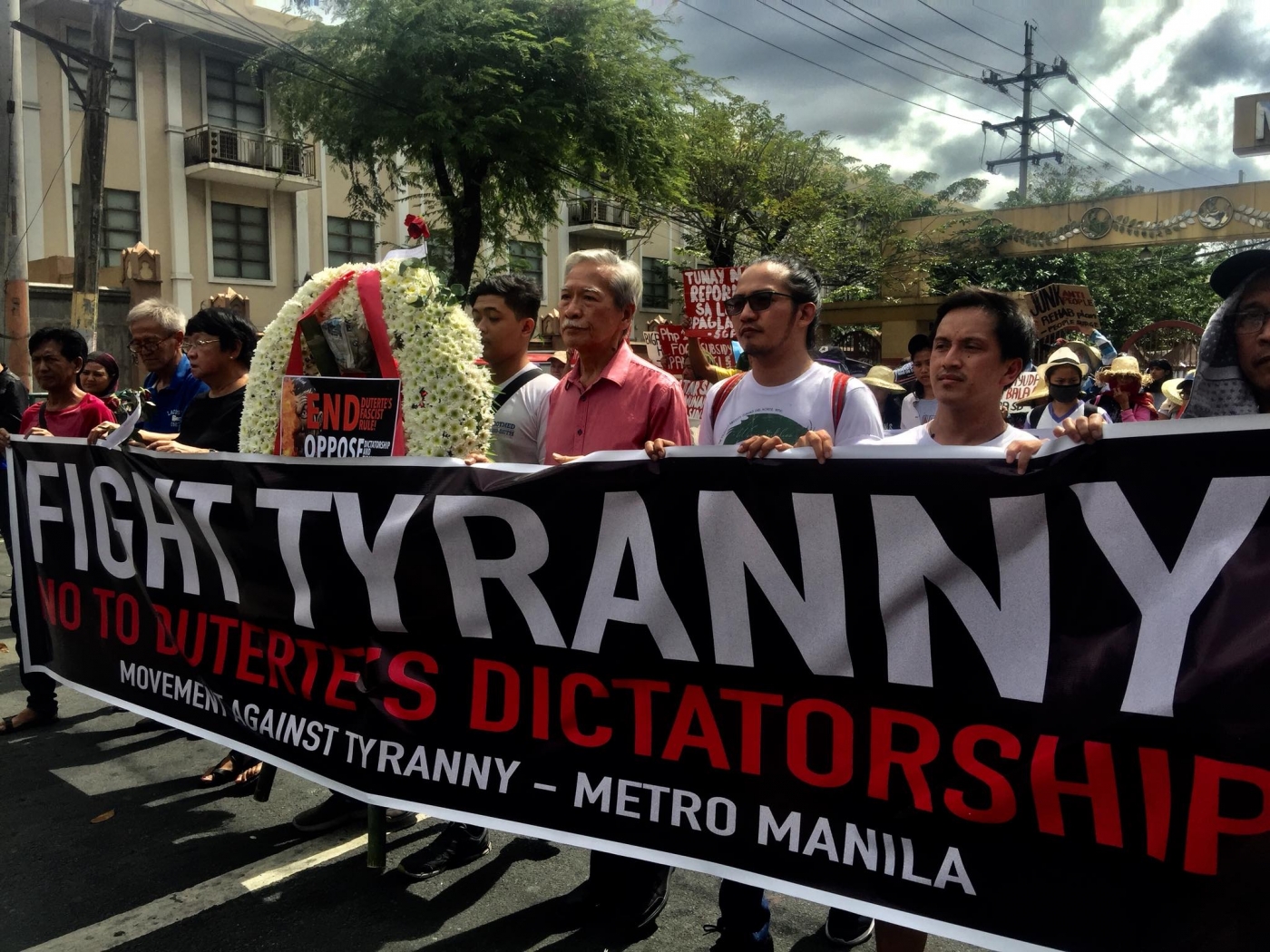 In time for the 32nd year of the EDSA People Power 1, members of Movement Against Tyranny – Metro Manila, Bayan Metro Manila, Rise Up for Life and for Rights – Metro Manila, People Surge and Stop The Killings Network held a wreath-laying and candle lighting ceremony at the historic Don Chino Roces Bridge in Mendiola, Manila today.

According to the groups, Mendiola was the site of countless anti-Marcos protests. From the First Quarter Storm of 1970 to the storming of the Palace in 1986, Mendiola came to symbolize the people’s quest for the return of democracy.

The groups dramatized the storming of millions of people to the Presidential Palace on February 25, 1986 that toppled down the dictatorship of the late President Ferdinand Marcos.o

They also placed flowers and photos of martial law activists and martyrs at the barricades in Mendiola as tribute to the real heroes of the EDSA People Power.

“The barbed wires of Mendiola and the steel barriers protecting the Malacanang Palace reflect the continuing great divide in the nation. 32 years after EDSA, our situation remains the same: poverty and inequality persist, democracy is under attack, and our rights are violated with impunity,” said Mong Palatino, chairperson of Bayan Metro Manila and convenor of Movement Against Tyranny Metro Manila.

Palatino added, “We honor the heroes of People Power, the brave Filipinos who defied the dictatorship and fought for the restoration of our civil liberties and democracy. Their sacrifice will not be forgotten. Their memories will be kept alive by those they inspired to continue the noble fight for real freedom and just peace.”

In the activities today in Mendiola, protesters also slammed the present administration of President Duterte over his “worsening dictatorial and tyrannical rule.”

The groups denounced the various “anti-people” policies of Duterte including his drug war, Charter change, martial law in Mindanao, curtailment of press freedom, crackdown on activists, killings of farmers and government critics, TRAIN Law among many others.

Palatino said, “Our martial law activists and martyrs defeated tyranny by building the people’s resistance and empowering the grassroots. We will defeat another rising tyrant by reliving the lessons of People Power. The best tribute to the unsung heroes of EDSA is to fight the return of another dictator.”

“Never again. Not in our lifetime will we allow another despot to curtail our rights and destroy the future of our country,” Palatino ended.