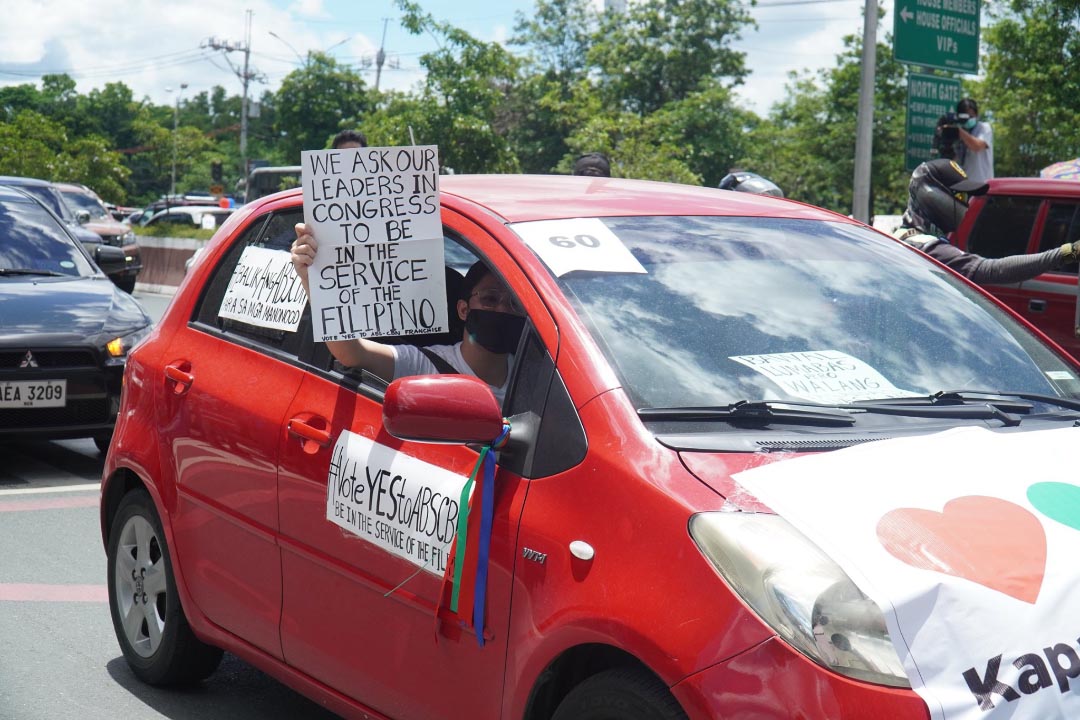 “To our congressmen, please vote for ABS-CBN. Please vote yes for our families. I hope you will heed our calls.”

MANILA – At least 140 vehicles of employees and supporters joined the motorcade to the House of the Representatives July 9, in an attempt to urge lawmakers into voting ‘Yes’ for ABS-CBN’s bid for legislative franchise.

Led by the National Union of Journalists of the Philippines, the motorcade started in front of ABS-CBN’s Esguerra Gate. The vehicles were adorned with balloons or ribbons in blue, green and red, which symbolize ABS-CBN.

The group held a 30-minute program outside the gates of Batasang Pambansa, with employees and supporters chanting their calls, “Defend Press Freedom” and “No to Shutdown.”

In his speech, Jon Villanueva, president of the Rank-and-File Employees’ Union of ABS-CBN, appealed to the lawmakers on behalf of more than 11,000 employees who stand to lose their jobs if ABS-CBN stays off-air.

“We remain scared knowing that any time, we might lose our jobs,” Villanueva said.

According to ABS-CBN CEO Carlo Katigbak, the broadcasting giant will be forced to retrench its workers by August if they are not granted another franchise.

“To our congressmen, please vote for ABS-CBN. Please vote yes for our families. I hope you will heed our calls,” Villanueva said.

Bayan Muna Representative Carlos Zarate joined the ABS-CBN employees gathered outside the gates of the Congress.

Zarate, a former journalist, mentioned that the 12-marathon hearings proved that ABS-CBN in fact, did not violate their legislative franchise, hence, there’s no reason for the Committee of Legislative Franchise to deny the broadcast company their 25-year renewal.

“Now the ball is in the hands of our congressmen, particularly the members of the Committee on Legislative Franchise. Let us hope that they will vote for what is right, and give ABS-CBN another franchise,” Zarate said.

House Committee on Legislative Franchise Chairperson Rep. Franz Alvarez said that they will make a draft of all the recommendations regarding ABS-CBN’s application for legal franchise in order to “have a systematic and organized consideration of both sides.”

Members of the committee will be casting their vote on ABS-CBN’s franchise today, June10.

During the last hearing, lawmakers accused ABS-CBN for their alleged ‘biased reporting,’ particularly during the 2016 elections. However, NUJP maintained that this should not be a basis for the legal franchise bid.

“It is not the journalists’ job to take care of politician’s feelings,” said NUJP Secretary General Dabet Panelo.

“Our job is to report accurately, and independently. Our job is to make sure that politicians are also doing their jobs correctly.”

The National Telecommunications Commission issued a ceast and desist order against ABS-CBN on May 5 pending the decision of Congress on the network’s franchise bid.