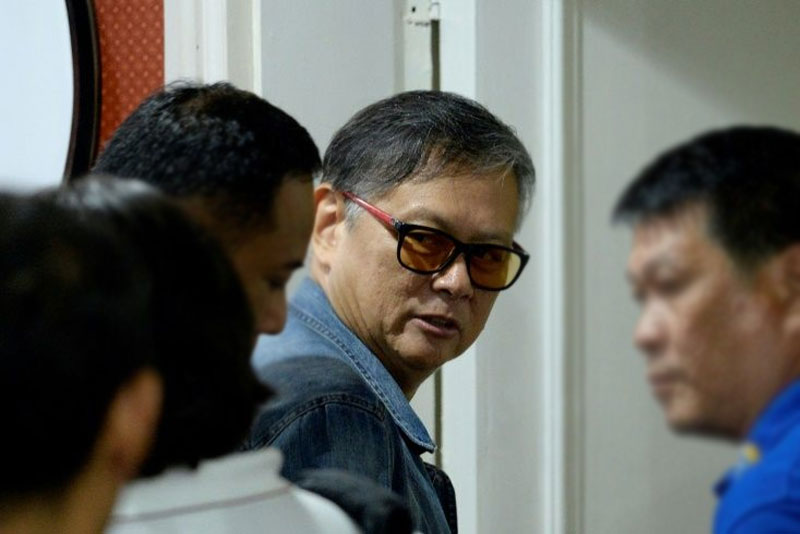 MANILA, Philippines — Former Palawan governor Joel Reyes yesterday surrendered before the Sandiganbayan, a few hours after the anti-graft court released a ruling ordering his arrest and revocation of the bail bond he had earlier posted.

Reyes was accompanied by his two children and his lawyer Demetrio Custodio when he surrendered before the court’s Sheriff’s Office. He was then escorted to the court’s Third Division handling his graft case.

“We respect the decision of the court, kaya nga po ako nandito (that’s why I’m here),” he said.

Following his surrender, Reyes was brought by the personnel of the Sheriff’s Office to the Quezon City Jail Annex at Camp Bagong Diwa in Taguig, where the court committed him for detainment.

In an interview with reporters, Reyes maintained that he is not a flight risk and is ready to face a tougher legal battle ahead.

“My surrender shows that I am not a flight risk and I am here to face this case together with my lawyer and my family,” he said in Filipino.

He admitted that he was saddened by the court’s decision but he respects it none the less.

“It has only been three weeks since I was reunited with my family after I was released from detention. Now we are going to part ways again. But I will face the case,” Reyes said.

Yesterday, the Third Division released to the media a resolution dated Jan. 17 ordering the revocation of the bail bond that Reyes earlier posted for his graft case in connection with the alleged anomalous renewal of the permit of a small-scale mining company in 2006 found to have been over-extracting mineral ore in Palawan.

The court sided with the prosecution that the former governor must remain in detention as he is a “flight risk,” given his previous record of fleeing the country to evade his murder case in connection with the killing of broadcaster and environmentalist Gerry Ortega in 2011.

“Indeed, accused Reyes managed to go to Thailand despite the existence of a hold-departure order against him. His return to the Philippines was not voluntary but was effected through a compulsory process resulting from his arrest by the authorities in Thailand,” the Third Division’s ruling read.

“These circumstances are most telling. They unquestionably evince the strong probability that accused Reyes might go into hiding again while his case is on appeal and thereby frustrate the ends of justice,” it added.

Reyes was released from the Puerto Princesa City Jail last Jan. 5 after the Court of Appeals, in a controversial decision, dismissed his murder case.

This prompted the Office of the Ombudsman’s prosecution team to file an urgent motion before the Sandiganbayan Third Division, praying to the court to cancel Reyes’ bail and order his commitment to prison.

Reyes, together with his younger brother, former Coron, Palawan mayor Mario Reyes, fled the county in 2012 after the Puerto Princesa regional trial court found probable cause to put them on trial for the murder of Ortega.

The Reyes brothers were arrested in a lavish resort in Phuket, Thailand in September 2015.