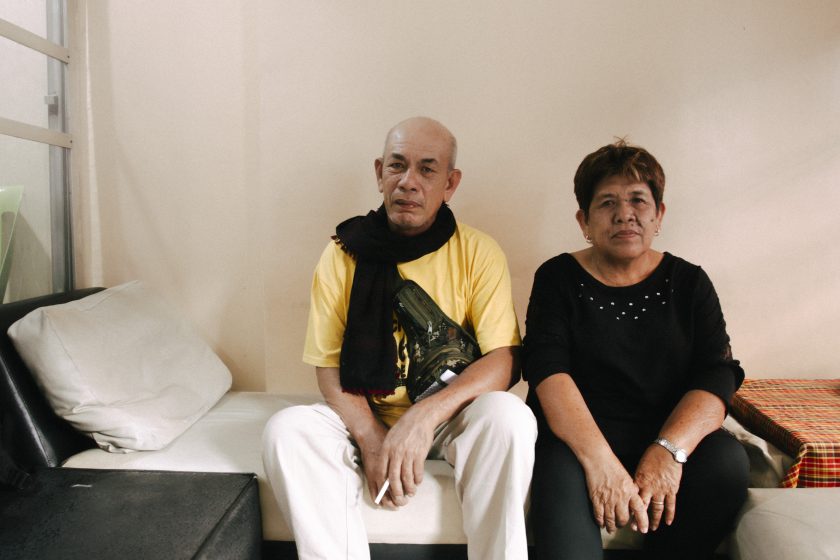 SICOGON, Iloilo — Raul Ramos is waiting. He has been waiting for a long time.

Ramos lives in Sicogon island, in the municipality of Carles, Iloilo, by the eastern coast of Panay. If you haven’t heard of Sicogon, imagine old postcards of Boracay, with jewelled coastlines, white beaches, and idyllic landscapes. Locals tell that those old Boracay postcards are of Sicogon.

In the ‘70s, the island was a favorite vacation haunt of the rich and famous, until development fell through. Yet the magic of Sicogon beckons anew, as a joint venture led by Ayala Land, Inc. scrambles to develop the island into the next big tourist destination. Already there are two operating upscale resorts in the island: Huni and Balay Kogon. There is an operating airstrip, servicing flights everyday.

In Ayala Land’s website, Sicogon is “touted as the newest tourism hub and Gateway of Western Visayas[,] guided by sustainable development through environmental preservation and active involvement of the local community.”

The 1,100-hectare Sicogon Island Tourism Estate “will feature a resort town center, hotels and resorts, as well as commercial and residential establishments,” according to Ayala Land’s 2016 integrated report. The company claimed that the masterplan for the island “was carefully thought out in consultation with the local community and field experts to ensure that biodiversity and eco-systems are maintained.”

The other party to the joint venture is the Sicogon Island Development Corporation (SIDECO), which owns large parcels of land in Sicogon. Of the total land area of 1,163 hectares, SIDECO owns 809 hectares. Two hundred eighty-two (282) hectares are classified as timberland, while the remaining 72 hectares (comprising of two parcels of land) are alienable and disposable land.

All seems well in the development of Sicogon island for tourism. But Ramos, who is a local kagawad and the president of the Federation of Sicogon Farmers and Fisherfolk Associations (FESIFFA), tells a different story.

The joint venture has allegedly displaced — and threatens to displace even further — the residents of the island. In what has been called a case of “disaster capitalism” in a 2018 Al-Jazeera report, Sicogon residents say corporations took advantage of the damage wrought by Typhoon Yolanda in 2013 and “left people with nothing.”

Before the storm hit, FESIFFA and local farmers have been assured that around 334 hectares of land owned by SIDECO will be covered under the Comprehensive Agrarian Reform Program (CARP).

The farmers also applied for free patents over Sicogon’s 72-hectare alienable and disposable land, and a stewardship agreement for the timberland under the government’s Community-Based Forest Management Program (CBFMP).

“We are pushing for Sicogon residents to have land of their own. In the first place, we are inhabitants of the island,” Ramos said in Filipino.

But all changed after the typhoon, when the Ayala-SIDECO joint venture started to execute plans for the island’s tourism development, with locals still reeling from Yolanda’s effects. Ninety-five percent of houses and all fish boats were totally destroyed, with humanitarian aid blocked allegedly due to the hindrance imposed by SIDECO’s armed guards.

Ramos said SIDECO took advantage of the situation. Some residents accepted Ayala and SIDECO’s offer to receive cash or a house located in a neighboring island. In exchange, they gave up their land rights in Sicogon. Others, like Ramos and other farmers part of FESIFFA, stayed. But not without living in fear of being ejected from their homes, or living under the shadow of a powerful business conglomerate.

Ramos said they have relied on the land for survival. Within it are virgin forests, rare species such as wild boar and pitcher plants, as well as a prized culinary ingredient: the batwan, a popular souring agent, which farmers sell for around ?300 per ganta.

Farmers alternate between cultivating crops and fruit trees and fishing as sources of livelihood. In Sicogon’s timberland, springwater is aplenty, and was then enough for all the locals living in the island’s three barangays.

It isn’t anymore. Ramos and his fellow farmers at FESIFFA decried how the spring water has been diverted to a boutique resort, creating a shortage for residents. They have been prohibited from fishing in front of the beach, which should have been open for everyone. They cite irregularities in the process by which other farmers have given up their land rights under the CARP.

They reported how the venture has been encroaching on public land — such as a local cemetery — through the construction of an airstrip. They recounted how ongoing projects have recklessly destroyed their crops. They recalled how many have been intimidated into submission when they protest the relentless construction, how ejectment cases have been filed against residents.

They also lamented the measly salaries that all the resident workers receive under the tourism projects, including hotels and resorts, when these projects earn so much more.

“Workers receive P350 per day. “They [Ayala] charge P10,000 for their room but they give pittance for their workers,” Ramos said.

Yolanda greatly weakened the farmers’ resolve and capacity to sustain what they had achieved before the typhoon. On November 8, 2014 — with Sicogon still reeling from Yolanda’s devastation — Ramos said he was pressured, without the assistance of counsel, to sign on behalf of FESIFFA a Compromise and Framework of Agreement (CFA) he had barely understood.

In the aftermath of Yolanda, the CFA was supposed to be a boon for Sicogon’s farmers and fisherfolk. Under the agreement, SIDECO and Ayala’s joint venture was supposed to provide the farmers a residential site of 30 hectares (plus ?76 million allocated for amenities and land preparations), an area for conventional farming of 40 hectares, and a package of livelihood projects worth ?38 million. In exchange, SIDECO and Ayala will be allowed to develop around 334 hectares of land covered by CARP.

The agreement was signed by Ramos for FESIFFA; Edgardo Sarrosa for SIDECO; and Jose Emmanuel Jalandoni and Maria Corazon Dizon for Ayala. It states that once the Department of Agrarian Reform releases the conversion order for the 334 hectares, deeds of donation for the promised 30- and 40-hectare lands will be issued to the Sicogon farmers.

While DAR was quick to issue the conversion order on February 29, 2016, or around seven months after SIDECO’s application on July 16, 2015 — allowing the joint venture to commence development — the farmers have yet to receive what was promised to them.

Ramos said they entered into a compromise agreement. “When I signed it, government officials were pressuring me,” Ramos said, citing former Anti-Poverty Commissioner Joel Rocamora.

“The agreement was used to make it appear that we have withdrawn from CARP, that we were no longer interested in government’s land reform,” Ramos lamented.

DAR, for its part, cited the CFA when it approved the conversion order reclassifying the land from agricultural to commercial, stating that Ayala’s tourism project will generate more employment and business opportunities in the region. Subsequently, DAR also stated that in resolving the Sicogon conflict, “the interest and rights of the agrarian reform beneficiaries will be protected.”

While DAR sought in 2016 to put a moratorium on farm land conversion to ensure food security and to protect lands from being held by local and foreign businesses, the current policy is to fast-track land use conversion.

A 1919 decision by the Supreme Court, Aniceto Lacson v. The Government of the Philippine Islands, sheds some light on the disputed land’s history. In that case, the court decreed that as a precondition for a private landowner’s ownership of agricultural portions of Sicogon (excluding its forest zones), he must give the municipality “a portion of the said land sufficient for a public square of the barrio, another portion for the public cemetery of the same, and a lot sufficient for a school building as well as the municipal streets existing therein.” Such encumbrance still appears in the title now held by SIDECO.

In a 2016 integrated report, Ayala states that “the Sicogon Island project is supported by public, private and community organizations, and government bodies alike because of the potential economic benefits it will bring to the region.”

Ayala and SIDECO maintain that they did not violate their agreement to provide land and livelihood to the farmers. A document (titled “Comment to the Show Cause Order,” dated February 8, 2019) submitted to DAR, a copy of which was provided by FESIFFA, supports this stand. Among others, the document states that:

• Ayala and SIDECO have paid ?6 million pesos to FESIFFA as disturbance compensation, and is willing to deposit the remaining ?32 million pesos as soon as the proper recipients have been identified;?
• Ayala and SIDECO are willing to pay an additional ?11 million as separate disturbance compensation, pursuant to an agreement with FESIFFA;?
• It is FESIFFA that suddenly altered its position in the middle of meetings and consultations, and reverted to its demand for revocation;?
• Ayala and SIDECO has completed 50 resettlement units as of June 2018, and continues resettlement development; and?
• The delay in executing the deeds of donation are due to FESIFFA’s ever-changing demands and failure to comply with certain prerequisites.?

On March 6, 2019, DAR issued a cease and desist order (CDO), telling Ayala and SIDECO to stop construction activities in the island for the meantime.

In an official statement dated March 23, 2019 regarding the CDO, Ayala reiterates that the Sicogon Island and Tourism Estate (SITEC) “has faithfully and consistently complied with the terms of the CFA, and has, over the years, entertained numerous revisions on the resettlement plan as requested by the FESIFFA.”

It also states that 50 resettlement houses have been built on 30 out of the 70 hectares of land promised under the CFA, and that livelihood has been provided to the residents.

“SITEC has complied with the CDO and remains open to dialogue and compromise to ensure that a mutually beneficial resolution is arrived at for all stakeholders involved,” according to the statement.

FESIFFA, a federation comprised of 784 farmer-fisherfolk families, has been assisted by RIGHTS as the former exhausts its remedies. Among many other actions, FESIFFA has filed on Aug. 2017 for a revocation of the conversion order issued by DAR.

No action has been made on this petition yet — except for the issuance of a CDO — to Ramos’ and FESIFFA’s frustration. “We told them, why is it that when Ayala applied for conversion, they resolved it in less than six months. When we were the ones who filed for revocation 18 months ago, nearly two years already, they have not resolved it?”

“What does Ayala have that we do not have? Why is there partiality of justice?”

He recalled raising his voice during an earlier meeting with Undersecretary Luis Pañgulayan, even to the point of losing his calm. Other Sicogon residents, such as the vice president of FESIFFA, Amelia dela Cruz, cried as she recounted the brazen way they had been intimidated in their own homes.

Ramos carries an ID, indicating he is part of a group called Movers of Rody Duterte, stamped with the slogan “tapang at malasakit.” But he asked, “Where is the President’s concern for us? Does he care for the poor? If he cares, he should discipline his men, his alter ego here in DAR.”

Until DAR acts to resolve their petition for revocation, Ramos said they will continue to protest not only in DAR’s head office in Quezon City, but also in Sicogon.

“We will hold the government accountable. We will camp out here. We will do everything to end our problem in Sicogon,” he said.

Anna Bueno is a writer and lawyer. She is currently affiliated with the Foundation for Media Alternatives and Government Watch.