FIRST PERSON | Bike commuting on the 1st day of GCQ 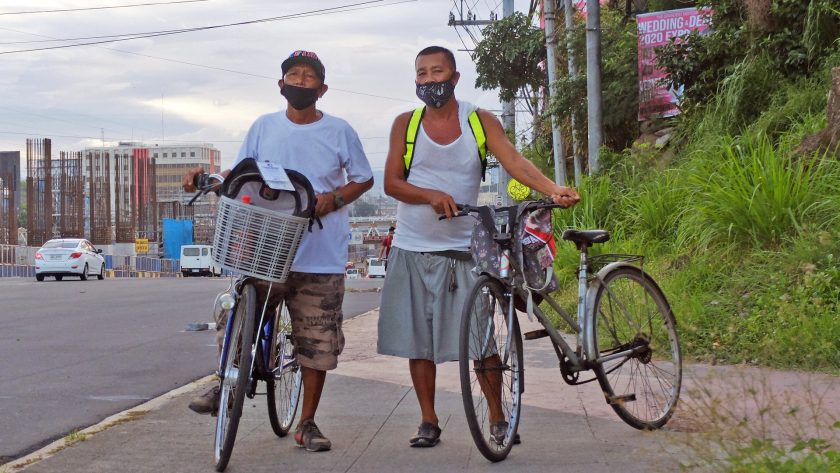 I went out this morning for my regular pandesal slash workout ride excited to see and perhaps even meet some of the new comrades in the bike commuting community. There was no doubt a remarkable surge in the number of bikers on the road and this sight gave me a sense of great hope and expectations on the future of bicycle use in this country. It was the kind of morning that feels like a new and happy beginning. My absolute feeling of joy, however, would somehow cave in after meeting a duo of first time bike commuters.

Mang Rolando and Mang Larry are neighbors in Montalban, Rizal. Both men work in Manila’s Port area as forklift operator and machinist, respectively. They left their homes at 5am so that they’ll be able to report early or on time for work at 8am today, on board their newly-acquired bicycles. At 6:05 am, they managed to reach the endpoint of this bicycle lane on Commonwealth Avenue where this photo was taken. I estimated that if they keep going at the same pace as they rode from their homes up to this point, they’ll be able arrive at their destination in an hour at least, completing the one-way 30-kilometer or so travel in more or less two hours.

I realized it is easier to see yourself, at least in my case, bike commuting when you are working in an air-conditioned office mostly doing mental labor. Riding a bike for maybe 5-10 kilometers then becomes a welcome form of exercise to make up for the lack of physical activity during those long hours seated at your desk. That you are not stuck in traffic and you lessen your carbon footprint are also encouraging. But this is a position of privilege many bike commuters do not have. Many of them are forced to take on this burden of additional labor before and after a day of performing backbreaking work in factories and other such places where you actually sweat it out to earn a living.

I know it is not a priority or perhaps not even something being imagined now, but I hope that the movement to build a more bike-friendly city will later consider taking on or become a part of the bigger struggle to make the city a more democratic space in terms of how people are able to comfortably navigate and inhabit it. Consider, for instance, the average biking distance to workplace in much-vaunted cycling capitals. In Denmark, it’s around 5 kilometers. Holland is just a little higher at 7 kilometers. I believe this suggests that a successful biking culture is built on the foundation of a democratic access to urban spaces, meaning affordable in-city housing and mass transport system that can hopefully work well in tandem with cycling. In other words, an ideal biking culture does not force people to the distant peripheries of the city and make them commute by bike to their workplaces like what has been practiced here. Our urban development has been characterized by a campaign of displacement and dispossession of the working class who make up a huge part if not the majority of the bike commuting population.

So yeah, let us fight for those damn bike lanes now. That’s the least we can do, specially for those who are left with no choice but to travel long distances using their bikes. But while at it, perhaps we can also start to imagine a cycling metropolis not only in terms of a network of bicycle lanes and other infrastructures but in how we can make urban spaces equally accessible for all.

The author is a biking enthusiast and aspiring farmer.

The post FIRST PERSON | Bike commuting on the 1st day of GCQ appeared first on Bulatlat.