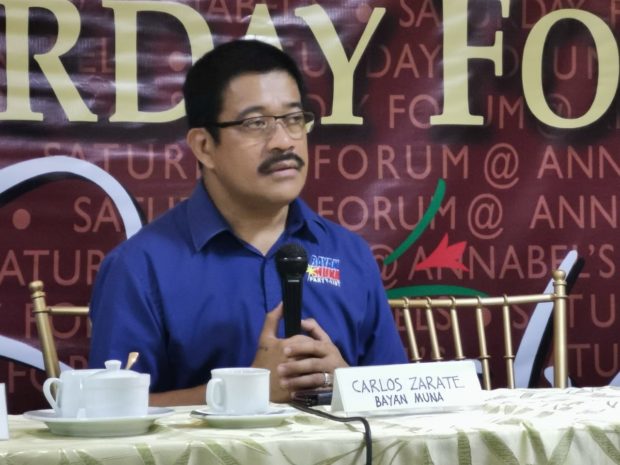 “This red-tagging is baseless and malicious,“ Chel Diokno, FLAG chair, said in a statement. “Such actions by the highest official of the land only subvert and hurt our already weak justice system.”

Diokno made the remark two days after the weekly pre-recorded briefing of Duterte during which he implied that Zarate supported the actions of the New People’s Army, the armed wing of the Communist Party of the Philippines (CPP).

“And at a time when government officials, judges, lawyers, and human rights advocates are being killed with impunity under Duterte’s rule, such red-tagging is irresponsible and dangerous — especially since such allegations are often the prelude to human rights violations, including harassment, unlawful arrest, torture, and threats to life,” Diokno added.

Zarate and other members of the left-leaning Makabyan bloc have constantly denied being members, much less officials, of the CPP.

He and other activists explained that they could condemn the rationale of the armed struggle as it would be tantamount to doing away with peace negotiations.

The Makabayan bloc has been dragged into discussions of CPP-NPA membership, especially after Jevilyn Cullamat, daughter of Bayan Muna Rep. Eufemia Cullamat, was killed in an encounter with the military.

After Duterte linked Zarate again to CPP-NPA, activists voice their support for Zarate and attested tohis contributions in the House of Representatives.

It was not the first time that Duterte criticized Zarate, who also hails from Davao City, his hometown. efore Duterte assumed office in 2016, there were talks that Zarate might be part of the Cabinet, as the choice of the National Democratic Front for the slots then reserved by the President for the left.

Duterte’s relationship with the left turned sour after a series of claims that NPA members ambushed the government’s security detail, which led to even more distrust between the two sides.

Diokno called on Filipinos to speak out against actions of the administration they did not agree with, saying they should not be intimidated by threats to stifle and demonize legitimate dissent.

“FLAG has seen in its decades of work: that it is when we are scared into silence that our rights are most under threat.  They will try to do this by making an example of those who remain outspoken against Duterte,” Diokno said.

“We call on all Filipinos to resist any attempt to intimidate us into silence. Our rights and freedoms hang in the balance,” he added.#