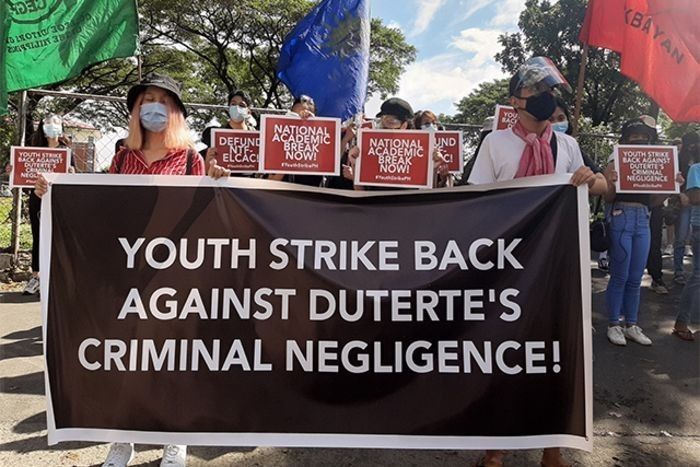 MANILA, Philippines — Ateneo de Manila students on Monday called for a nationwide academic break as part of its demands to hold government accountable for its response to the recent typhoons and the coronavirus pandemic that has hit the country, describing the situation as a result of the “criminal neglect of the State.”

“We do not strike as a way to exempt ourselves from academic life, for it is precisely to fight to return its value,” the strike manifesto read. “We invite our fellow youth nationwide. Together, in our collective action, we strike for not just our education, but a country that we can be proud of.”

Apart from an academic break, other demands include schools easing the workload for both students and faculty in the wake of the typhoons, as well as providing alternative learning resources for those far-flung areas without stable internet connection.

And as for the pandemic response, the Ateneo students called for an end to “military-centric” solutions to a health crisis, such as putting medical experts instead of military officials in charge of dealing with the situation at home.

Signatories, which had reached at least 500, vowed to begin the strike beginning Wednesday, November 25 followed by protests come November 30 if their demands are not met.

“We believe in the power of students,” the manifesto read. “It is because of the continuous government negligence in disaster relief, because of their wanton disregard for human life and dignity, and because of their disastrous education policies that we strike.”

They also called on the school administration to back their call, after the Jesuit-run university over the weekend disowned the recent protests as school-sanctioned.

Government had since rejected calls for a nationwide, let alone an academic break in Luzon that now finds itself under a state of calamity, with Palace spokesperson Harry Roque warning that signatories are only bound to fail.

The cost of damage from Typhoon Ulysses, the recent to hit the island, was pegged at P12.9 billion, Super Typhoon Rolly with P17.8 billion and Quinta with P4.2 billion. The storms that made landfall in just a short period of time, had left scores dead and millions displaced, with provinces submerged.

In the University of the Philippines, students and faculty have petitioned for an immediate end to the semester, citing the “unjust workload and mental burden on top of the anxieties that the pandemic has inflicted.”

“With only three weeks left to finish the semester, discounting the time needed to recover by those affected by the recent typhoons, the pressure to finish the remaining days of the semester has exacerbated to the point of inhumanity,” read the petition with over 270 faculty members signing.

Commission on Higher Education Chairman Prospero de Vera last week bucked the possibility of this, suggesting that universities instead extend the duration of the first term to early next year.

Recently, the student council of the University of Santo Tomas also joined a growing chorus for an academic break, as well as urging government to better its disaster response and for President Rodrigo Duterte to step down.

“The president’s persistent failures to fulfill his duties are more than a call for aid and assistance; it is a gross manifestation of his clear inability to lead the country,” said the council in a statement. “It is a call for him to resign, with what little dignity he has left.”

The threat of an academic strike has stirred a national conversation over the past week, especially with the matter apparently getting airtime in the president’s weekly public address, where he threatened to defund UP despite the initiative coming from Ateneo.

While Palace had since sought to clarify that Duterte may have mistaken this, lawmakers have shot down the possibility, saying state universities and colleges are “no-cut zones.” — Christian Deiparine