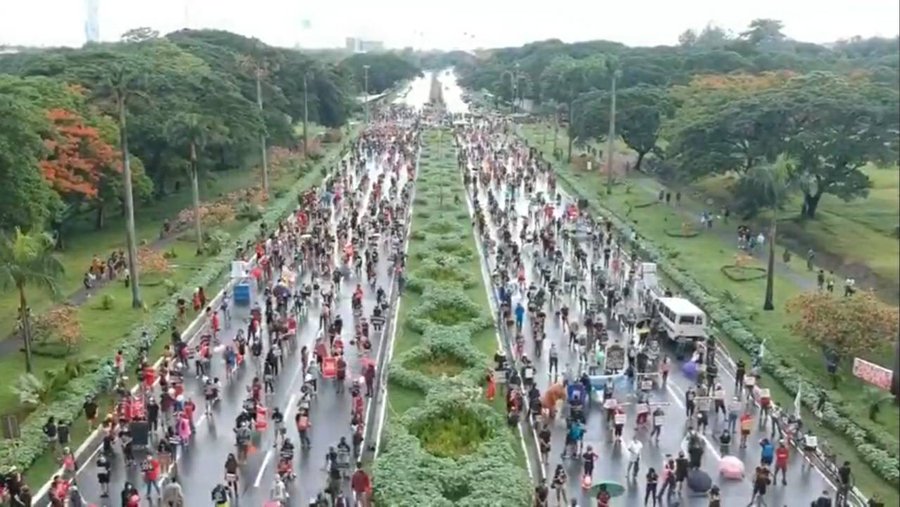 Despite warnings from Malacañang that joining protest is still prohibited, thousands braved the rains and joined the party-themed protest against the anti-terror bill.

MANILA — Party hats, balloons, cake, roses and a karaoke machine. These are not the typical things you see in a protest.

Thousands occupied the University Avenue at University of the Philippines Diliman. Some of the protesters wore party hats. Others brought roses and balloons. Like a real party, ice cream, bread and donuts were given free.

Unlike Sinas’ mananita, however, physical distancing was strictly observed. Some of the organizers distributed face masks, face shields, alcohol and sanitizer.

One of the highlights of the program was the speech of artist Mae Paner who impersonated Sinas. She told the crowd, “Kayo ang laging nasa isip ng presidente. Nanginginig na siyang pumirma sa anti-terror bill.” (The President thinks about you all the time. He is aching to sign the anti-terror bill)

Protesters replied with a resounding boo.

Lita Malundras, one of the ten volunteers arrested in Marikina on May 1, also spoke at the protest.

Malundras said they were feeding families of drivers and construction workers when they were arrested and detained. “Hindi kami kriminal. Hindi krimen ang pagpapakain sa komunidad na nagugutom.” (We are not criminals. It is not a crime to feed the hungry.)

When internet sensation Aling Marie, or Marie Dinglasan, went on stage, the young ones were all ears. “Di ko man kayo anak, kayo ay aking kakulay. Manahin ninyo ang mga tapang ng nakatatanda laban sa kasamaan. Kaya ang aking masasabi, ibagsak ang terror bill; ibasura at huwag hayaang maipasa,” she said.
(You may not be my children but we belong to the same race. I hope you inherit the courage of those who came before you, in the fight against evil. All I can say is, junk terror bill; junk it and don’t let it get enacted.)

Aling Marie, a store owner who became popular due to her response to die-hard Duterte supporters, delivered her iconic declaration at the protest, “Hindi ako dilaw. Hindi ako pula. Hindi rin ako puti. Kayumanggi ako.” (I am not yellow. I am not red. I am not white. I am brown)

In his speech, Bayan Muna Chairperson Neri Colmenares, said the anti-terror bill will be used against political dissenters and ordinary citizens airing their grievances to the government.

For first-time protester Rus, 21, participating in an offline protest is important when the people’s freedom is under threat.

Rus said he feels empowered being with fellow protesters, chanting and raising their fists. “Sa kabila ng pandemya, hindi pa rin tayo natakot na ipaglaban ang karapatan at kalayaan natin.” (Even during this time of pandemic, we are not afraid to fight for our rights and our freedom)