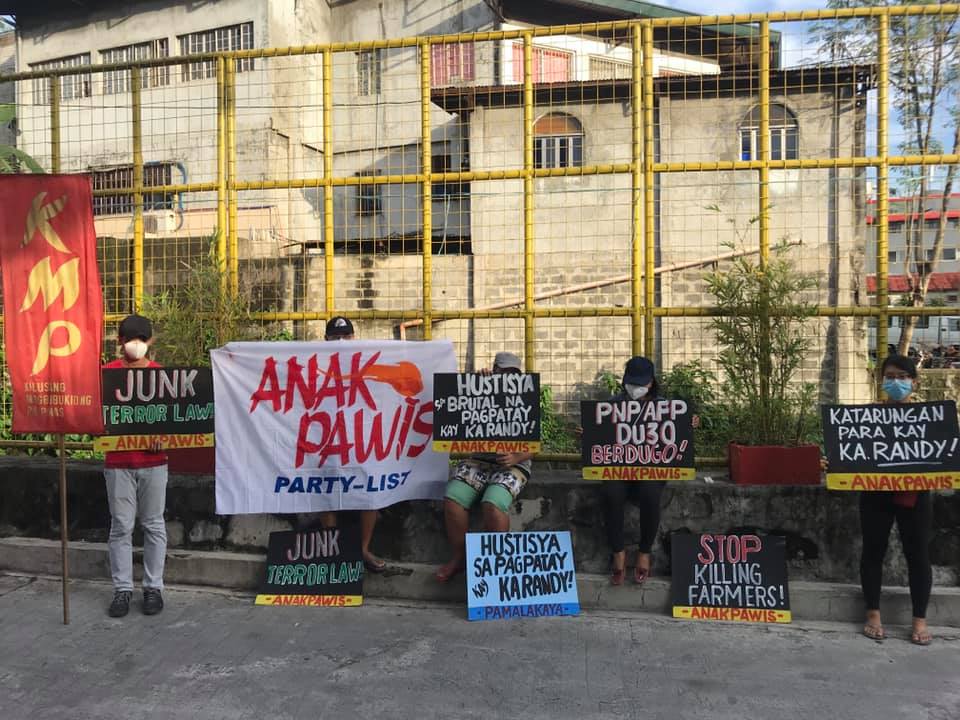 According to initial reports, Echanis, 72, was stabbed to death by still unknown assailants on early morning of Aug. 10 in a rented house in Novaliches, Quezon City. An unidentified neighbor was also killed in the incident.

His colleagues in the progressive movement demand justice for the killing of Echanis.

In a statement, Danilo Ramos, national chairperson of Kilusang Magbubukid ng Pilipinas (KMP) said they believe that the murder is “the handiwork of state forces and mercenaries of the Duterte government.”

Echanis was chairperson of Anakpawis Partylist and deputy secretary general of the KMP.

For 40 years, Ramos said Echanis had advocated for substantive reforms for the peasantry and in achieving lasting peace. “Only rabid hacienderos, land grabbers, and militarist peace spoilers desire his death,” Ramos said.

“We hold accountable the Duterte regime which has persistently proclaimed and acted against genuine land reform and a just peace,” he added.

In his statement, NDFP Chief Political Consultant Jose Maria Sison blamed Interior Secretary Eduardo Año who, he said, “has been boasting to his staff and other people that he has mapped out the locations of all social activists through the local governments and neighborhoods and that he can wipe them out the social activists anytime.”

“This boasting of Año is taken seriously by all the social activists that he threatens to kill,” said Sison.

Sison said that Echanis as well as the other negotiators, consultants and staff of the GRP and NDFP in the peace negotiations, was supposedly protected by the safety and immunity provisions of the Joint Agreement on Safety and Immunity Guarantee (JASIG), even after peace negotiations was terminated unilaterally by Duterte.

“Duterte and his gang of butchers are truly monstrous for murdering the unarmed Randall and his neighbor,” he said.

In a separate statement, Karapatan Chairperson Elisa Tita Lubi said they are enraged beyond measure. “The despicable and shameless killing of Randy Echanis — in the middle of a pandemic that this government fails to stem — only shows that the dark and murderous forces of this militarist regime will not cease in their deranged rampage of killings and other gross human rights violations,” she said.

Bayan Muna Rep. Carlos Zarate meanwhile said the killing of Echanis is a “cowardly act and is highly condemnable.”

“It shows how low anti-democratic forces can go if only to silence dissent. That an old man would be murdered just for fighting for the Filipino peasant’ right to land and other oppressed sectors in our society is clearly emblematic of the state of impunity and tyranny in our country today,” Zarate said in a statement.

Zenaida Soriano, national chairperson of National Federation of Peasant Women or Amihan said Echanis’s “service to the peasant movement and the promotion of genuine agrarian reform in the country is exceptional.”

She said that Echanis was a key actor in the crafting the Genuine Agrarian Reform Bill or GARB, the flagship bill of Anakpawis Party-list, since it was first filed in the House of Representatives in 2007.

He also contributed to the formation of the Genuine Small Coconut Farmers’ Fund or the recovery of billions of coco levy funds, Free Irrigation Bill and Rice Industry Development Act or RIDA and other measures for the benefit of the peasant and working masses.

Echanis was also been part of the peace negotiations since 2002. He served as a consultant for the forging of a Comprehensive Agreement on Socio-Economic Reforms particularly on Agrarian Reform and Rural Development.

Dedicating life in the service of the people

Sison said Echanis “had long dedicated himself to his social advocacy and had made tremendous sacrifices for many decades.”

Ramos also described Echanis as selfless and resolute. “Ka Randy continued in working for genuine land reform and a just peace despite being detained three times under the presidencies of Ferdinand Marcos, Cory Aquino, and Gloria Arroyo. He lived a simple life and amassed nothing but contributions to the people’s struggles,” he added.

“After Randy, Fidel, and now Randall, too many, too soon and too tragic,” said National Union of Peoples’ Lawyers national president and National Democratic Front of the Philippines Legal Consultant Edre Olalia said in a statement.

Olalia remembered Echanis as someone who is simple but sharp in his analysis.

“I fondly recall how ‘brothers’ Fidel and Randall engaged in unceasing juvenile banter and comradely taunts during idle moments or breaks in intense negotiations and serious consultations,” Olalia said.

“The evil forces snatched you away from all of us in such brutal, treacherous and heartless fashion. What creatures can ever imaginably do that to a quiet, gentle, unassuming man of peace in his sunset years? There will be justice, RE,” he added.

Sison said that the killing of Echanis and his neighbor has “aroused the indignation and just wrath of the peasant masses and the entire Filipino people.”

“All social activists have no choice but to intensify in every necessary way their struggle against the tyrant, traitor, butcher and plunderer Duterte,” Sison added. (Bulatlat.com)