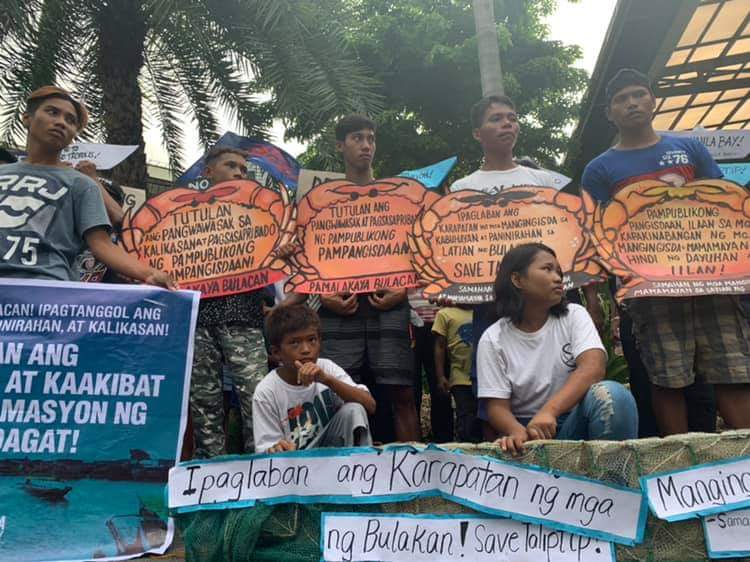 BULAKAN, BULACAN — Immediately following the back-to-back protests of Bulacan fisherfolk and residents in the headquarters of Department of Environment and Natural Resources (DENR) and San Miguel Corporation (SMC) last July 17, the food and beverage giant called for support to its Aerotropolis project.

According to the local conglomerate, the New Manila International Airport (NMIA) would contribute in solving the country’s transportation woes and bring “unprecedented level of growth” to Bulacan’s local economy with a P735-billion investment.

“With a major international airport at their doorstep, fisherfolk, micro entrepreneurs, and local businesses will have a huge, ready market for their products, and even a means to ship them to other provinces or export them,” SMC said in its statement.

While not against development, Virgilio del Rosario, spokesperson of Pamalakaya – Bulacan, said that “SMC’s dream is our nightmare.”

“We, fisherfolks, are not against development when it strengthens our livelihood and dignity. We do not want airplanes flying above us and skycrappers talling over us when we are caught up in displacement and precariousness in livelihood,” del Rosario said.

“What ‘huge, ready market’ for the fisherfolk communities will there be if the very source of the people’s livelihoods among the mangroves and fishing grounds will be directly destroyed?,” the alliance said.

An unsolicited proposal, the Aerotropolis project follows the Manila Bay Coastal Strategies which is a part of the Duterte administration’s Build, Build, Build program.

Bayan – Bulacan claimed that once the construction commenced, Ramon Ang’s SMC would profit off by tapping its other businesses, including Eagle Cement, Petron and Bulacan Bulk Water. The group said it could connect it with another unsolicited project, Manila Integrated Flood Control and Coastal Defense Expressway Project – one of the administration’s 64 big ticket infrastructure projects.

“Definitely, the airport city project is a part of the government’s Destruct-Destruct-Destruct scheme that primarily caters to business interests and conveniently leaves out genuine development prospects for the people,” Bayan – Bulacan said.