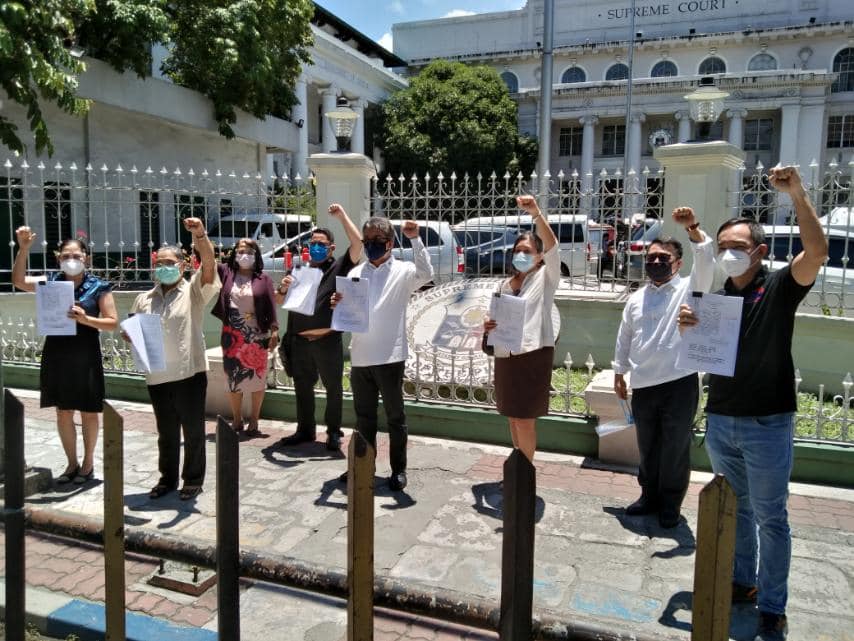 “Given the vast and greater powers bestowed under the law, it will have a wide-ranging effects of violating existing constitutionally-guaranteed rights of our people, thus, the issuance of a ?shield against injustice, a temporary restraining order, against its enforcement, effective until the finality of the judgment, is fair and prudent under the circumstances.”

MANILA – The Makabayan bloc filed a petition against the Anti-Terrorism Act of 2020 at the Supreme Court on Monday, July 6.

The progressive lawmakers are asking the Supreme Court to declare unconstitutional and nullify Republic Act 11479 or the “Anti-Terrorism Act of 2020.”

The Makabayan bloc argues that several sections of the law clearly violates the rights protected by the Constitution such as freedom of speech.

Salient points of the petition include the following:

The detention without warrant of arrest under Section 29 and Section 34 violates constitutional right to bail.

The Makabayan bloc maintained that “given the vast and greater powers bestowed under the law, it will have a wide-ranging effects of violating existing constitutionally-guaranteed rights of our people, thus, the issuance of a ?shield against injustice, a temporary restraining order, against its enforcement, effective until the finality of the judgment, is fair and prudent under the circumstances.”

Read: 4 reasons why anti-terror bill should be junked

The petition questions the definition of terrorism and terrorist acts saying that the “definition is so broadly framed as to sweep any speech and any act which would otherwise be protected under Section 4 of the Bill of Rights.”

The Makabayan bloc noted that the five “terrorist acts” under the present law, “replace the predicate crime element in the old Human Security Act of 2007, and that the required element that the said acts result in widespread and extraordinary fear is completely erased.”

The Makabayan also asserts Section 29 of the law is also against the Constitution.

Under Section 29, arrest without warrant of arrest is allowed and a suspected “terrorist” can be detained for 14 to 24 days. The law enforcement authorities only needs a written authorization from the Anti-Terrorism Council (ATC).

The Makabayan said this violates the principle of separation of powers enshrined in the Constitution which states that “only a judge can issue arrest warrants, and that arrest warrants shall only be issued upon judicial determination of probable cause.”

It also added that the ATC which is composed Cabinet members plus the head of the Anti-Money Laundering Council (AMLC) are all alter egos of the President.

“This council, is by definition and purpose, an administrative body statutorily created. The ATC is not part of the judiciary,” the petition read.

“The determination of probable cause for purposes of issuing a warrant of arrest and the issuance of arrest order itself are exclusively a judicial function as the constitution absolutely prohibits a non-judicial entity to do such,” it added.

The Makabayan bloc said while it recognizes the need address terrorism as well as other serious crimes against the citizens, addressing these problems should never erode the peoples’ basic rights in the pursuit of national security.

“It must never be done through unconstitutional means, otherwise, the enforcers are susceptible to turn into terrorists themselves, terrorizing the members of society by depriving them of the mantle of protection accorded by Constitution. A draconian law such as the Anti-Terrorism Act of 2020 has no place in a democratic society, and must therefore be struck down,” the petition read.

Read: Why the anti-terror bill is sanctioned state terrorism

In the petition, the Makabayan bloc highlighted Section 4, Article III of the 1987 Constitution which protects the freedom of speech, of expression and of the press as well as the right of the people to assembly and petition the government for redress of grievances.

Article III of the 1987 Constitution which protects the freedom of speech, of expression and of the press as well as the right of the people to assembly and petition the government for redress of grievances.

“A government with a genuine respect for these liberties allows, and even encourages, the articulation of the unorthodox view, though it be hostile to, or derided by others; or though such view ?induces a condition of unrest, creates dissatisfaction with conditions as they are, or even stirs people to anger. Its scope is so broad that it extends protection to nearly all forms of communication,” the petition read.

They lamented that even before the passage of the law, they have been linked to the Communist Party of the Philippines and New People’s Army which state security forces label as “terrorist groups.”

“We are not terrorists, and neither are our party-list groups. But notwithstanding almost two decades of being part of the House of Representatives in this Republic, state security forces have been treating us and our officers and members as ?enemies of the state merely because we dare call for the investigation of their human rights violations, overpriced contracts in their budget, and corruption in issues such as ghost soldiers or the ?pabaon and ?pasalubong of their generals,” they said.

“Worse, several of our leaders and members have been killed while others are being deprived of liberty on false charges,” the petitioners said.

This is the fourth petition against the law since President Duterte signed RA 11479 on July 3.

The first petition was filed by the De La Salle brothers led by Brother Armin Luistro and Atty. Howard Calleja of the Calleja Law Firm. Albay Rep. Edcel Lagman filed the second petition, while the third was filed by the group of Atty. Mel Sta. Maria, dean of the Far Eastern University College of Law.