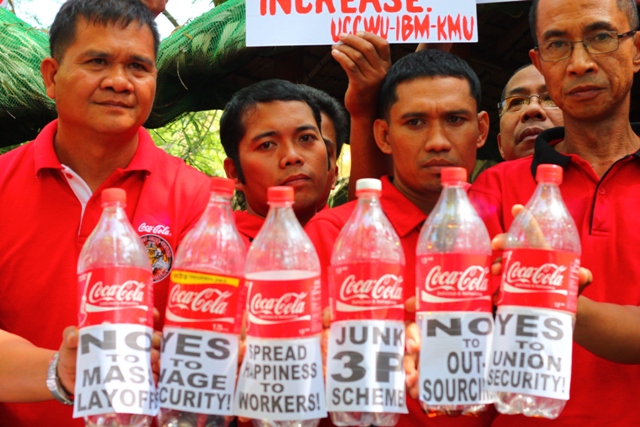 Defend Coca-Cola Workers described the incident as a “clear case of harassment and anti-union practice”, calling it “shameful and infuriating” that Coca-Cola would “collude with the AFP and PNP to take advantage of the hunger, fear and struggle faced by many due to the COVID-19 pandemic.”

STA. ROSA, Laguna – Nine contractual workers from the Coca-Cola Femsa Plant in Santa Rosa were brought to Camp Macario Sakay in Los Baños, Laguna after finishing a 12-hour shift, where they were accused of being “members of the revolutionary New People’s Army,” April 23.

This would not be the first time Coca-Cola workers would experience harassment during the ongoing lockdown brought about by the COVID-19 pandemic. Between April 1 and 2, armed police officers visited the houses of Coca-Cola unionists and insisted they “surrender” as members of the NPA.

One worker, who asked for anonymity , stated that he and 10 others were asked by Jury Montellana, chairperson of Liga ng Manggagawa para sa Regular na Hanapbuhay sa Planta ng Coca-Cola (LIGA), to go to Camp Macario Sakay, but only nine of them decided to go.

Inside Camp Macario Sakay, the nine workers were interrogated in batches of three, and each batch was asked different questions. Some common questions were about who their instructors were, what courses they took, and if they “took an oath.”

The nine workers were also promised regularization in exchange for not participating in union activities.

The nine workers also identified Rey Austria Medellin, a labor leader inside the Coca-Cola union, to be collaborating with the Philippine National Police.

A statement by labor group Defend Coca-Cola Workers identified Medellin as a known police asset whose job is to “point out who the leaders are and, alongside the PNP, go to their houses to intimidate at force to surrender as members of the NPA.”

The Revolutionary Council of Trade Unions – Southern Tagalog (RCTU-ST) condemned Medellin, calling him an “example of an opportunist leader who, after benefitting from the union’s struggle, is ready to sell out the union’s and his class’ interests in exchange for minuscule rewards from capitalists and fascists.”

According to RCTU-ST, Medellin was a high ranking labor leader, and was in fact a victim of harassment from a certain Tom Garcia due to his involvement in the Coca-Cola union. Medellin was also plagued by financial trouble and struggled to raise his 10 children.

The Coca-Cola union was set to report the harassment faced by Medellin to the United Nations’ International Labour Organization, while also preparing how to assist Medellin in his financial instability.

However, RCTU-ST Spokesperson Fortunato Magtanggol said Medellin “exposed himself as collaborating with the capitalists of Coke and the military” as early as February, when he expressed his plan to dismantle the union with the aid of Rene Escuadra, head of Coca-Cola’s security.

Last March 29, Medellin was identified by RCTU-ST as one of the “surrenderees” paraded by the Armed Forces of the Philippines in a “fake ceremony” on 40 NPA members at Camp Vicente Lim, presenting himself under the alias Rebo.

Medellin was also identified to have accompanied the police in harassing Coca-Cola workers in their homes, April 1 and 2.

Defend Coca-Cola Workers described the incident as a “clear case of harassment and anti-union practice”, calling it “shameful and infuriating” that Coca-Cola would “collude with the AFP and PNP to take advantage of the hunger, fear and struggle faced by many due to the COVID-19 pandemic.”

Defend Coca-Cola Workers also stated that the “capitalists of Coca-Cola clearly want to break the union and take back the victories it has gained by conflating unionism with revolutionary movements and the NPA.”

About 430 Coca-Cola workers went on strike in 2013, which resulted in regularization and other benefits. edellin was one of the workers who were regularized following the three-day strike. Due to continuing concerns over contractualization and union-busting, 140 LIGA members staged a strike five years later in March 2018, which also resulted in a victory for the workers.