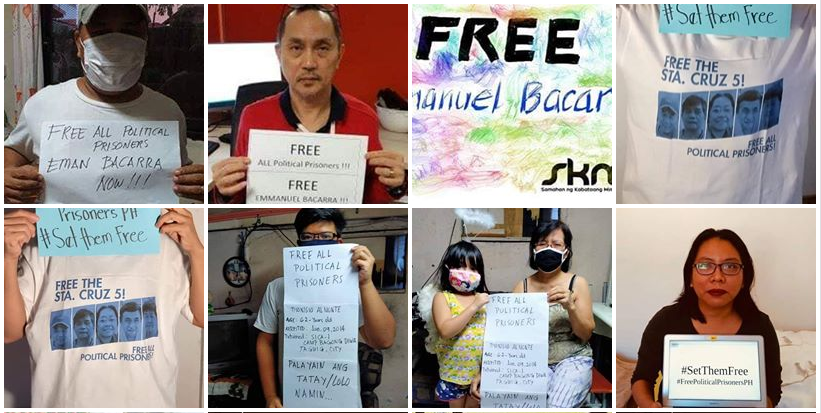 “The humane treatment of persons under detention and their release from prison in the midst of a raging pandemic are in consonance with international laws, among them the International Covenant on Civil and Political Rights and the Convention against Torture and Other Cruel, Inhuman or Degrading Treatment or Punishment, to which the Philippines is a state party.”

MANILA – Lawyers of political prisoners scored the Office of Solicitor General’s “callous disregard for human dignity” for opposing an urgent petition for temporary release of sick and elderly inmates.

In their reply submitted to the Supreme Court, April 27, petitioners, through their counsels from the Public Interest Law Center (PILC) and National Union of Peoples’ Lawyers (NUPL), reiterated that 17 out of the 22 petitioners are senior citizens with underlying illnesses while the remaining four have other ailments, making them highly vulnerable to contracting coronavirus disease (COVID-19).

“Their temporary release from prisons during these extraordinary circumstances is in line with the aim of preempting the danger posed by COVID on the at-risk groups,” they said in their reply to the OSG comment.

At present, 234 inmates and staff under the custody of Bureau of Jail Management and Penology (BJMP) are positive with COVID-19. As of April 25, one Bilibid inmate has died of the coronavirus disease while 21 others from the Correctional Institute of Women (CIW), nine Quezon City Jail prisoners, and more than 200 Cebu City Jail inmates have tested positive.

“Given the severe overcrowding and sub-human conditions in these jails, it is only a matter of time before a contagion breaks loose within its confines and afflicts detainees and jail personnel alike,” the petitioners said in their reply.

Congestion rate at BJMP facilities in Metro Manila range from 115 percent to as high as 800 percent. New Bilibid Prison has a congestion rate of 353 percent while Correctional Institute for Women registered a 240-percent congestion rate as of January 2020.

While the OSG, in its comment filed April 24, recognized that physical distancing is impossible, such ‘reason,’ according to the OSG, “does not provide legal justification to give the petitioners unwarranted favor of being release (sic) from their detention cells while all other prisoners remain languishing in jail.”

The petitioners clarified they are not asking for special treatment, and maintained that the petition also prays for the release of other prisoners similarly situated in terms of age, sickness and other vulnerabilities.

“The humane treatment of persons under detention and their release from prison in the midst of a raging pandemic are in consonance with international laws, among them the International Covenant on Civil and Political Rights and the Convention against Torture and Other Cruel, Inhuman or Degrading Treatment or Punishment, to which the Philippines is a state party,” the petitioners said in their reply.

‘Health and safety measures not enough’

The petitioners also debunked the OSG’s statement that all penal facilities in the country are equipped in dealing with COVID-19.

The OSG cited the setting up of isolation rooms, and the availability of doctors and nurses 24-hours a day to monitor persons deprived of liberty (PDL) as some of the health and safety measures undertaken by BJMP and Bureau of Corrections (BuCor).

Such measures are not commensurate to the gravity of COVID-19 pandemic, according to the petitioners. For instance, the isolation capacity of detention facilities is very small relative to the population of inmates.

The ratio of 14 BJMP health practitioners to PDLs, they added, is far from reassuring. BJMP National Capital Region has a total of 30,959 PDLs while BJMP National has 120,843 PDLs.

The petitioners lamented that the OSG did not mention anything about timely access to test kits, which, “appears key in the success of the scientific containment of the virus.” They cited that two inmates died on the same day their test results came out while one died without getting tested.

The respondents did not propose any decongestion measure.

The petitioners cited the recommendation of World Health Organization (WHO) Europe in addressing prison overcrowding, such as prioritizing the conditional release of older persons, ill people, and others with specific risks related to COVID 19.

They argued that the releases of prisoners in other countries were all based on the same humanitarian grounds aimed at preempting the further spread of the virus in jails.

The OSG claimed that Enrile vs. Sandiganbayan is inapplicable in the said petition. In its comment, the OSG said two conditions: 1) that the detainee will not be a flight risk or danger to the community; and 2) that there exists a special, humanitarian and compelling circumstances, are absent in the current petition filed before the Supreme Court.

Former Sen. Juan Ponce Enrile was allowed to post bail in August 2015 when he was detained for 15 counts of graft over the multibillion-peso pork barrel scam.

The petitioners maintained that they are not flight risks as their medical and physical conditions require constant and continuous monitoring and medication.

In a statement, human rights alliance Karapatan said that the OSG’s argument is “trademark of the Duterte administration’s convoluted concept of governance and justice.”

“When [Solicitor General Jose] Calida and the OSG asserted in their comment that the SC’s bail remedy for Juan Ponce Enrile, chief implementer of Marcos’s martial law, is not applicable to the elderly and sick respondents in this case, they reiterated the basic concept of injustice of this administration – that it is partial to its allies, especially for the moneyed and powerful among them, while sick and ailing detained activists cannot be accorded the same. Such double standard of justice is pronounced in the whole text of the OSG’s comment…” said Karapatan Deputy Secretary General Roneo Clamor.

In their reply to the OSG comment, lawyers said that National Democratic Front of the Philippines (NDFP) peace consultants Vicente Ladlad, Adelberto Silva and Renante Gamara came back to the Philippines from the Netherlands despite President Duterte‘s order to arrest the NDFP consultants. Duterte publicly issued the said order after the cancellation of the fifth round of talks between the Government and the NDFP in May 2017.

NDFP Secretariat staff Alexander Birondo and Winona Birondo also returned to the Philippines despite the threat of arrest.

Lawyers said the petitioners will abide by any condition imposed by the high court in the event that they are temporarily released whether in the form of bail or recognizance or whatever non-custodial measure the Honorable Court deems fit during the existence of a public health emergency.

Lawyers of the petitioners took offense at the OSG’s attempt to vilify their clients.

How the legal system is used to attack political dissenters

“The respondents try to depict the petitioners as terrorists and soulless elements, who, having committed grievous crimes against the people, do not deserve be treated with humanitarian consideration,” they said. “… [t]he nature of their cases and the circumstances of their arrests will show that they are not threats to security and to society but are rather victims of political persecution. They are prisoners of conscience.”

The petition stemmed from the call of United Nations High Commissioner for Human Rights Michelle Bachelet to release prisoners who are vulnerable to contracting COVID-19.