The Heroism of Information: Alternative Media and The Revival of Investigative Journalism 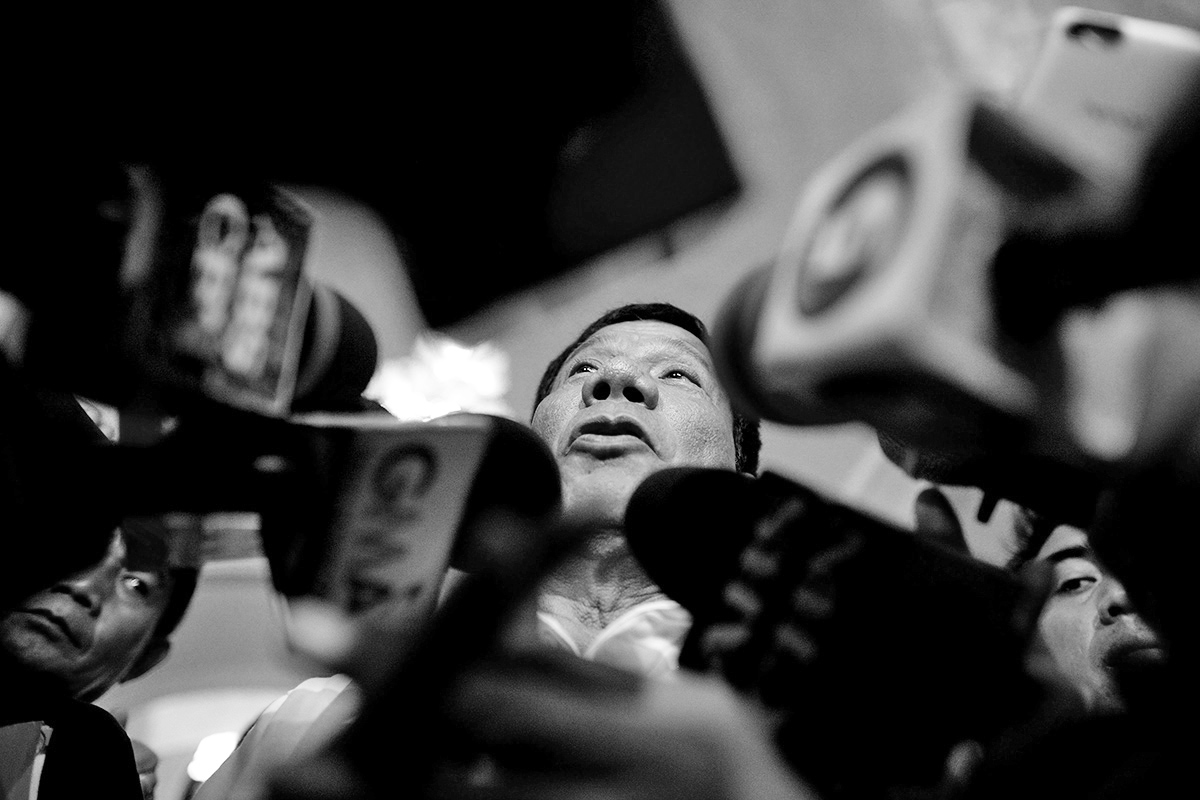 The impulse of the Duterte administration is to repudiate any interference from any media/news outlet that is critical of the state and to cast its journalists as pariahs. The “extra” judicial intimidation suffered by Rappler and other news organs and the mindless labeling of activists and journalists as “terrorists” and the phenomenon of Fake News are an astounding blow against journalism and human rights all the same.

Perhaps in no other country than in the Philippines has disinformation been institutionalized, proliferated unscrupulously and unashamedly by those who hold office (represented by the exasperating nonsense of Mocha Uson and the gang of cynics: Roque, Alvarez, Calida, Panelo, Pacquiao, Cayetano and the list goes on, add to this the sordid propagandism of the military) and those fanatic supporters, paid or voluntary, who proliferate their practical jokes and grotesque anecdotes of their dear leader in social media sites. We are witnessing the evolution of the free press into circus press, and the danger is already there. The so-called “architects of disinformation” are beginning to replace our investigative journalists and the critical information that’s supposed to reach the public is swept aside by the tyranny of Fake News.

What happened to investigative journalism?

Investigative journalism– what was once a noble and laborious practice of intense researching into facts and events– has been marginalized by TV reporting whose news values are determined by viewership ratings. Corporate media have no interest in the quality of information they are disseminating; quality and content are subordinated to obtaining high viewership rating rather than to any sense of public responsibility and of commitment to truth. A successful viewership rating implies the standards of entertainment. News delivered as entertainment. Examine the treatment of the government’s war on drugs by major news channels–there are sensational scenes of drug raids, brutal mages of dead bodies, degrading snaps of grieving relatives, and the glorifying display of police virility– constitute little more than a drama series. Everything is contrived for public spectacle. News that consolidates the ideology of consumerism: news that sells, that is unoffending and pleasing to the viewers, that gathers rating and profits for the company. In place of journalists we have TV presenters and hack writers; in place of serious analysis we have aggressive banalities. Behind all this pretension to journalistic objectivity is the invisible scale of human tragedy.

And the “report” has been stripped and robbed of their facts and substance in favor of entertainment value, and the viewers, noted the great journalist John Pilger, become “merely passive consumers of the trifling, the puerile, the trashy and the pornographic. They are never a political force; for the only ‘politics’ permitted is spurious indignation about false demons and worship of the consumer gods and their priests. [The poor] are of no account, unless they serve as victims. Young people are morons and drug dealers. The solidarity of working people seeking their rights is [unmarketable].” Where serious issues are at stake, TV news reporting never go beyond the quality of sports entertainment commentary.

“But where the lives of men and women are concerned, must we be treated by
television and agency reporters to a commentary on the level of a football match?”

The phenomenon of Fake News has also contributed immensely to the marginalization of investigative journalism. The overdose of Fake News that contaminate the cyberspace where it thrives has isolated the newspaper traditionand the short attention span of the public which has worsened since the onset and spread of the internet has been the impetus for the dissemination of Fake News.

Investigative journalism relies on exposure to hard facts, painstaking analysis of events, the need of factual checking and on the ground engagement which meant a considerable amount of time to run an article into a certain issue. On the other hand, Fake News is produced in a flash (or in TV idiom, breaking news); it is about factual distortions masquerading as news; it appears persuasive because a veneer of mindless generalizations, sensational assertions, and sentimental and populist claims overlay its content; it uses cheap tactics– grotesque juxtaposition of images, trolling, inappropriate appropriation of photographs, reference to imaginary sources, deliberate abuse of history, verbal mudslinging, claim to authoritativeness–-to instantly capture the attention of viewers. Unlike the scope and breadth of a serious investigative report, Fake News is stultifyingly brief likesound-bites, because like any journalistic fad that uses shock as a gimmick it directly appeals to the cliches of emotions instead of to the insight of reason.

Fake News in the Philippines has its own peculiarities which make it quite easy to pin down: it sounds like a rant, it is pretentious as it is bitchy, it is half-reported, it is falsely moralistic and malicious, it is audaciously assertive and on the defensive at the same time. Fake News is the antithesis of investigative report.

A Word on Investigative Journalism in The Third World

“Unhappy is the land that needs a hero.” – Bertolt Brecht, Galileo

In no other part of the world is the cost so high for investigative journalists than in the third world countries like the Philippines where political murder and impunity are the laws of the unhappy land.

That investigative journalists write with their blood is not mere hyperbole. Reporters Without Borders (RSF) noted that the “Philippines is the world’s second most dangerous country for media personnel (just behind Iraq), with a total of 146 journalists killed from 1990 to 2015, according to a survey by the International Federation of Journalists.”

Under the Duterte administration, six journalists have been killed, according to the Center for Media Freedom and Responsibility and the National Union of Journalists in the Philippines. Their names are worth remembering:

Against the formidable violence of power the work of investigative journalists (and writers as well) is a most generous act of service to the community. A work that is, although materially unrewarding, wrote the Italian historian Roberto Pizzi, “inspired by love and guided by conscience which has no limits.” To tell the truth, to cast into light the abuses and injustices of power which otherwise would have been kept in silence, to challenge the assumptions of those who wield power and to hold them to account, to give voice to the wretched of the earth – this is what characterizes genuine investigative journalism.

In the age of Fake News and celebrity culture, investigative journalists are our invisible heroes.

The Spell of Objectivity

Journalism is said to be justified and sustained by the principle of objectivity whose maxim is: there is always two sides to every story. The two sides of the story must be well proportioned to account for objectivity, otherwise disproportion invites the accusation of bias or prejudice or overt subjectivity. The claim to this so-called objectivity has powerfully weakened journalism’s illuminating and combative capacity to take sides; it has sapped the force of journalistic language to confront power and to name the guilty. It has become characteristic of mainstream media to practice soft reportage in the guise of exercising objectivity that no offenders are named and crimes deodorized. Perhaps the massive decline of newsreading could be attributed to this: reports that are soft, unaffecting, ineffective, misleading, boring, and cowardly. Journalists have lost their “moral compass,”
their “ability to tell the truth.”

The courageous journalist Robert Fisk has eloquently illustrated this journalistic debasement in mainstream media’s treatment of wars, taking the Israel-Palestine conflict as example:

“Editors around the world are requesting their journalists to be ever softer, ever more mealy-mouthed in their reporting of any incident which might upset Israel… Wars have always produced their verbal trickeries, their antiseptic phrases and hygienic metaphors, from ‘collateral damage’ to ‘degrading the enemy’. The Palestinian-Israeli conflict has produced a unique crop. The Israeli siege of a city has become a ‘closure’, the legal border between Israel and the occupied territories has become the ‘seam line’, collaborators for the Israelis are ‘co-operators’, Israeli occupied land has become ‘disputed’, Jewish settlements built illegally on Arab land have become ‘neighborhoods’… Oddest of all is Israel’s creepy expression for its own extrajudicial murders: ‘targeted killings’.”

Is not the corporate media in the Philippines similar in this regard in its coverage of the government’s war on drugs and the martial law situation in Mindanao? In his novel, My Brother, My Executioner (1973), F. Sionil Jose eloquently captures the way big business interfere in journalistic ethics. Luis Asperri, a well-intentioned young writer is sacked for having written an article for a magazine owned by the media magnate Dantes (the Filipino version of Rupert Murdoch,) about the massacre of peasants in his hometown by his father’s para-military group with the explicit collaboration of the state military.

“There was no massacre–just an encounter,” said the media baron, Dantes.

“All the big papers are owned by powerful Filipinos.”

Corporate media’s ridiculous claim to objectivity is merely a camouflage for ideological and political use of journalism.

There is in mainstream media, George Orwell observed, “a sort of all pervading orthodoxy, a general tacit agreement not to discuss large and uncomfortable facts.” And if certain information is delivered in public, it behooves the latter to call the former into question by virtue of the fact that the media is owned by powerful individuals.

This is the raison d’être of alternative media: “to discuss large and uncomfortable facts.” The relevant information that should reach the public, as we have already discussed, cannot come from the nihilism of corporate media otherwise it would go bankrupt. This task belongs to alternative media which revives and preserves the noble ethos of investigative journalism. The collaborative efforts of concerned citizens, journalists, writers, artists, activists and grassroots organizations, amid threats of censorship and intimidation, stand as a crucial lever against the entertainment-saturated mainstream media and the bombardment of Fake News.

Information which is becoming more and more privatized and distorted and censored by search engines and social media sites owned by powerful corporations– as exposed by journalist and activist Glenn Greenwald and whistleblowers Julian Assange and Edward Snowden –alternative media is a hopeful attempt at democratization of information.

A healthy functioning democracy is predicated on an informed public and the quality of information it receives. Alternative media’s trenchant and daring work of investigative journalism–if it is to be faithful to the imperatives of truth and justice, is inherently subversive; and subversiveness coupled with compassion is the one quality which saves democracy from deterioration.

Carlo Rey Lacsamana is a Filipino, born and raised in Manila, Philippines. Since 2005, he has been living and working in the Tuscan town of Lucca, Italy.

The post The Heroism of Information: Alternative Media and The Revival of Investigative Journalism appeared first on Manila Today.