On March 26, WHO issued a statement urging countries to not waste time in its efforts against the contagion and gave a list of six actions every country should take immediately. Unfortunately, the Philippine government is found wanting in its efforts to stop the spread of COVID-19.

“Obey the police and the military; acts of public disturbance can get you arrested.”

These words quite sum up President Rodrigo Duterte’s March 16 press conference, placing the entire Luzon under lockdown in an effort to mitigate the spread of the coronavirus disease 2019 (COVID-19).

As of this writing, there are already 3,094 cases, 144 fatalities, and 57 recoveries of COVID-19 in the Philippines. The cases skyrocketed in the recent days following the growing demand to conduct more tests.

In the late night of March 23, Congress and Senate convened to grant Duterte emergency powers to address the public health crisis. Curiously dubbed as “Bayanihan to Heal as One Act”, the law entitles Duterte to tap P275 billion unused public funds despite lack of breakdown. It also entailed the formation of National Action Plan (NAP), chaired mostly by military men from Department of National Defense (DND) and Department of Interior and Local Government (DILG)*, to “reinforce the efforts of the Department of Health (DOH) in containing COVID-19”.

This militaristic approach to the pandemic is no surprise. Known to have long been aiming to eradicate criminality since his mayoralty in Davao, Duterte championed the 2016 elections for donning strongman politics: an authoritarian leader ready to exterminate crime perpetrators. Leaving 29,000 deaths—including those of what was conveniently tagged as “collateral damage”—from the so-called “war on drugs,” Duterte’s leadership purged at all cost like a true Machiavellian. Amidst the challenge of COVID-19, he proves to know no other approach. The police and the military forces, after carrying out state killings, are now asked to enforce strict community quarantine measures, while the government is yet to lay down concrete healthcare and social security plans. They man checkpoints in full battle gear, barely knowing how to use thermal scanners (if any).

Independent think tank IBON Foundation reported 10,148 COVID-19-related arrests** in Luzon from March 17 until 29. These figures, juxtaposed with the number of tests conducted by far (mostly availed by “officials holding positions of national security and public health”) falling only around 3,303, show a disparity of priorities and a glaring deviation from the World Health Organization’s (WHO) mandate to “test, test, test”.

On March 26, WHO issued a statement urging countries to not waste time in its efforts against the contagion and gave a list of six actions every country should take immediately. Unfortunately, the Philippine government is found wanting in its efforts to stop the spread of COVID-19.

As of this writing, at least 15 doctors have already succumbed to COVID-19 mainly due to shortage of personal protective equipment (PPEs).

Despite House Speaker Alan Peter Cayetano’s denial, hospitals’ calls for PPE donations and images of health workers’ in improvised PPEs in the social media expose the shortage not only in equipment but also in compensation.

On March 28, the DOH apologized as their call for volunteer health workers drew flak for its offer of P500 daily allowance. The department explained they are only following protocols.

On top of these, a number of health workers had difficulty in reporting for work as the public transportation got suspended in the first week of the lockdown. Most of them went to work and back home on foot. Pasig City Mayor Vico Sotto tried to persuade the national government to allow tricycles to cater to health workers but to no avail. Instead, what he got was summons from the National Bureau of Investigation (NBI) for allegedly violating the Bayanihan to Heal as One Act.

Apart from allotting hotlines for COVID-19, DOH’s contact-tracing seems to be too slow and inefficient. A report by the Philippine Daily Inquirer shows how DOH, after nearly a month, failed to locate the first local transmission, thereby missing the golden opportunity to contain the virus.

3. Ramp up production of tests and increase availability:

On March 22, the now-deleted post of Senator Francis Tolentino saying he tested negative for COVID-19 reaped anger among netizens for its brazen display of VIP testing practices. Tolentino is just one among a number of senators “accorded with courtesy” by the DOH while many persons under investigation (PUIs) are having a hard time getting their tests.

Based on DOH data analyzed by the ABS-CBN Investigative and Research Group, almost half of COVID-19 fatalities in the Philippines had tests delivered on the day or after death. To add injury, there is a growing number of patients dying without being tested.

As of March 26, COVID-19 trackers identified Philippines to be lagging behind Southeast Asian countries in terms of tests conducted. Vietnam did more than 30,000 tests; Singapore around 40,000; Malaysia around 21,000; and Thailand around 10,000. 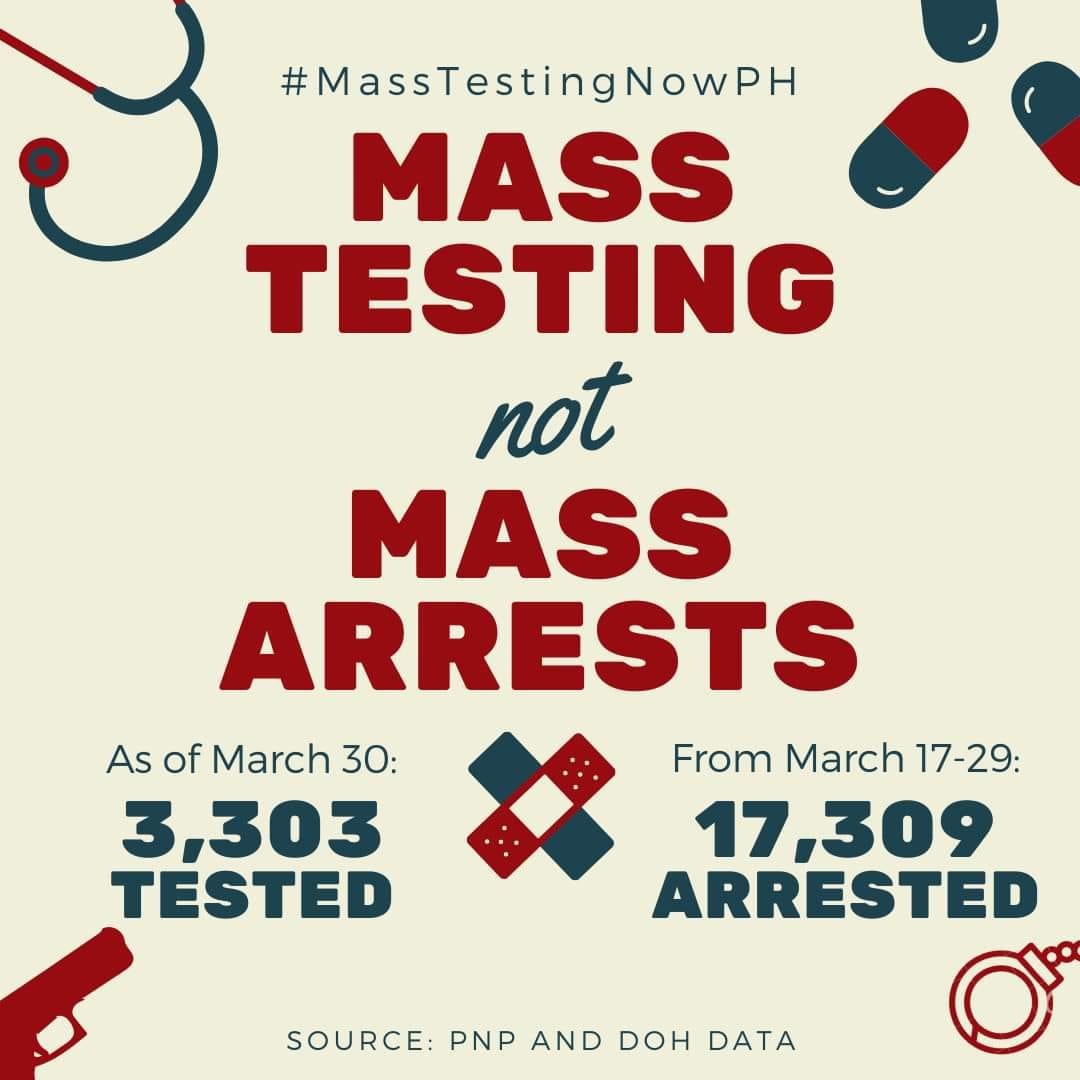 Thanks to the strong demand of progressive organizations and concerned individuals for mass testing, the DOH is set to conduct so on April 14. Funded by the Department of Science and Technology (DOST) and the UP National Institutes of Health, locally-made kits that could accommodate 26,000 tests will soon be available in selected hospitals nationwide.

4. Identify facilities that can be transformed into coronavirus health centers:

Due to shortage of space facilities in Quezon City, Mayor Joy Belmonte admitted some COVID-19 patients were just being sent home to observe self-quarantine.

To lessen scenarios like this, two hospitals namely UP-PGH in Manila and Jose M. Rodriguez Memorial Hospital and Sanitarium in Caloocan were approved by DOH to treat COVID-19 patients. DOH said that the Lung Center of the Philippines cannot be used as it has many lung center patients.

The Ninoy Aquino Stadium is also being transformed by the Philippine Sports Commission together with the City of Manila into a quarantine facility as a response to the growing shortage of quarantine spaces. Likewise, Iglesia ni Cristo (INC) has opened up the mammoth Philippine Arena in Bocaue Bulacan as COVID-19 medical facility.

However, Marikina Mayor Marcy Teodoro’s proposed testing facility is yet to be approved by the DOH claiming the facility has not met biosafety standards. Frustrated, Teodoro underscores time as an essential factor following WHO’s declaration of a global health emergency.

One major breach of quarantine protocols was committed by Senator Koko Pimentel. Supposedly on quarantine as a PUI, Pimentel was revealed to have been in at least two parties, in a grocery store, in Makati Medical Center and in other public places, exposing susceptible people to COVID-19, which he tested positive for on March 25. Upon its discovery, netizens turned to social media to demand Pimentel’s accountability. The DOJ released a statement about granting him “human compassion”—something common people have not been granted given the statistics on arrests and abuse of state authority.

6. Refocus government on suppressing the virus:

On April 1, twenty-one residents of Sitio San Roque in Quezon City were arrested at a portion of EDSA in Barangay Bagong Pag-asa around 11 a.m. for holding a protest. Identified to be members of Samahan ng mga Magkakapitbahay ng Barangay San Roque (SAMANA), the protesters are part of many residents who are demanding aid from the local government following the Luzon-wide lockdown that rendered them jobless.

That same night, #OustDuterte trended on Twitter worldwide as President Duterte ordered state forces in his speech to shoot people who cause public disturbance dead. The order particularly emphasized Left-leaning organizations as fingers point to Kadamay being the instigator of the said protest, which the latter denied.

Focusing too much on lockdown, Duterte’s strongman rule refuses to look at the reasons for the looming social unrest. IBON Foundation’s data reports Luzon is home to 14.5 million families of informal earners such as vendors, shopkeepers, salespersons, construction workers, PUV drivers, mechanics, manufacturing workers, among many others. As of 2015 government data, these families have monthly incomes below P10,000 with very little to no savings.

Instead of freeing and heeding their demands, the arrested residents were sued, each of them needing bail*** that could have just been spent on their daily needs. Because the government is yet to lay down a concrete plan other than strict lockdowns, they trample upon human rights which in the first place includes health and welfare.

States are also reminded by the United Nations High Commissioner to not abuse emergency measures to suppress human rights.

“Moreover, emergency declarations based on the Covid-19 outbreak should not be used as a basis to target particular groups, minorities, or individuals. It should not function as a cover for repressive action under the guise of protecting health nor should it be used to silence the work of human rights defenders,” the UN experts said.

*Ibong Adorno seeks to contribute to the ever-ongoing discourse on the national situation, pop culture, and other texts in need of close reading through writing accessible capsule critiques.

*Of five, two became positive for COVID-19 while two others are PUIs under quarantine as of this writing.

The post How is the Duterte administration faring in the WHO mandate on COVID-19? appeared first on Bulatlat.