How the poorest Moro communities observe Ramadan during lockdown 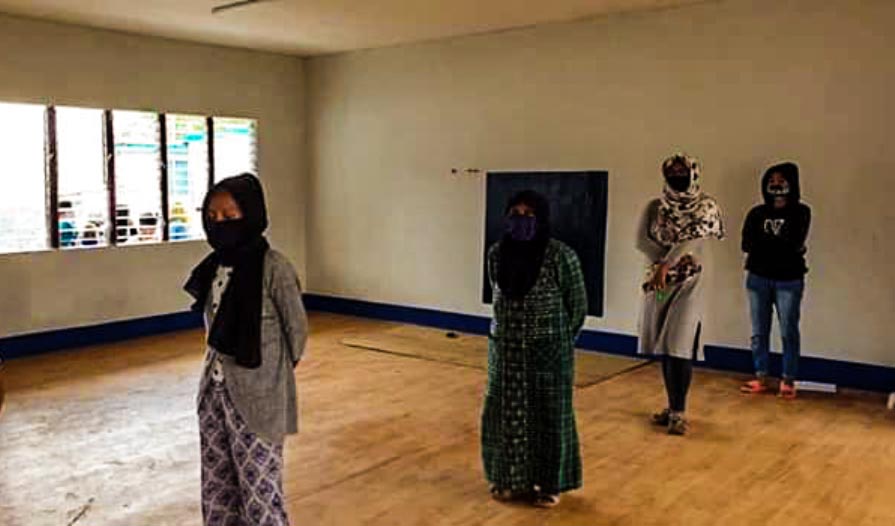 The observance of Ramadan proves to be challenging for Moro communities because of stricter measures imposed due to COVID-19 lockdown. The poorest communities, particularly evacuees from Marawi, lament their exclusion from government’s assistance programs.

MANILA — As the extension of the enhanced community quarantine went hand-in-hand with the beginning of the holy month of Ramadan, the Moro people are faced with the challenge to practice their faith. On April 24, President Rodrigo Duterte has extended the lockdown not only in Metro Manila, but also in all other “high risk” provinces until May 15. This extension would also entail stricter measures; the problem then comes with how the people, especially the Moro communities could cope through what is now described as the ‘new normal’.

Ramadan is the ninth month of the Muslim year, a time when Muslims from all over the world refrain from eating between sunrise and sunset. During this holy month, followers of Islam rejoice, for this was the time when Allah first revealed the words of the Qur’an to Prophet Mohammed. Aside from the widely-known practice of self-restraint, Ramadan is also a time to repent for sins and strengthen their faith. On the other hand, this month is also a mark of families and communities coming together to pray. Thus, aside from the individual spiritual growth, this season is also observed with the powerful symbol of unity and togetherness.

Living through this dreadful pandemic has undoubtedly disrupted all aspects of everyday life. This outbreak and the government’s misplaced priorities have been very devastating to the marginalized and impoverished Moro communities.

Scarce resources for the holy month

Harris Sulayman, 23, is a BS Education – Math student from the Cotabato City State Polytechnic College. He is the current associate president of their Supreme Student Government and also a student trustee in their state college. During the start of the lockdown in Cotabato, their student council has been very active in organizing relief activities to support their fellow students who have been hardly hit by the ongoing health crisis.

“In this time of Ramadan, my fellow Moro students have been struggling financially. Their parents could not send them money, and most of them are really depending on food rations from the municipality or the local government. Some of them are left with no other resources for their Iftar (evening meal during Ramadan). Our student council took the initiative to provide relief efforts to help them somehow,” Sulayman told Bulatlat in an online interview.

Sulayman also shared that Moro students in their state college who are renting in apartments are excluded from receiving rations from the barangay, because they are not the primary owners of the houses.

“We noticed that there was no immediate action from the administration, so we thought of tapping our city LGU about the stranded students in their boarding houses,” Sulayman said.

The student body was able to provide 144 food packs for each batch of relief operations. For the third batch, they provided Ramadan food packs for their fellow Moro students from the student council fund and donations from faculty members.

Even with their relief efforts, Sulayman said that those were not enough. The banning of mass gatherings also meant that the Taraweeh (night prayer during Ramadan) could not be done in congregation, as how Moro communities have been accustomed to. Limited mobility also meant limited resources which Moro families could stock up.

“The government should prioritize those who do not have decent jobs, and without benefits. They should double-up efforts for relief especially those who need it the most,” the student leader said.

Almost similar with the situation of Moro communities in Cotabato, Ustadz Alpa Utto, 42, and his community are faced with the multiple burdens in observing Ramadan. He is an imam (Islamic priest) and a village president of the Bakwit Village in Saguiaran, Lanao del Sur.

“We are internally displaced persons from ground zero, Marawi. Since the siege in 2017, we were forced to flee our homes and live in this boarder of Saguiaran, Lanao del Sur. There are almost 136 families from eight evacuation centers who have been residing here in the Bakwit village. Until now, we are not allowed to return home,” Utto said.

According to Utto, members of their community are really challenged to observe the holy month, let alone acquire food for their families during Iftar. He also added that families have been longing to perform the jama’ah prayer (congregational prayer) in their mosque as it is believed to have more social and spiritual benefit than praying by oneself.

“Even with the yearning to perform the jama’ah, Moro residents here are afraid of getting caught. The BARMM (Bangsamoro Autonomous Region in Muslim Mindanao) has proclaimed temporary suspension of the congregational prayers,” he shared.

“The quarantine measures are strictly imposed here. Military checkpoints are very stringent, and those who violate the curfew and do not wear masks are either fined, made to do community service, or even arrested,” he added.

“Our biggest question amid all this is how come we are not counted as beneficiaries of the government’s social amelioration program? Only about 1-2% of the population here BARMM are qualified to receive the SAP. There is also no medical assistance, even vitamins and COVID kits provided for us. In more than a month of this quarantine, the local and provincial governments have only extended relief once in our communities,” Utto said.

According to their LGU and local Department of Social Work and Development, internally displaced persons are not covered by the government’s social amelioration program because they are not original residents of Saguiaran. According to Ustadz Alpa, there are only about 400 slots for SAP beneficiaries, and these are divided into 30 barangays. Only about 20 individuals have availed the assistance program.

“They said that bakwits (evacuees) like us are not qualified to receive aid. We are calling on the national government to help us. We are more than qualified to receive assistance because we have experienced almost total loss of property and livelihood. The tricycle drivers, ice candy vendors, carpenters, and the rest of us with little to no sources of living are deserving of aid from the government,” Utto said.

Utto also shared that Moro communities in nearby municipalities have also not received any assistance and relief from the government. “Authorities are quick to post on social media whenever they come here and conduct relief operations. Their posts become viral, but majority of us are still faced with the harsh reality of hunger and poverty,” he said.

Even among the ranks of the poorest of the poor, there are layers of considerations before they can be qualified to receive relief from the government. There is also no regard for majority of Moro families who are faced with the challenge of practicing the Ramadan season amid the health crisis.

Amirah Lidasan from Suara Bangsamoro and Moro-Christian People’s Alliance said that the Moro people are faced with the ‘abnormal’ observance of Ramadan. Even with this circumstance, there has been no concept of “Ramadan relief” from the government.

“Weeks before the declaration of lockdown, various Moro communities have already been suffering from military offensives. In the 2nd district of Maguindanao, military forces have conducted a 10-day military operation to supposedly quell the BIFF (Bangsamoro Islamic Freedom Fighters); but we all know that the real victims here are the civilians who have time and again been forced to evacuate from their homes,” Lidasan said.

Lidasan also shared that the Moro people in Basilan, Sulu, and Tawi-tawi have reported how their livelihood has been paralyzed by the lockdown. Most of them live in the mountains, which entails them so much effort and time just to go down and replenish their resources.

“This quarantine and the order to stay home could have been bearable if the government has not inflicted coercive measures and instead provided sufficient aid to the people. While most of us actually struggle to stay home, they should have clear plans on how to eliminate the virus, and not eliminate the people. This Martial Law-like quarantine just fuels the bravado of the military and the police” she added.

Test of faith and humanity

In these trying times, it might be difficult to see even a tinge of a silver lining. While some have the privilege to insist that the ongoing crisis should not be an excuse not to practice Ramadan, the most vulnerable among the Moro people have shown that they are the ones with the strongest faith in Allah.

“During Ramadan, we usually stick to the concept of sab’r (persistence) — that we should stretch our patience, we should refrain from getting outraged, and that our disposition should always be attuned to fasting. But we could not simply preach that to our brothers and sisters who almost have nothing to provide a feast on their tables. If anything, the poor have the largest sab’r. Even after all the hardships they face, they remain faithful that our Allah, could relieve their poverty,” Lidasan said.

The Moro people, through the course of history, are the ones who are most conscious of discrimination, deprivation, and inequality, and yet they have remained steadfast to our faith. This holy month reminds Moro people of the true essence of Ramadan, that faith is also tested through a sense of humanity.

The post How the poorest Moro communities observe Ramadan during lockdown appeared first on Bulatlat.