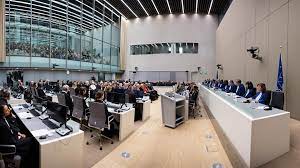 Prosecutor Fatou Bensouda has not yet decided whether she will move the phase to a formal investigation, citing restrictions brought by the COVID-19 pandemic

International Criminal Court (ICC) Prosecutor Fatou Bensouda said there is “reasonable basis” to believe that crimes against humanity were committed in the killings related to President Rodrigo Duterte’s war on drugs.

“The Office is satisfied that information available provides a reasonable basis to believe that the crimes against humanity of murder (article 7(1)(a)), torture (article 7(1)(f)) and the infliction of serious physical injury and mental harm as other inhumane Acts (article 7(1)(k)) were committed on the territory of the Philippines between at least 1 July 2016 and 16 March 2019, in connection to the War on Drugs campaign launched throughout the country,” Bensouda said in her report released Tuesday, December 15.

Bensouda has not yet decided whether she will move the phase to a formal investigation, citing restrictions brought by the COVID-19 pandemic. She earlier announced the next move would be decided within the year 2020.

“The Office anticipates reaching a decision on whether to seek authorisation to open an investigation into the situation in the Philippines in the first half of 2021,” said Bensouda.

She will open an investigation if she determines that the Philippine justice system was unable or unwilling to prosecute these killings by itself.

If it moves to an investigation phase, Prosecutor Bensouda can request the ICC judges to issue summons.

Although there is no investigation yet, National Union of Peoples’ Lawyers (NUPL) president Edre Olalia described the latest report as “rays of hope (that) have peeked out of the pitch dark clouds of impunity.”

“Our government and law enforcers must take this seriously and get the message loud and clear…We hope real and effective redress can be achieved in time,” said Olalia.

In the report, Bensouda said there was a “limited number of investigations and prosecutions.”

“Open source information indicates that a limited number of investigations and prosecutions have been initiated (and, in some cases, completed) at the national level in respect of direct perpetrators of certain criminal conduct that allegedly took place in the context of, or connection to, the War on Drugs campaign,” said Bensouda.

A Rappler analysis in 2019 found that investigative gaps and prosecutorial loopholes allowed thousands of cases in the drug war to go unsolved.

In June, Justice Secretary Menardo Guevarra announced the creation of an inter-agency drug war panel that would reinvestigate the more than 5,000 people killed by policemen in legitimate operations. It aims to close the prosecutorial gaps, setting aside presumption of regularity, and will review whether complaints have to be filed against cops.

But the Deparment of Justice (DOJ) missed its November deadline.

Bensouda said she will “continue to closely monitor developments” of the DOJ drug war review panel.

Guevarra said last week that an initial report may be expected soon “in a couple of provinces with the highest incidence of police operations resulting in deaths, particularly in Bulacan and Pampanga.”

International Law professor Romel Bagares, also among petitioners in the Supreme Court to declare the drug war unconstitutional, said the DOJ’s drug war review may be the last factor in Bensouda’s decision.

“It may be reasonably inferred the Office of the Prosecutor (OTP) is wrapping up the complementarity question phase,” Bagares said.

Complementarity refers to the determination if the Philippines is willing and able to investigate by itself.

“This is a real advance. For the first time the OTP identified the international crimes it said it had reasonable basis to believe were committed at the time the ICC had jurisdiction over the Philippines,” said Bagares.

Bensouda added in her report: “The information available also indicates that criminal charges have been laid in the Philippines against a limited number of individuals – typically low-level, physical perpetrators – with respect to some drug-related killings.”

The DOJ review was also cited by the United Nations Human Rights Council (UNHRC) as among the reasons for its watered-down resolution. Rather than launch its own inquiry, the UNHRC offered technical assistance to the Philippine government’s domestic investigations.

Guevarra had earlier said the review panel will be enough for the ICC to discontinue its inquiry. Duterte has withdrawn from the ICC, although the Rome Statute provides that examinations which were opened before the withdrawal will remain valid.

The Supreme Court has not made a decision on petitions seeking to declare the war on drugs unconstitutional. – Rappler.com