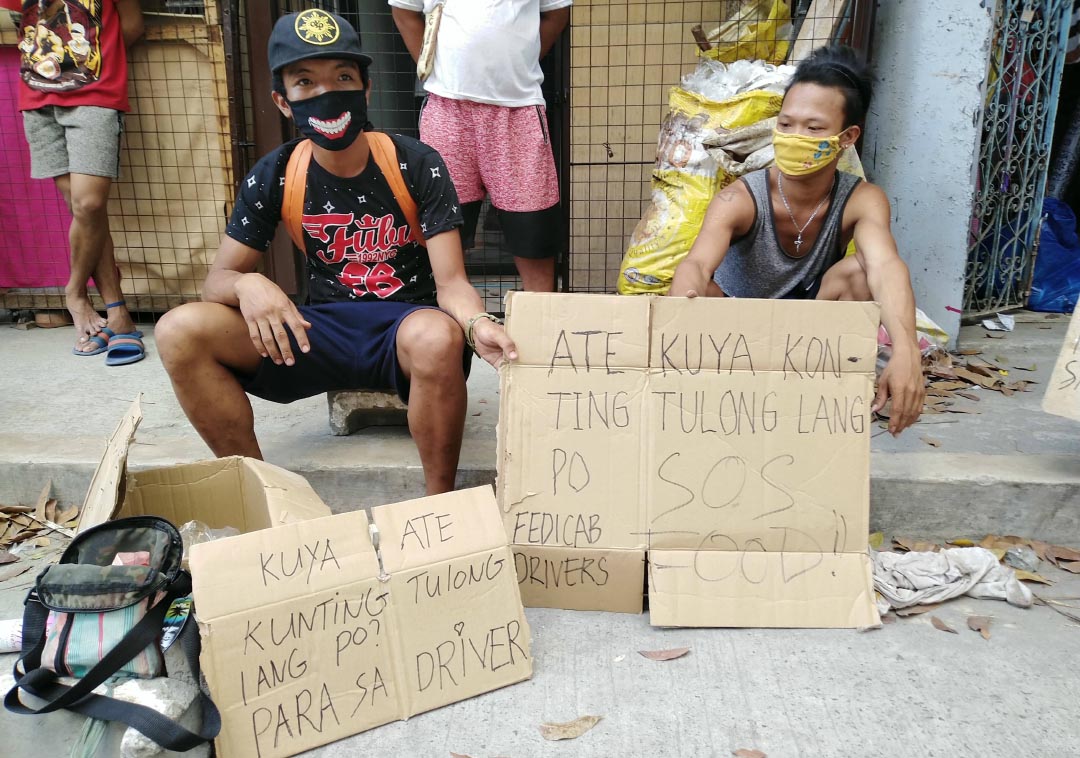 That light is our hope, that light is Christ, and his light is pointing us to the way, the way that is for us to tap into our very humanity to think beyond ourselves, to go beyond ourselves and instead see the situation of others. It’s not me, it’s them. Their comfort above my comfort. Their safety above my safety. The question now is, like Jesus, am I able to offer my life for the salvation of others? So that others would no longer weep in hunger, in isolation, in separation?

This week, I was asked to bless a mother who recently died. When I arrived at the funeral parlor, I was immediately told by the manager that the mother did not die of COVID-19, but from a heart attack probably for worrying too much. I simply dismissed it, but when he opened the door of the vehicle where the body was laid, I understood why he had to tell me this. She was lying on a stretcher on the floor of the jeepney sans the coffin. The family could not afford a coffin and they could not take advantage of any assistance from the government yet. They were told to return after the lockdown. But that could take months and they have to bury their mother. I was also told that a daughter who just gave birth was not allowed to attend the funeral rites.

Another time, I went to bless the ashes of a man who died of a heart attack while on duty as a guard in Muntinlupa. The person who fetched the body had to ask that it be cremated because he anticipated that he would have a hard time transporting the body to the house of the sister. No family member was able to see him for the last time, especially his wife and children who happened to be in Samar. The travel ban made it impossible for them to see their dad, husband, and brother for the last time.

Last week, a group of hungry residents of one of Quezon City’s depressed areas were rounded up by the police for violation of the quarantine, or the Bayanihan To Heal As One Act (R.A. 11469). They were lining up for food assistance but instead of helping them with their most basic need – food – the police ran after them, beat them, and put them in prison, while our humane justice system imposed such a steep bail for the freedom of those who were caught and imprisoned. They were hungry and they were simply asking for food. One mother said: If not because of the lockdown we would not be asking for the government’s help. We, the poor people, we are industrious.

Since the community quarantine took effect in Metro Manila, millions have suffered in various ways — family ties have been severed; children, elderly, and sick going hungry; small businesses closing down; the most vulnerable have become even more vulnerable; and people going paranoid and turning against each other to the point of endangering the lives of the frontliners.

This is an extraordinary time and never would we have imagined that we would experience this. All the while we thought that scenes like these only happen in the movies, but it is happening now.

The Lord is risen! Alleluia!

That is the usual greetings that we would hear during Easter, but where is God in the midst of our suffering?

In today’s Gospel reading (John 20:1-9) we hear of the story of Mary Magdalene going to the tomb so early in the morning to anoint the body with spices (Mark 16:1, Luke 24:1), but was shocked to see the heavy stone covering the tomb already rolled to the side. In our Gospel today, Mary ran to Peter and the disciple whom Jesus loved to tell them of the news, that the Lord was no longer in the tomb. And to think she did not even go inside the tomb.

But perhaps what is worth noting is how the disciples, on seeing the empty tomb, believed. They now understood what Jesus has been telling them for a long time – the temple will be destroyed and be raised up again on the third day.

Amid the darkness that we are experiencing it is hard for us to even think of the silver lining in the dark clouds. We are concerned with our desperate situation, with how we could overcome these problems that suddenly were thrown at us. We tend to look for people to blame for our situation. We look for things within our grasp for us to understand our situation, for us to find comfort, for us to find relief. We could not see beyond it, but only if we look up, we would see that light, that tiny point of light that breaks the darkness.

That light is our hope, that light is Christ, and his light is pointing us to the way, the way that is for us to tap into our very humanity to think beyond ourselves, to go beyond ourselves and instead see the situation of others. It’s not me, it’s them. Their comfort above my comfort. Their safety above my safety. The question now is, like Jesus, am I able to offer my life for the salvation of others? So that others would no longer weep in hunger, in isolation, in separation?

We may not have seen the resurrection, but we believe and our belief must bear fruit in our life through our actions, through our very life. Just like Jesus, we are to be that light that would point to our very hope that is the love of God. We are to be instruments of God’s love to our brothers and sisters who at this time is in dire need.

How are we to become instruments of God’s love, then?

The post Instruments of God’s love appeared first on Bulatlat.