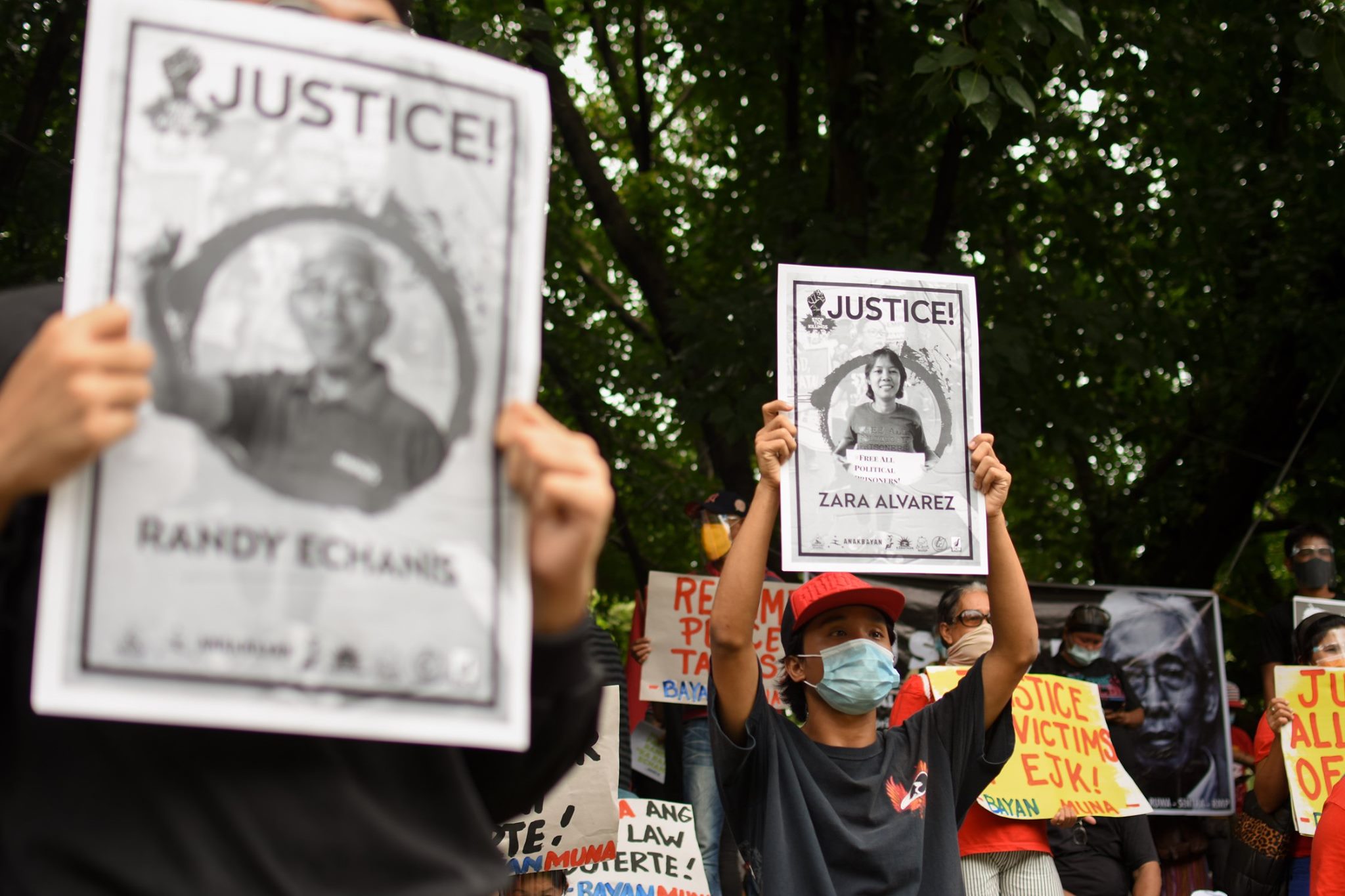 They urged the Philippine authorities “to carry out an immediate, thorough, impartial, and transparent investigation into Alvarez’s murder, to identify all those responsible, bring them before an independent tribunal, and sanction them as provided by the law.”

MANILA – International human rights organizations called for an end to what they described as “cold-blooded killings” of activists in the Philippines.

This is after the killing of another activist, Zara Alvarez, in Bacolod City on Aug. 17. A week earlier, Anakpawis Chairperson Randall Echanis was also murdered inside his rented apartment in Quezon City.

Lawlor added that Alvarez had been “smeared, red-tagged and threatened for years.”

In a statement, the International Coalition for Human Rights in the Philippines (ICHRP) condemned the killing of Alvarez saying that “human rights defenders, farmers, farmworkers and civilians are being slayed one after the other with brazen impunity.”

“The Duterte government’s policy of political killing merits international condemnation. These are our colleagues and fellow human rights advocates who are being killed like cattle,” ICHRP Chairperson Peter Murphy said in a statement.

Murphy said as a paralegal, Alvarez has helped in bringing the cases of human rights violations in Negros to the UN Human Rights Council. In December 2019, a high-level delegation of lawmakers, church people, and trade unionists visited Bacolod City with the help of Alvarez who at that time was also a victim of harassment and red-tagging.

“This is so tragic,” said ICHRP vice-chairperson Rev. Jeong Jin Woo said who was then part of the high-level delegation last December.

“Zara was a brave defender of the poor and their rights. We witnessed in our visit in Negros her undeniable dedication to human rights work,” Woo added.

“This cycle of bloodshed cannot be allowed to continue,” Olano said.

He said the the international community should launch an urgent independent investigation into extrajudicial killings and human rights violations in the country “to put an end to overwhelming impunity and deadly violence under the current administration.

“Establish the facts, and take steps towards ensuring justice for victims and their families,” he added.

The Observatory for the Protection of Human Rights Defenders, a partnership of the World Organisation Against Torture (OMCT) and International Federation for Human Rights (FIDH) also expressed their strong condemnation to the killing of Alvarez.

They urged the Philippine authorities “to carry out an immediate, thorough, impartial, and transparent investigation into Alvarez’s murder, to identify all those responsible, bring them before an independent tribunal, and sanction them as provided by the law.”

The group urged Philippine authorities “to adopt effective measures to ensure the protection of human rights defenders in the country, as well as to ensure proper investigations into such killings and attacks.”

Robertson also pointed out how the new Anti-Terrorism Law can be misused as the Anti-Terrorism Council who will implement the law has the power to designate individuals perceived to be “terrorist.”

“The council is composed of officials from the executive department – some of whom belong to agencies long engaged in red-tagging,” he said.

Robertson added “the government has an obligation to ensure that all activists in the Philippines have the full protection of the law, and not be subject to harassment, attack, and murder.”

Meanwhile, Viva Salud, Karapatan’s Belgium-based partner organization also expressed their solidarity. “My thoughts go out to Ka Randy and Zara’s families and comrades in the Philippines. I feel their sorrow,” said Wim De Ceukelaire, director of Viva Salud in a Facebook post.

He said that he is also worried about his friends in the Philippine movement who might be fearing for their lives too. But, he said, he is “convinced that international solidarity encourages them to continue their fight for the right to health and a just and lasting peace.”

The post International rights groups call for an end to ‘cold-blooded killings’ in PH appeared first on Bulatlat.