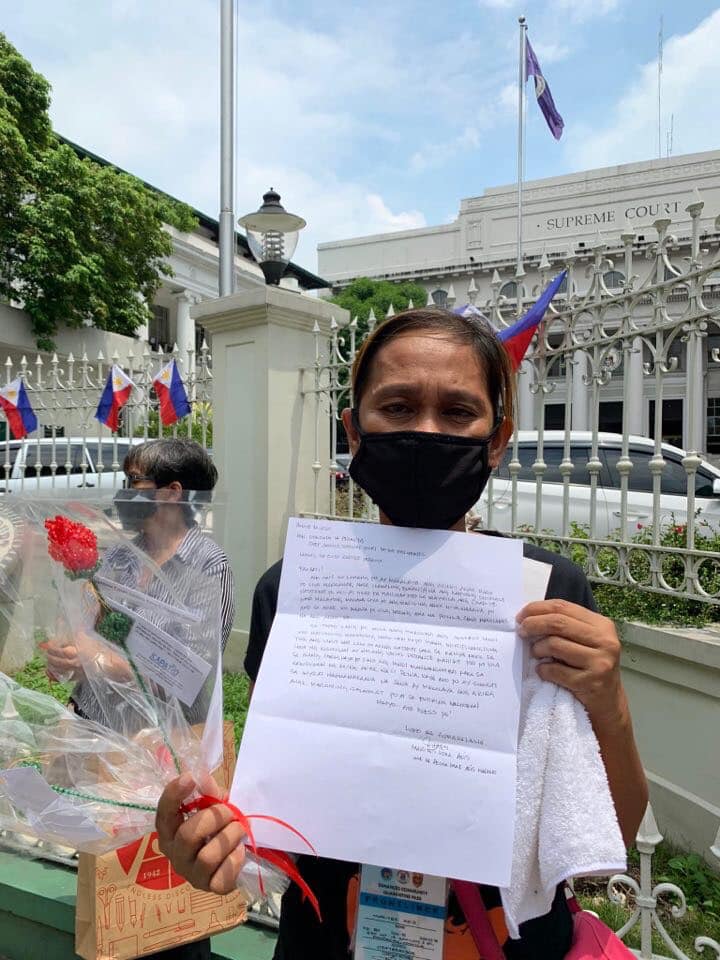 “It is not loneliness that is the cause of death in Muntinlupa but neglect and mismanagement. The Supreme Court needs to act now with the greatest exigency to save human life.”

Members of Kapatid, an organization of families of political prisoners, went to the SC on Tuesday, June 16, to appeal once again for immediate action. Last week, Chief Justice Diosdado Peralta said that “he believes that the case can be decided by June 16.”

According to Peralta, the one who is assigned to write the decision, has been stranded in the Visayas. He assured however, that once the member-in-charge is back in Manila, the petition would be immediately deliberated upon.

Kapatid brought red beaded roses handcrafted by political prisoners to symbolize their “double appeal” to the Justices to “vote for life” amid the reported deaths and the increasing number of COVID-19 positive in prison.

One of those who joined the picket was Marites Asis, mother of eight-months pregnant Reina Mae Nasino. In her letter addressed to the justices, Asis said her daughter and her child could possibly catch the virus inside prison. “Parang awa na nila. Sana makalabas na ang anak ko,” (Have mercy. I hope my daughter will be released) Asis said in her letter.

Nasino has been detained at the Manila City Jail Female Dorm since November last year. She was arrested together with two activists at the office of Bagong Alyansang Makabayan (Bayan) in Tondo, Manila and charged with false charges of illegal possession of firearms and explosives.

“We pray that the Supreme Court will choose to vote for life in favor of the most vulnerable to the COVID-19 pandemic now invading prison facilities and also out of compassion for Reina Mae Asis Nasino who stands in danger of losing her first child,” said Fides Lim, spokesperson of Kapatid and wife of the 71-year old detained peace consultant, Vic Ladlad.

In their petition, the families asked the SC to temporarily release 22 political prisoners and persons deprived of liberty (PDLs) who are vulnerable in contracting the disease.

According to the Bureau of Jail Management and Penology (BJMP) as of June 11, at least 745 prisoners and 125 personnel were COVID-19 positive. Of the 745 COVID-19 positive prisoners, 321 are active cases, 388 recovered and six have passed away. The Bureau of Corrections has 222 reported cases of COVID-19.

There are also several news reports of deaths inside prison but the reason was not clear. Kapatid has earlier called on the government to provide detailed reports on jail conditions and transparency on the reporting of prison deaths and other COVID-19 related information.

“It is truly grievous that after officials bragged that prisons in the country are 100-percent safe from the fast-spreading disease, they are now saying that the spike in fatalities may be attributed to loneliness,” Lim said, pertaining to the recent claims of BuCor spokesperson Gabriel Chaclag who attributed the rising death toll at the National Bilibid Prison to “loneliness” because relatives are not allowed to visit since the imposition of lockdown.

“It is not loneliness that is the cause of death in Muntinlupa but neglect and mismanagement. The Supreme Court needs to act now with the greatest exigency to save human life,” she added.

Today is also the first anniversary of Kapatid’s re-establishment since martial law years.

The post Kin of political prisoners call on SC justices to ‘vote for life’ appeared first on Bulatlat.