Locked up in the PH Embassy’s basement, 38 OFWs in Syria need urgent rescue and repatriation 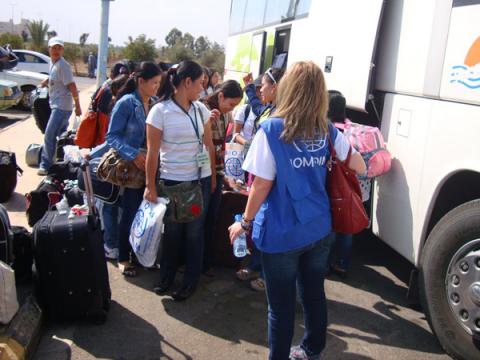 More than a month after immediate relatives called on the Duterte government to rescue 52 OFWs locked up at the Philippine Embassy’s shelter in Syria, 38 Filipino women who were victims of human trafficking, illegal recruitment and abuse continue to languish under subhuman conditions. Included in this group were trafficked minors who endured extreme maltreatment from their employers and life-threatening situations in ISIS-held territories. Many have completely lost contact with their families. These OFWs were already bound to be repatriated months ago, some even as early as February this year but according to the OFWs, embassy officials have been demanding huge sums of money before they get allowed to be released. Their relatives back in the Philippines have already raised their demands to OWWA, OUMWA-DFA and even directly to Malacanang but to no avail.

Migrante International has condemned the Duterte government for its inaction to the demands of the 38 remaining OFWs who were recently transferred and locked up in the embassy’s basement.

According to the Migrante, the OFWs fear that their lives are now in peril since they won’t be able to get out easily from the basement in case of fire or any other emergency.

“How can a government office tasked to protect and uphold the welfare of overseas Filipinos do this to distressed OFWs? Migrante International demands that the embassy officials and personnel involved in extorting and abusing these OFWs be investigated, charged and be sent to jail if found guilty,” the group stressed.

Embassy officials claim that they are unable to repatriate the distressed OFWs since they have pending cases and that Syrian courts are currently closed due to lockdown restrictions. Exit visas and penalties that need to be paid were also cited. However, Migrante International countered that their alibis are ludicrous since embassy officials are just shifting the blame when they are supposed to intervene for these OFWs for humanitarian reasons.

It is also outrageous, the group said, that the Duterte government’s budget priorities are intentionally misplaced at a time when many OFWs are stranded and distressed as they continue to be hit by the global crisis and lockdown restrictions.

“The Duterte government will not be providing increased funding for legal assistance and other DFA services for troubled OFWs. The regime allocated more funds for war, militarization and in attacking human rights instead of delivering services for our kababayans impacted by the COVID-19 crisis. The DFA and the Duterte government are both answerable to the corruption issues being raised by Syria OFWs. The OFWs are already inside the Philippine Embassy but they are being held incommunicado by embassy officials. This is a serious violation of their rights and their families back home are very worried and alarmed. For victimizing distressed OFWs in Syria with extortion, corrupt officials must be held accountable and face the consequences of their actions before the law,” Migrante International stated. (Photo of OFWs in war-torn Syria)#