Marcos, Robredo pull media stunts but get no closer to a recount 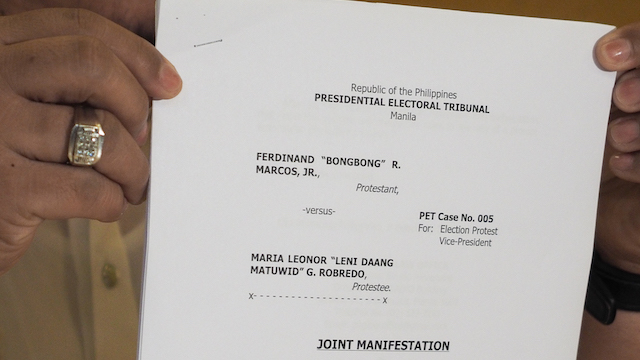 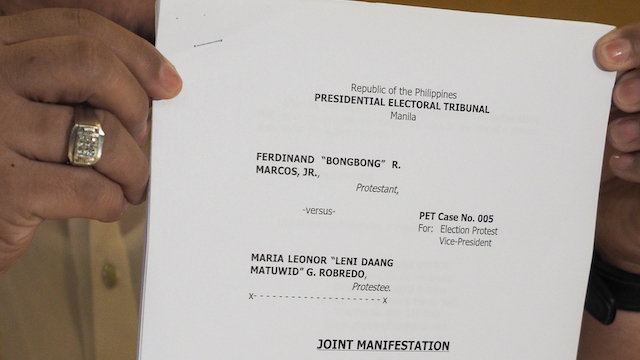 MANILA, Philippines – The week saw the word war between the camps of Vice President Leni Robredo and defeated rival Ferdinand Marcos Jr escalate into media stunts that got them no closer to opening the ballots to do a recount.

The recount would resolve a long drawn-out dispute over the result of the last vice presidential election. Marcos lost to Robredo by only 263,473 votes in May 2016.

A dare made by Marcos and accepted by Robredo’s lawyer, Romulo Macalintal, initially promised to clear the way for ballot recount. Marcos asked the Vice President to withdraw “all and any pending motions” before the Presidential Electoral Tribunal (PET) that have supposedly prevented them from moving forward.

But what was supposed to be a simple gentleman’s agreement that should be fulfilled on Wednesday, February 7, turned into a media circus.

The camps of Robredo and Marcos whipped up separate documents where they would indicate their intention to withdraw any motions that have delayed the electoral protest. The documents – a “joint manifestation” from the Marcos camp, and “joint motion” from the Robredo camp – remained useless because one side refused to sign the other’s document.

On Tuesday, Macalintal announced he was accepting Marcos’ dare. He asked the other camp to meet him at a fastfood restaurant the following day.

But Marcos responded by sending the media later on Tuesday copies of his signed “joint manifesto” to withdraw “all and any pending motions relative to his election protest,” and a photo of him signing it. (READ: Marcos signs document withdrawing motions that delay VP vote recount)

On Wednesday, Macalintal showed up at the restaurant with his own “joint motion.” Marcos’s lawyers didn’t appear.

Both sides trashed each other’s documents.

Macalintal said the joint manifestation was no good because a “manifesto” is a mere declaration that will not prompt the PET to take an action. It should be a joint motion signed by both camps, he said.

“If we file it, the court will ask us, ‘What do you want us to do with your manifestation?’ ‘Wala po! (None).’ The court cannot take action on this. What the court will do is that it will take note of the manifestation,” he explained, citing the 2005 Supreme Court decision in Neri v. Dela Peña.

Rodriguez fired back, saying Macalintal’s joint motion was useless because it wasn’t signed by Robredo herself.

“Without Mrs. Robredo’s signature, the motion is a mere scrap of paper and may be later disowned by her as having been signed without her authority. Tila gustong makalinlang na naman (It seems they want to put one over us again),” Rodriguez said.

He also said Robredo’s camp wasn’t sincere with its intentions: “It has become evident that Maria Leonor ‘Leni Daang Matuwid’ Robredo is not willing to withdraw her pending motions before the Presidential Electoral Tribunal.”

Rodriguez said the Macalintal’s motion only withdraws “pending” motions but not “future” ones. He said Marcos’ manifesto is “more sincere” because it covers both.

It’s an argument that Macalintal dismissed.

Rodriguez also slammed Macalintal’s move to invite them to a fastfood restaurant: “Signing a major pleading in a pizza restaurant shows an utter lack of respect for the judicial process. There is a proper way to do things and this involves going to the law office of your opposing counsel and handing over the proper documents to them.”

Rodriguez said they went to the office of Macalintal instead to deliver a copy of the joint manifestation.

It’s not clear how many pending motions there are to resolve before they can proceed to the recount of votes. Macalintal claimed the Marcos camp has a pending partial motion for recommendation dated December 4, 2017. It asks PET to reconsider its earlier ruling allowing Robredo’s camp to secure soft copies of the ballot images.

Rodriguez claimed this was resolved back in January. – Rappler.com