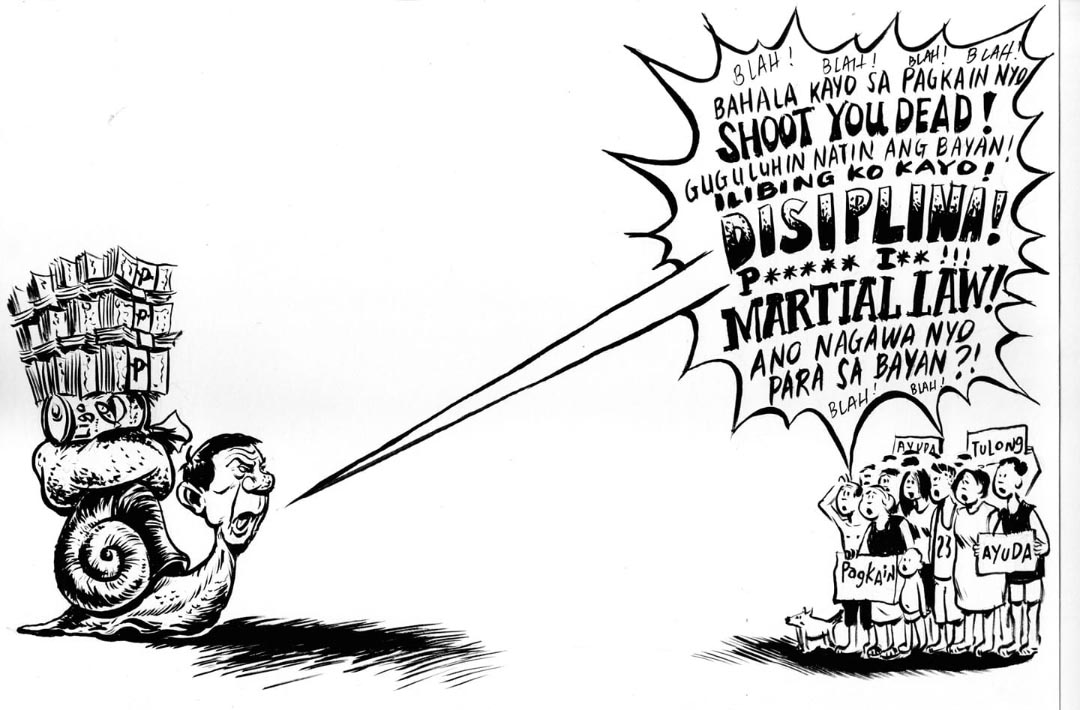 The Duterte administration has publicly declared a “martial law-like” implementation of the enhanced community quarantine to supposedly fight the coronavirus 2019 (COVID-19) pandemic.

On Monday, Brig. Gen. Edgard Arevalo, spokesperson of the Armed Forces of the Philippines (AFP), confirmed the internal memorandum issued to Philippine Air Force personnel to prepare for “martial-law-like” role of the AFP and the Philippine National Police (PNP).

Arevalo said the AFP document was prepared after President Rodrigo Duterte announced in a televised speech that he might impose a martial law-like lockdown amid reports of quarantine protocol violations.

Arevalo was quoted as saying, “We believe there is nothing to be alarmed about in this natural reaction of the AFP to prepare and deploy when it becomes necessary…Law abiding citizens and those who follow the rules should not worry. There is no reason to be alarmed.”

That same day, a team of humanitarian aid volunteers on its way to distribute relief goods to urban poor communities was flagged down at a checkpoint in Norzagaray, Bulacan. The six volunteers of Sagip Kanayunan and Tulong Anakpawis were brought to the police station, their relief packs confiscated and turned over to the barangay. Copies of Pinoy Weekly, a publication belonging to the alternative media, and Linang, publication of Kilusang Magbubukid ng Pilipinas, were also seized.

Authorities claimed that the arrested volunteers, including former Anakpawis Rep. Ariel Casilao, violated Section 9 of Republic Act No. 11332 (An Act Providing Policies and Prescribing Procedures on Surveillance and Response to Notifiable Diseases, Epidemics, and Health Events of Public Health Concern), and violation of Section 4 of Executive Order No. 922 (Declaring a State of Public Health Emergency). Casilao was also charged with usurpation of authority for responding to the arrested volunteers while the rest are charged with inciting to sedition.

Organizations behind the relief efforts of Sagip Kanayunan have secured a food pass from the Bureau of Fisheries and Aquatic Resources (BFAR), the requirement needed to conduct relief operations and delivery of produce.

Apparently, the basis for inciting to sedition is the distribution of Pinoy Weekly and Linang, which, according to the National Task Force on to End the Local Communist Armed Conflict (NTF-Elcac) contains “anti-government propaganda.” Have they ever read Article 3 Section 4 of the 1987 Philippine Constitution? The last time we checked, free speech, free expression and free press remain even during a state of public health emergency.

Is this incident a portent of things to come? Several police and military officials have declared they will arrest all violators without warning. The powers-that-be find it hard to understand that hungry and poor Filipinos, in the first place, do not willfully violate the quarantine protocols but are forced by circumstances.

With government aid too limited and too slow, no-work no-pay workers find other means to survive. Most of them resort to peddling food in the streets. They face the danger of being arrested just so they could put food on the table each day. A lot of such accounts have been reported by the media.

For people’s organizations and NGOs, providing humanitarian aid is their humble contribution to getting through this crisis, and yet, their actions are criminalized. What ever happened to the bayanihan spirit often professed by government officials?

International and local human rights organizations, including the Commission on Human Rights, have reminded states of the need to uphold human rights in the time of pandemic. And human rights do not only refer to political and civil rights but also socio-economic and cultural rights.

The problem is that President Duterte and his military and police officials, including Cabinet members supposedly performing civilian functions, are only concerned with iron-fist ECQ implementation, violating human rights with impunity and disregarding the situation on the ground.

Four weeks after the enactment of Bayanihan to Heal as One Law, more health workers, including from main testing center, Research Institute for Tropical Medicine (RITM), become COVID-19 positive. Government agencies, meanwhile, are way below their target beneficiaries for social protection.

Aggressive mass testing, isolation of persons under investigation and persons under monitoring, along with effective education and provision of much-needed assistance to the most vulnerable should be the main preoccupation of the administration now.

The post Martial law-like lockdown does not combat COVID-19 appeared first on Bulatlat.