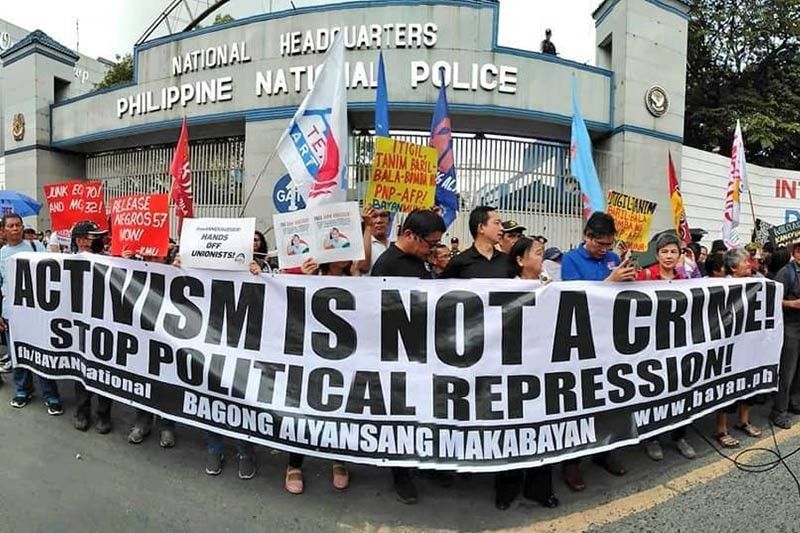 December 12, 2020 – Bayan-Europe (People’s Patriotic Alliance, Bayan) was launched today amidst the disturbing social situation in the Philippines, such as continuing human rights violations, red-tagging, vilification, systematic and violent attacks on progressive sectors, activists and people’s organizations by the Philippine military, the (National Task Force to End the Local Communist Armed Conflict (NTF-ELCAC) and by President Duterte himself.

Bayan-Europe is composed of Migrante-Europe, Gabriela-Europe, Anakbayan-Europa and PCPR-Europe. Eighty participants from the member organizations of Bayan-Europe, and from other allied organizations in the Philippines, Hongkong, Australia, Canada, United States, Belgium, and other countries, joined the online launching.

The Europe chapter of Bayan provides a platform of solidarity among Filipino migrants in Europe, advancing the Filipino struggle both in the home country and in Europe.

Prof. Jose Ma. Sison, Chairperson Emeritus of the International League of Peoples’ Struggle (ILPS) in his keynote message said: “You must serve as the regional information and campaign center in Europe for responding to the calls of BAYAN-Philippines and initiating campaigns and activities according to your own conditions and circumstances. You must fight not only for the rights and demands of Filipinos in Europe but also for our people in the motherland. You must do what you can to help them overcome their suffering and to help them bring to a new and higher level the struggle to oust the Duterte regime and carry forward their national democratic struggle against the unjust ruling system…”

Bayan-Europe echoed the call to oust Rodrigo Duterte, whose regime has been characterized by the breakdown of the rule of law, the violent and failed “war on drugs” (the more than 30,000 killings), the corrupt-driven and failed government COVID-response, the billions of wasted foreign loans to address the pandemic, the Php 19-Billion anti-insurgency program of the NTF-ELCAC (that included the arrests and killings of activists), the PhilHealth corruption scandal, the incompetent and failed DepEd online education and module, and other issues affecting the Filipino people.

Renato Reyes, Jr., Bayan Secretary General said: “It is important that Bayan-Europe directly support the efforts of the Philippine mass movement to resist state terror, to resist the Duterte regime, to fight for genuine freedom, democracy and peace. We hope you would be able to tell the European people what is happening in the Philippines. You can speak for our people in Europe, tell them the real situation, hopefully galvanize greater support for the struggle for social and national liberation”

Bayan-Europe consolidates the voices and collective strength of patriotic organizations and migrant Filipinos in Europe. “The launching of Bayan-Europe is highly significant politically, and shows there is now sufficient basis, in terms of Europewide membership in sectoral and other organizations and in specific countries to establish a regional alliance grounded on a comprehensive national democratic analysis and program of action,” stressed Dr. Carol Araullo, Bayan Chairperson.

Leaders of Bayan from local and international chapters and representatives from the different international peoples’ organizations delivered solidarity messages during the launching, encouraging the newly-created regional chapter of Bayan to advance the patriotic struggle in the home country, and to mobilize the migrant Filipinos in Europe.

Ms. Coni Ledesma, representing the International Women’s Alliance (IWA) said: “as a regional chapter of Bayan Philippines, Bayan-Europe will be able to gather the different patriotic and progressive organizations in Europe to join forces under a common program, this important step will unite the Filipino diaspora in Europe to build their collective strength and be an important organization to fight for the rights and welfare of Filipinos abroad; it will also raise the political consciousness of Filipinos abroad on imperialism, feudalism , and bureaucrat capitalism in the home country (in the Philippines) as the main problems of the Filipino people; it will develop activists that will take up the campaigns of Bayan Philippines the issues of Filipinos in Europe and be part of the overall struggle for national democracy.”

Bayan-Europe sustains the campaign for international solidarity work in support of the social concern efforts in the Philippines as well as the call for the ouster of the despotic Rodrigo Duterte and the condemnation of the human rights violations committed by the despotic regime.

The launching program culminated with a message from Gary Martinez, Chairperson of Bayan-Europe. He said: “The establishment of Bayan-Europe is a testament of our unwavering commitment to counter the Duterte’s regime attacks against organizations and activists inside and outside the country. Bayan-Europe will play a big role to weaken the support of the International community for the Duterte leadership.

“Above all, it is a big challenge for Bayan-Europe to reach-out to the vast number of Filipinos here in Europe—to arouse, organize and mobilize our fellow Filipinos! We will oust the monster in the palace. Long live the People of Europe! Long live the people who resist!”, he concluded.#