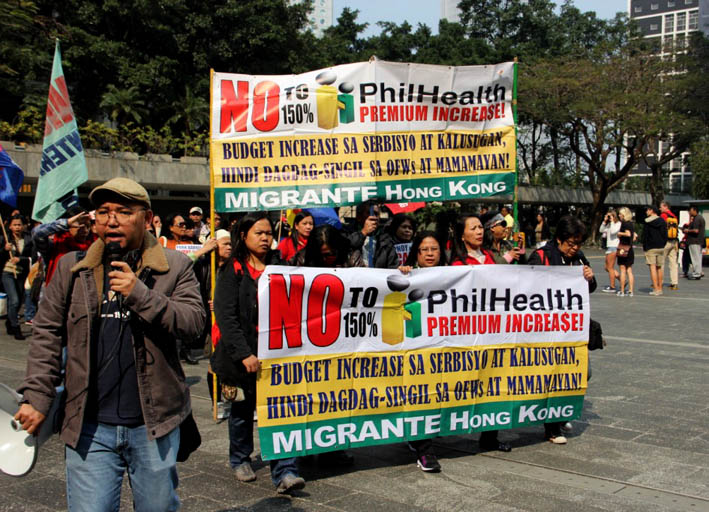 Five days to go before the full-scale implementation of President Duterte’s mandatory Philhealth membership and premium rate hike under his Universal Healthcare Law, leaders and representatives from different Filipino migrant communities overseas faced the media on Wednesday morning, 27 May, in an online press conference to voice out strong opposition against the imposition of this new state exaction amidst the damaging impacts of the COVID-19 crisis and pandemic.

Migrante International Chairperson Joanna Concepcion attributed the temporary suspension of the aforestated law’s implementation to the collective actions and resounding protests organized by OFWs. “Our fight is not yet over for what we really demand is the complete abrogation and junking of the unjust mandatory Philhealth requirement and annual premium rate increase,” Concepcion asserted. The OFW advocacy group believes that the temporary suspension was only meant to tranquilize OFWs and avert their indignation. “We will not allow ourselves to be fooled.  The mandatory Philhealth and premium rate increase is rooted from the Universal Healthcare Law enacted in February 2019 which was hastily signed and approved by President Duterte himself,” Concepcion added.

Marlon Lacsamana, the secretary general of Migrante Europe decried the state abandonment that befell OFWs in the continent. Lacsamana said, “embassies and consulates closed down so we no longer feel their presence that is why we migrants ourselves are helping each other to bring relief to our kababayans affected by the COVID-19 crisis. While there were some embassies and consulates that extended some help, it was not enough and it did not cover all Filipinos across Europe.” Lacsamana likewise  blasted the Duterte regime in its manner of distributing the $200 financial aid from DOLE. “We do not understand why they still have to deduct OWWA’s $25 exaction from the $200 cash assistance.”

According to Chat Dimaano of Migrante Korea, the 60 thousand documented OFWs in South Korea are already covered by the host country’s medical insurance which entitles them to free medical treatment. For Migrante Korea, this itself makes Duterte’s mandatory Philhealth useless and unnecessary. “With the exacerbation of the crisis in South Korea as many workers lose their jobs, this is already too burdensome for us that is why we support Makabayan bloc’s House Bill 6698. Our hard earned money should go directly to our families and not to government agencies like Philhealth which is riddled with corruption,” Dimaano pointed out.

For Mikee Santos of Migrante Aotearoa (New Zealand), President Duterte’s new state exaction is out of touch with reality and an insult to OFWs. “Many migrant workers who have been residing here for more than two years are already covered by New Zealand’s healthcare system. This mandatory Philhealth and premium rate hike is another addition on top of all the other state exactions already being imposed on us by the Duterte government which did not even bother to check out the real pulse and sentiments of Filipino communities here in New Zealand. ”

Speaking from Washington DC, Jeremias David of Migrante USA said, “This is not beneficial for migrants because Philhealth is not recognized in US hospitals. The Philippine government is robbing us of our hard-earned money which we should be sending back to the Philippines to support our families.” Many Filipino migrants in the US are hit hard by the crisis.  David added, “we have so many J1 visa holders who lost their jobs after the closure of hotels and restaurants here in the US. We demand that the Duterte government extend assistance to Filipino J1 workers. They are really enraged due to the absence of any effort from the government to reach out to them.”

In Saudi Arabia, many OFWs are afflicted by ‘no-work, no-pay’ arrangements. Marlon Gatdula of Migrante KSA related that the costs of goods have gone up due to Saudi Arabia’s imposition of the value added tax and the removal of subsidies to basic commodities. Gatdula also recounted the ruckus that occurred due to the disorganized distribution of food stubs in POLO-Riyadh. “OFWs reject this new Philhealth exaction because employers here in KSA are already obligated under state policy to ensure healthcare for their workers,” Gatdula remarked.

Meanwhile, repatriated OFWs in the Philippines are languishing in quarantine facilities without substantial aid from Duterte’s government agencies. Laorence Castillo, the head coordinator of Migrante Philippines’ Rights and Welfare Assistance Program lamented, “their troubles and anxieties are aggravated by the harsh reality of returning home without any form of livelihood. The entire process from repatriation to swab testing, from their subjection to the prolonged period of quarantine while awaiting for the test results are likened to marching into Calvary. Besides the swab testing, they have not received amelioration from any of Philhealth’s programs.” Castillo likewise revealed that quarantined OFWs like pregnant women, mentally distressed and the elderly  did not receive their required medical attention.

In addition to the impending 3% premium rate hike on Philhealth contributions, Migrante Philippines also expressed disgust over corruption issues plaguing the government agency. Philhealth is currently embroiled in the public uproar over overpriced test kits aside from the Php 154 Billion lost to overpayments and fraudulent claims. Castillo also scorned Philhealth for the alleged Php 16 million worth of questionable receipts issued by recruitment agencies. “The Duterte government is using the pandemic to rake in more profit from our troubled kababayans.”

Calling on all Filipinos to rise up and oppose President Duterte’s unjust Philhealth scheme, Dolores Balladares Pelaez of Migrante Hong Kong urged all Filipino migrants to unite and continue their protest against extortionate state exactions imposed by the government. “We are not merely asking for a suspension  but the complete scrapping of the mandatory Philhealth and premium rate increase. Right in the midst of the COVID-19 crisis, the Duterte regime abandoned us OFWs and our families as what we’ve seen with the gross ineptitude of the Duterte government in delivering services for stranded OFWs. They closed down many embassies and consulates around the world at a time when we badly needed their help. Instead of giving us relief and protection, the Duterte regime is assaulting us with additional state exactions. Let us unite together as Filipino migrants and reject Duterte’s dreadful policies,” Balladares-Pelaez concluded.