Money and other life lessons from legendary Ulysses 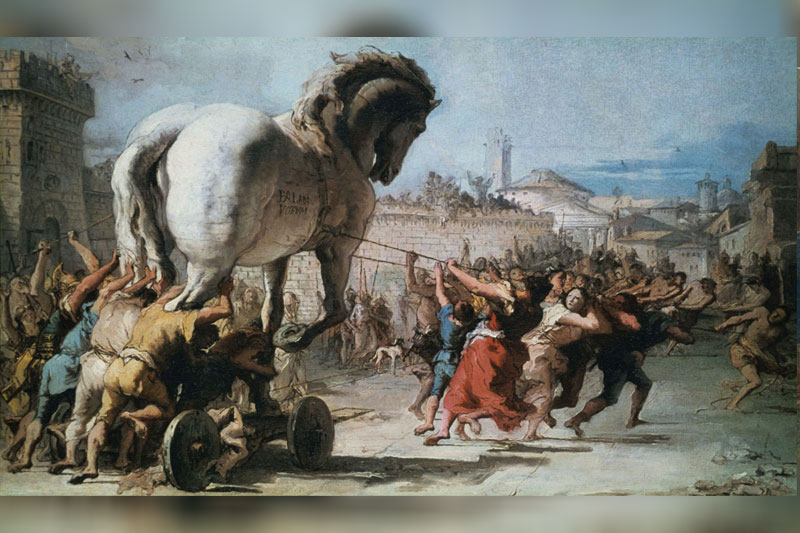 Are you familiar with Ulysses? Not the typhoon that just devastated us, but the legendary Greek hero. His Greek name was Odysseus but he was known to the Romans as Ulysses.

Ulysses was a man who thought like a behavioral scientist. He was the brains behind winning the Trojan War. If you’re familiar with the term “trojan horse,” that was his big idea. After ten years of war between the Greeks and the people of Troy, the former pretended to have conceded and abandoned the conflict. They gave a giant wooden horse as a peace offering. The Trojans triumphantly brought the horse as their victory trophy inside their city. They didn’t know that Ulysses and his men were inside the horse. And so, at the appointed signal, the Greek soldiers came out and caught the Trojans by surprise. Ulysses and his men won the war right inside the city of Troy.

Today, “trojan horse” is known as a trick or strategy that causes a target to invite a foe into a securely protected bastion or place. Do you remember that malicious computer program that tricks users into willingly running it? This is where the name was derived.

Back to Ulysses. So, after winning the war, he sailed back home and they were going to pass by an island with treacherous sirens. These sirens were actually monsters pretending to be beautiful women with enchanting voices. They would assure sailors who pass their island that they just want to entertain them with their beautiful melodies, but what they really wanted was to kill them.

Ulysses, the strategist, came up with this plan. He told his men to fill their ears with wax so they won’t hear the beguiling voices of the sirens. However, he wanted to hear the sirens’ voices and still survive. He ordered his sailors to tie him firmly to the ship’s mast. He told them not to untie him even if he would order and plead to do so.

As expected, when they finally passed by the sirens’ island, Ulysses was so enamored by the enchanting voices of the sirens. He wanted to dive into the sea and swim to the island to embrace the sirens. He strained against the bonds that held him to the ship’s mast. He pleaded and ordered his men to set him free. But because his sailors were already warned about this, they ignored his orders and rowed harder. To the bewitched Ulysses, the sirens looked as beautiful as Helen of Troy, but to the sailors with wax in their ears and not hearing the deceptive voices singing, they appeared as they were – hungry monsters with vicious claws.

So, what can we learn from Ulysses when it comes to making decisions and actions on money and life in general?

1. Commitment device. Ulysses knew that he was going to be enamored by the sirens, so he thought of a way to protect himself and his men from the dangers of the enchanting creatures. He decided on this while he was still in what we call in Behavioral Economics as the “cold state” (rational state). He knew that when they would hear the sirens’ voices, they would do things that are bad for them.

If you know that you will end up not saving regularly because of the many things that you “have” to buy, “tie yourself to a mast.” Sign up for an automatic saving and investing plan. For your dream funds with specific use, incorporate a barrier to withdrawal. Giving a name to your fund somehow makes it harder for you to misuse it. Your emergency fund intended for real emergencies such as losing a job, unexpected repairs, getting sick with not enough medical insurance, etc. should be placed in short-term money market placements instead of your ATM account.

When it comes to healthy eating, take out the unhealthy choices in your fridge and pantry. Think of the “sirens” in your life – impulse buying especially during sale, lure of junk food, binge watching, mindless scrolling on social media, etc. and come up with commitment devices to make it hard for you to do things you will regret.

2. Trojan horse. What “trojan horses” have you let in our sanctuary that make it difficult for you to win the battles you are fighting in life – be it about saving for old age, being healthy, having wonderful relationships. Check what’s in your cellphone, your bedroom, your pantry, your calendar. Let’s all be careful with “free gifts” that we allow to invade our life.

3. Sirens. Aside from those mentioned in number 1, who are the other “sirens” in your life? Right now, I am thinking of the politicians who “sing those deceiving songs,” promising the moon and the stars during election campaigns. We systematically make mistakes when choosing the right leaders because we choose in our “hot state” (emotional state). Come next elections, why don’t we try to “put wax on our ears” during the campaign, and instead really study the candidates’ credentials and past performances. Before the senatorial elections, Ryan Yu came up with a simple platform that allowed us to evaluate the “sirens.” Here are the links – Online Quiz to Help You Choose Your Senators Rationally and FQwentuhan With Ryan Yu.

Other sirens are those who promise high and sure returns with no risk. Please remember, there is no such thing. They are sirens singing deceiving melodies but are actually hungry monsters with vicious claws, just like those seen by Ulysses’ soldiers.

Who are your sailors who tied you to the mast? We all need people around us whom we can trust so that when we start getting crazy, they are there to protect us from ourselves. They have to be strong, trustworthy family, friends, or even advisers.

Typhoon Ulysses lesson. Preparedness is what we should all take away from the typhoon and the Greek hero. We always have typhoons visit our country, year in and year out, and we can only expect things to worsen because of climate change. There is no reason why we should be caught by surprise every single time a typhoon visits us. On the one hand, disasters like Ulysses are opportunities to see how resilient and helpful Filipinos are. But on the other hand, they should also be wake-up calls for us to demand more from our government. Both the national and local government should already have things in place like clockwork, because these disasters are already expected.

I hope the above Ulysses stories remind us of our weaknesses and also our ability to do something about them.#