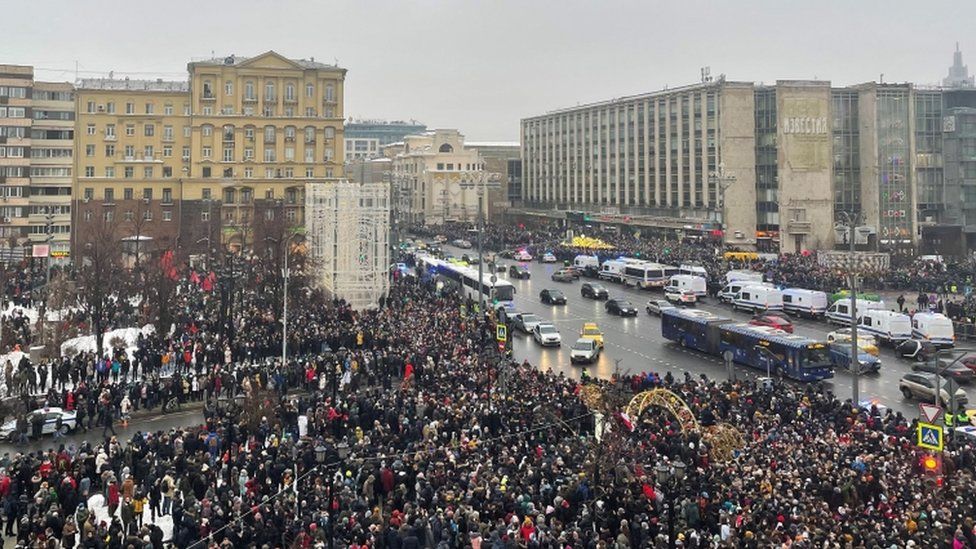 By Robyn Dixon and  Isabelle Khurshudyan

MOSCOW — More than 3,300 people were arrested Saturday in protests spanning nearly 70 cities and towns across Russia calling for the release of jailed opposition leader Alexei Navalny — a massive show of defiance against President Vladimir Putin and his widening crackdowns against challenges to his power.

Among the detained was Navalny’s wife, Yulia, and many heads of Navalny’s regional offices. It was the largest number of protesters taken into custody in a day since the Russian rights group OVD-Info began monitoring demonstrations in 2011.

The rallies — from Russia’s Far East to central Moscow — came less than a week after Navalny returned from Germany, where he recovered from a nerve agent poisoning in August during a trip to Siberia. Navalny was arrested shortly after stepping off the plane.

The wide turnout sent a powerful message to the Kremlin on the reach and resolve of Navalny’s network. The swift crackdowns by authorities underscored the pressure facing Russian authorities who must decide whether to keep Navalny behind bars.

Navalny once more proved he can mobilize mass support to confront Putin’s government, particularly among young Russians, and even when he is behind bars.

Scuffles broke out in central Moscow, and police beat protesters with batons, according to video posted by independent media. Protesters at times pelted police with snowballs and plastic bottles.

“Putin is a thief,” some chanted in Moscow. “This is my home, I’m not afraid!” Passing cars honked in support.

Police loudspeakers bellowed: “Respected citizens, the current event is illegal. We are doing everything to ensure your safety.”

Protesters cried: “Police are the shame of Russia.”

After nightfall, police charged at groups of young protesters trying to get close to the Matrosskaya Tishina detention center, where Navalny is held. Some protesters were wrestled to the ground before being dragged to police buses. Dozens were arrested near the detention center.

According to OVD-Info, 3,324 people were taken into custody around Russia, including about 1,320 in Moscow. Russian officials did not immediately give figures on detentions.

Navalny’s wife, Yulia, wearing a black woolen hat and black jacket, posted a selfie at the protest, saying: “What happiness that you’re all here. Thank you!” Minutes later, she sent a selfie from the inside of a police van, saying she had been detained. Local media showed video of police leading her to the van. She was released from police custody after several hours, the Russia news outlet RIA Novosti reported.

The protests marked one of the most forceful displays of opposition to Putin since anti-government rallies in Moscow in summer 2019 over the banning of candidates for local elections.

The video, posted Tuesday, alleging colossal corruption in the construction of a vast Black Sea palace for Putin, has been viewed more than 70 million times. The Kremlin denies any relationship between Putin and the palace.

Navalny has led opposition to Putin for more than a decade. But Putin has recently moved to crush dissent, with some measures that appear aimed squarely at Navalny.

New Russian laws allow authorities to brand individual activists as “foreign agents,” while others have made it more difficult to express dissent, organize and protest. It follows constitutional changes last summer that gave Putin the opportunity to stay in power until 2036.

The showdowns in Russia could pose an early foreign policy challenge for the Biden administration as it looks to define its relations with Putin. A State Department statement said the United States “strongly condemns the use of harsh tactics” and called for Navalny’s “the immediate and unconditional release.”

In Moscow, key Navalny ally Lyubov Sobol, an investigator at his Anti-Corruption Foundation, was arrested at the square soon after the protest started. She was later charged with repeatedly participating in illegal protests.

Alexei Navalny was once a mere annoyance to the Kremlin. His poisoning shows how much that has changed.

Sobol live-streamed a message directly from the police truck after her arrest, urging Russians: “Don’t be silent! Don’t be afraid.

“I believe that I am right,” she said as other arrested protesters cheered in the police truck. “You cannot close your eyes to what is going on in Russia right now.”

Nikolai Agilko, 23, one of the protesters in Moscow, said he was inspired by Navalny’s return to Russia on Jan. 17. “He’s like a hero, I think. It’s very inspiring. He’s brave, so we should all be brave today.”

“I have a lot of friends who are scared in this situation, so they’re not here,” he said. “But I wanted to be brave and come here today.”

Ruslan Ivanov, 79, stood out in the Moscow crowd amid many young demonstrators. “I wanted to come out to support all of the young people here, to show that their demands are correct,” he said, referring to the calls for to release Navalny.

Elena, 60, who declined to give her name because the protest was not authorized by authorities, said she came out in support of Navalny, but also because she was unhappy at “how people in this country live.”

“I have five grandchildren, and I want them to live in a different country — a free country,” she said.

Navalny accuses Putin of ordering the nerve agent attack that left him in a coma and under medical care for months in Berlin. The Kremlin denies any links to the poisoning, but it has refused to open a criminal investigation.

In Khabarovsk — about 3,800 miles east of Moscow — riot police wrestled protesters to the ground and dragged them to waiting police trucks, according to videos posted online from the city.

Even in jail, Russia’s Navalny knows how to enrage his rival Putin. This time it’s with a viral video.

Popular Russian video blogger Yury Dud, whose YouTube channel has more than 8.6 million subscribers, participated in the Vladivostok protest in support of Navalny. Another popular blogger, Ilya Varlamov, was detained in Moscow. Journalists from independent media outlets Mediazona and Meduza were arrested in St. Petersburg.

Many coordinators of Navalny’s regional headquarters were detained in different Russian cities, according to the director of Navalny’s Anti-Corruption Foundation, Ivan Zhdanov.

Zhdanov made the comments on a live YouTube broadcast on Saturday with more than 200,000 viewers.

A court ordered Navalny jailed on Monday over allegations that he violated the terms of a suspended sentence in a fraud case, a case that the European Court of Human Rights has declared was political. Facing two other criminal cases in a justice system notorious for politicizing cases, he could face years in jail.

Navalny says the cases against him are political.

Russian authorities said Friday that the embassy posted information on the website on the planned location of the protests. Russian Foreign Ministry spokeswoman Maria Zakharova said U.S. Embassy officials would be summoned to address the Russian complaints. #