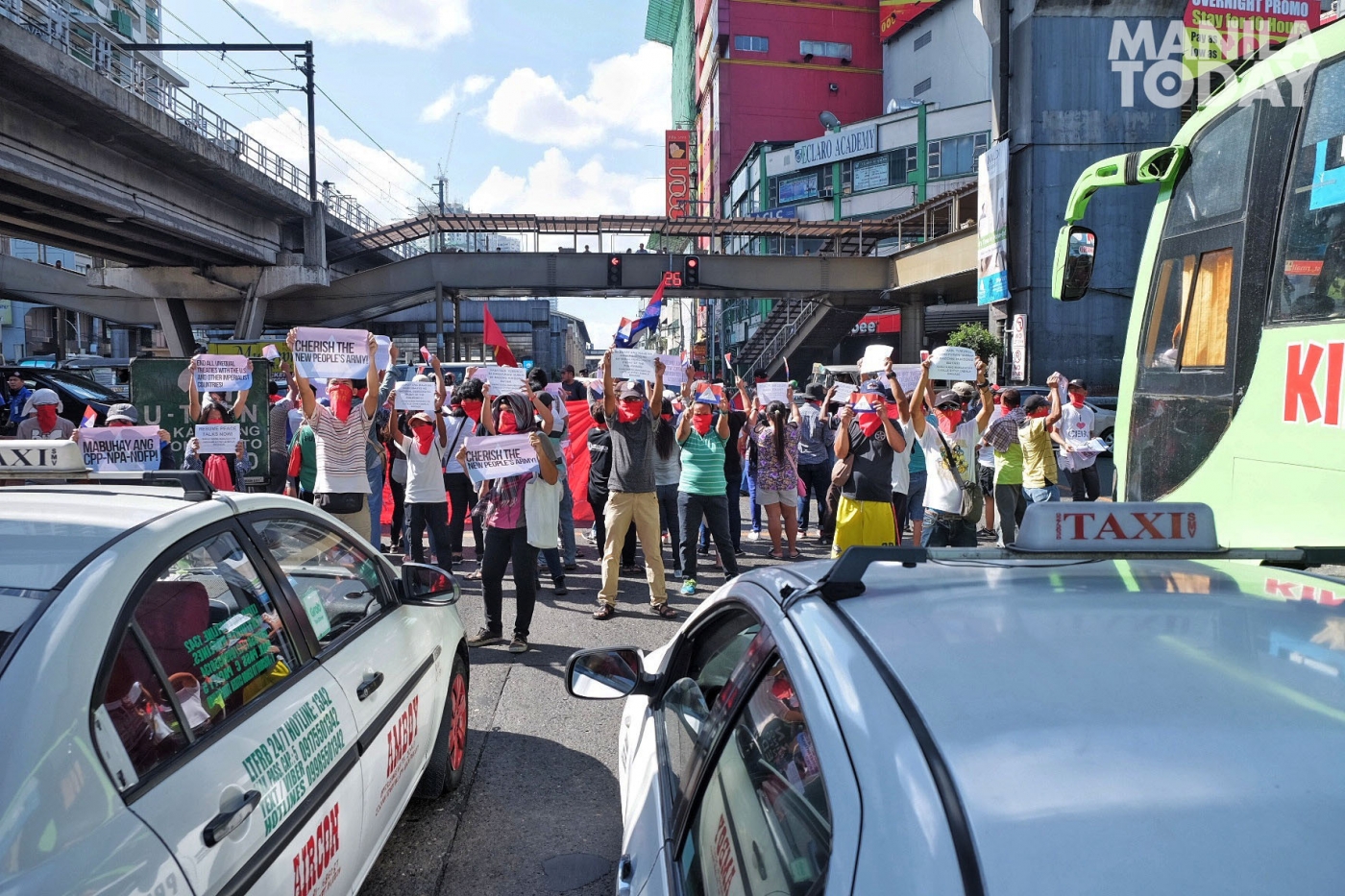 Hundreds of members of various National Democratic Front of the Philippines (NDFP) allied groups in Metro Manila held a lightning rally in the EDSA and Aurora Boulevard intersection in the busy Cubao, Quezon City area 9am today. The rally celebrated the 45th year anniversary of the NDFP and called for support for the people’s democratic revolution and for the nearly 50-year old armed struggle that aims to fundamentally change what they analyzed as the moribund semi-feudal, semi-colonial social system in the country.

The groups vowed to pursue the people’s war to victory amid President Duterte’s continued anti-people policies such as Martial Law in Mindanao, intensification of militarization in the countryside, Oplan Tokhang and his worsening record of human rights violations, while turning back on his promises to pursue peace through social and economic reforms, end endo, implement land reform, uphold territorial and economic sovereignty and uphold the indigenous peoples’ right to self-determination and correct historical injustice against them, etc.

NDFP members also honored their revolutionary martyrs “who unselfishly offered their lives for the greater interest of the Filipino People.”

02
Liliosa Sumilang of NDFP Metro Manila read a statement on the NDFP anniversary.

What is the NDFP?

The NDFP was established in 1973 on the foundation of the basic alliance of workers and peasant, following also the reestablishment of the Communist Party of the Philippines (CPP) and its armed wing the New People’s Army. The NDFP is further composed of various organizations among the petty-bourgeoisie–youth and students, women, medical professionals, teachers, members of church and religious sectors, etc.  The NDFP has 18 affiliate revolutionary organizations.

The CPP cited NDFP’s role as “important in building the broadest unity of the Filipino people as they wage revolutionary armed struggle and civil war against the ruling reactionary regime in the Philippine revolution.” It also recounted that “For four decades and a half, allied organizations of the NDFP have extended political and material support to the NPA. From the ranks of the NDFP allies have emerged Red fighters and commanders of the NPA.”

The NDFP represented the CPP and the NPA and its people’s democratic government (PDG) in the 30-year old peace talks with the Government of the Philippines, and even completing its own version of the Comprehensive Agreement on Social and Economic Reforms (CASER) despite the hiatus in the talks with the current administration. The PDG is comprised of organs of political power (OPP) built from the village level up on the foundations of peasant revolutionary mass organizations and serves as the revolutionary forces’ expression of their own government. The OPPs mobilize the people to carry out land reform and anti-feudal struggles, raise people’s livelihood, provide educational, health, economic and other public services. Peace and order is maintained through the mobilization of militias and self-defense units, while drug and other criminal syndicates are prevented from operating in these areas. Local conflicts are settled through arbitration, while it administers justice through a people’s court. The PDG also exercises state prerogatives such as taxation, more commonly known as the revolutionary tax, which Duterte has spoken vehemently against in recent times, with the Department of Justice even filing a proscription petition with a list of more than 600 suspected supporters of the CPP-NPA supporters. The NDFP also implements environmental and other policies in line with the people’s nationalist and democratic aspirations, such as its operations to punish destructive mining activities of giant foreign mining corporations in the country.

While the substantive agreements with the Philippine government has yet to be realized, the NDFP has adopted its own program of government that it sees as “a more comprehensive one and based on the scientific analysis of the root causes of the social problems in our country.” The NDFP 12-Point Program is as follows: