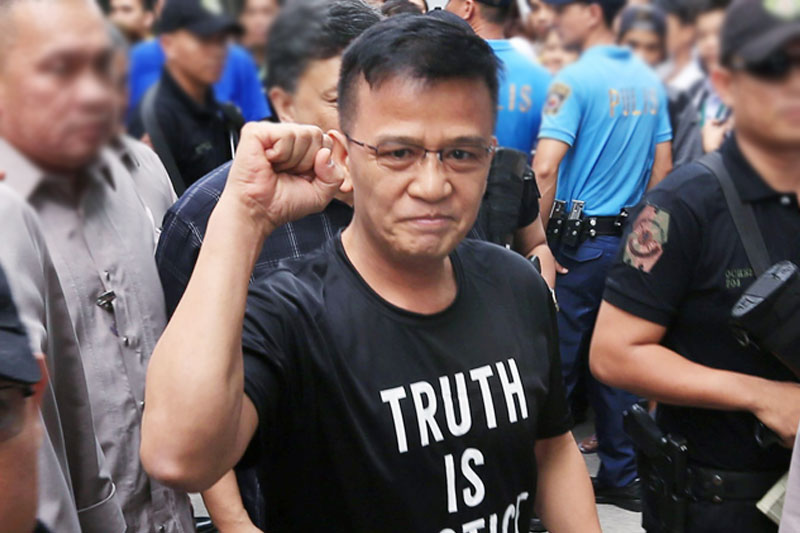 MANILA, Philippines — Jail officials and inmates gave a warm welcome yesterday to former Bureau of Customs commissioner Nicanor Faeldon after he was transferred to the Pasay City Jail from the Senate that had ordered his detention for contempt.

Faeldon, wearing a black shirt with the words “Truth is justice” printed on it, was admitted to the city jail past noon and was greeted with cheers from inmates and their visitors waiting outside.

Bureau of Jail Management and Penology (BJMP) spokesman Senior Insp. Xavier Solda said Faeldon was detained on the second floor of the jail’s male dormitory but he would stay in a separate cell allotted for him in the meantime.

Solda told reporters the space is cramped and Faeldon will sleep on a hard bed.

He gave assurance that Faeldon will not have special privileges but he will be safe inside the jail that has 997 inmates. “For now, what is important, he arrived safely and we appreciate his cooperativeness,” Solda added. Faeldon’s lawyer Jose Diño thanked the Senate’s sergeant-at-arms for the very professional handling and custody of his client.

He believed that Faeldon “is with his own kind” now that he has been detained at the city jail, unlike in the Senate where he would be left alone after visiting hours.

He also appealed to the Supreme Court (SC) to act on Faeldon’s motion for provisional release, which they filed yesterday morning.

“We are very hopeful that the SC would heed the urgent appeal, specially with this exigency, and they would act affirmatively on the motion,” he said.

Diño said Faeldon’s detention at the Senate would not affect his new duties as deputy administrator of the Office of Civil Defense under the Department of National Defense, and he was being briefed by OCD staff about the particulars of his new job.

Previously, senators unanimously agreed to transfer Faeldon to the Pasay City Jail after he was detained at the Senate for allegedly displaying rude behavior during a committee hearing on the alleged shipment of P6.4 billion worth of shabu into the country and alleged corruption in the BOC.

The SC did not act yesterday on Faeldon’s petition seeking his immediate release from detention as ordered by the Senate after refusing to cooperate in the legislative inquiry on the P6.4-billion shabu shipment in May last year.

An insider bared that the petition filed by Faeldon last Monday was not included in the agenda of the SC justices during their regular weekly session yesterday.

“It was not immediately raffled last Monday so it was not included in the agenda,” explained the source, who spoke on anonymity due to lack of authority to speak for the Court.

In his petition, Faeldon asked the high court to issue a temporary restraining order (TRO) stopping the implementation of the arrest order issued by the Senate against him that led to his detention in the Senate since September last year.

In asking for TRO, Faeldon said he has been deprived of his liberty for at least 134 days already since he was cited by the Senate for legislative contempt “which in any jurisdiction is neither a heinous offense nor a non-bailable offense.”

Faeldon argued that he has been unable to perform his duties in his new post at the OCD due to his detention. He also cited the repercussions of his detention on his family.

Petitioner likewise assailed the legality of the Senate order, saying it violated his constitutional right to due process. – With Edu Punay, Christina Mendez, Cecille Suerte Felipe