No task too big nor too small for Fidel Agcaoili 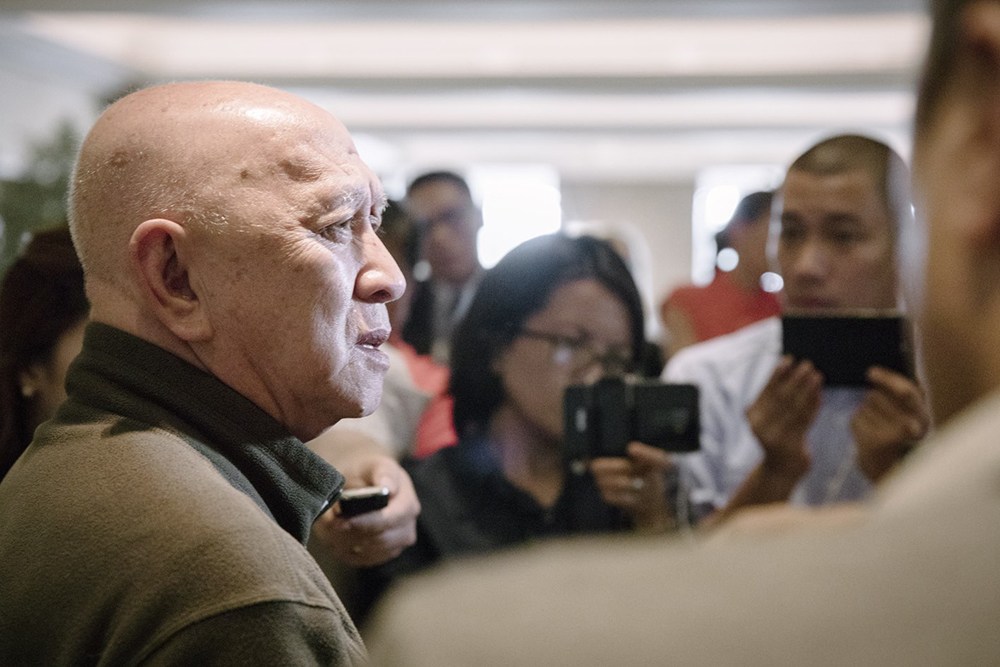 Who is Fidel Agcaoili? And why is everyone thanking him for his early birthday greetings?

MANILA – As chief negotiator of the peace panel of a revolutionary movement, one might expect an overbearing figure. But the deluge of condolences and tributes and the exchanges of anecdotes online as they shed tears speaks of a man who deserted comfort in lieu of serving those who have least in life.

Fidel Agcaoili, chief negotiator of the peace panel of the National Democratic Front of the Philippines, has been a constant figure in the Philippine movement for human rights and the pursuit of a just and lasting peace. Yet, over the years, he was able to maintain a self-effacing leadership.

On July 23, Fidel passed away due to pulmonary arterial rupture, which caused massive internal bleeding. His passing brought shock to those who loved and knew him, to his colleagues who cannot find the heart to look at the now empty chair where he would usually sit to have coffee, or those who will now forever have to wait in vain for their early birthday greetings, which he would send through Facebook at least three days in advance.

Yesterday, August 8, would have been his 76th birthday. Condolences and tributes poured anew.

Fidel came from a rather comfortable life. His father was an established lawyer in the Philippines. But this did not stop him from looking into the situation of those who have less in life.

As a political science student at the University of the Philippines, he joined the Student Cultural Association of UP (SCAUP). He was later introduced to Jose Maria Sison and Julie de Lima as he joined the Marxist study group that the former had formed. De Lima, in a video message, said they had access to the collection of Marxist books in the residence of an ambassador’s private library, which, at that time, posed danger to them as any possession of what the military considered as subversive was used as evidence for crimes against national security such as subversion and sedition.

Both Sison and De Lima would also later become his lifelong friends and comrades as they became part of the negotiating panel of the NDFP.

In her tribute, De Lima said that Fidel’s father feared that he was “straying deeper into revolutionary activism” and exiled him to the United States. He worked on the side while studying at a university in California. Here, he joined the wide student movement against the US war on Vietnam.

A year later, he returned to the Philippines and continued his activism. He then eloped and married Rosario, known to many as Chit.

In his mid-twenties, Fidel was elected to be part of the Central Committee of the Communist Party of the Philippines in 1970, where he carried out crucial tasks for the then two-year old party.

Due to intensifying political climate under the Marcos administration, the Agcaoili family was relieved to know that the couple went underground before Ferdinand Marcos declared martial law rule in 1972. His family was then subjected to interrogation as state forces wanted to know their whereabouts.

Fidel, Chit, and their two children were arrested two years later. His sister Annabel said Fidel was mistreated while in prison, where he spent the next 11 years of his life as one of the “hard cores” among political prisoners and the longest held political detainee under the Marcos dictatorship.

While behind bars, Fidel did not stop in pushing for change. They struggled for better living conditions, longer visiting hours, to name a few. In 1976, at the height of martial law, Hermie Garcia, also a political prisoner that time, said this eventually led to the 14-day hunger strike that demanded the release of two nursing mothers and their babies.

More than 140 detainees participated in the hunger strike. And they were subjected to a brutal retaliation afterwards by the military. Their cells were raided and leaders of the hunger strike were forcibly taken in the middle of the night.

“Fidel was one of the targets. In his (detention) building, the detainees had put up a barricade of huge benches and tables to protect Fidel and other leaders. When the soldiers got hold of Fidel, the detainees would not let go of him. There was literally a tug of war between soldiers and the detainees with Fidel in the middle,” said Garcia.

He eventually decided to go with the soldiers to prevent injuries to the detainees.

Apart from better conditions, they also pushed and campaigned for their release, even if among the cruel retaliation includes being locked up incommunicado.

Satur Ocampo, who was among those detained with Fidel, attributed his escape from prison in 1985 from the late negotiator’s skill in earning the trust of their captors. After hearings, they would first convince their jail guards to have lunch first at a nearby eatery and then watch movies. Before they knew it, they would stop by Fidel’s house after hearings, where their jail guards can eat with them.

In 1981, Marcos lifted the martial law on paper and released several political prisoners to deoderize his leadership in the face of international scrutiny. However, Fidel, one of those considered by the military as hard cores, remained in jail.

With the torment he experienced in jail, it was not surprising to see Fidel continue his human rights advocacy after his release from detention. He helped found the Samahan ng Ex-detainees Laban sa Detensyon at Aresto (SELDA) and later helped in the consolidation and documentation of the nearly 10,000-class suit against the Marcoses before the US Federal court in Hawaii, which they won.

Fidel’s crusade for better conditions of political prisoners and their release continued even as a member of the negotiating panel and later its head. His face would turn red, or “alimango” as he was teased by colleagues, and his hoarse, raspy voice would erupt in frustration during meetings and negotiations with Philippine government emissaries whenever the issue touched on the impending release of political prisoners.

As co-chair of the reciprocal working committee that drafted the Comprehensive Agreement on Respect for Human Rights and International Humanitarian Law, the first substantive agreement signed between the Philippine government and the NDFP, Fidel pushed for the release of political prisoners.

In Part 3, Section 6 of the CARHRIHL, the Philippine government committed to abide to the Hernandez doctrine and to review cases of all political prisoners who have been charged, detained or convicted contrary to this doctrine and immediately release them.

“His tireless and selfless commitment in serving the people will be remembered, celebrated, and honored for his tremendous contributions in advancing and pursuing the cause of just and lasting peace that will forever live in the hearts and minds of the people whom he have inspired and influenced, and most especially those who have followed his example in serving the people and the revolutionary cause,” said Selda in a statement, paying tribute to their founding secretary general.

Agcaoili also served as secretary general of the Partido ng Bayan, a national democratic political party that fielded candidates to both senatorial and congressional seats during the administration of then president Corazon Aquino.

An advocate of peace

In 2016, Fidel assumed the chairmanship of the peace panel.

Detained NDFP peace consultants, in a statement, described the late chief negotiator as a leader who “possessed and wielded the traits and skills needed by a peace negotiator in the service of the people and the revolution.”

Under the Duterte administration, Fidel was known for his meetings with then president-elect Rodrigo Duterte, which eventually paved way to the resumption of formal peace talks in August 2016. Unprecedented progress marked the first year of the peace negotiations, especially where social and economic reforms are concerned, until it was terminated by President Duterte.

Far from the stereotype public image of the peace talks, where negotiators are stiffly opposite each other or are posting with measured smiles for posterity photos, “the real life action is more dynamic and full of drama, spanning the whole spectrum of situations and emotions,” said detained peace consultants.

But when the situation calls for it, Fidel can play the role of proverbial “bad cop,” detained peace consultants said, “crossing words with the most hardline or obstinate GRP protagonist. He could break the ice by initiating and engaging in friendly banter. Or he could be his congenial, amicable and persuassive self in order to clinch an agreement,” the detained peace consultants said.

During the online program, former GRP peace panel Nani Braganza, also Fidel’s godson, gave a heartfelt tribute to “Nong Tsip,” as he recalled their cigarette and coffee breaks together, which he said is part of the “problem solving” and to make their working atmosphere more conducive.

No task too big or two small

Fidel might be remembered for the big, crucial, and sensitive tasks he has done for the human rights cause and the revolutionary movement but for colleagues and comrades who have worked closely with him, he will always be remembered for his small yet thoughtful acts of kindness.

Fidel and fellow peace panel member Coni Ledesma would usually look into the arranging of accommodations, travel and transportation, food, reference materials, and other technical needs of Philippine-based consultants who would visit their office in Utrecht, The Netherlands.

He would dutifully and cheerfully wake up early at dawn, said detained peace condulstants, and drive more than half an hour from Utrecht to Amsterdam to fetch colleagues at the Schiphol International Airport.

“No task was too big for Ka Fidel. Nor was there any that was too small. He carried out his tasks, big or small, with the same dedication, efficiency, eye for detail, energy and enthusiasm,” detained peace consultants said in a statement.

But his passing has revealed a big mystery among his Facebook friends. Nearly everyone he knows, each year without amiss, received their birthday greetings at least two to three days in advance. But more than birthday greetings, he is also among the first to extend congratulations to happy news, words of wisdom to those in need, and condolences and warm words for those suffering. And yes, lots of teasing.

At times, he would send Facebook messages asking for a recipe, commenting on photos of children of activists, and sharing photos of his own grandchildren. University of the Philippines professor Sarah Raymundo said Fidel was particularly interested in millennial speaks, asking her what acronyms like CTTO means.

As a news junkie, he is often seen with his tablet as he read and share Philippine and international news. He is also quick to share stories from the alternative media.

Fidel’s wife Chit, their five sons and their granchildren are still wrapping their heads over his sudden passing.

His son Nikki said that growing up, he felt abandoned by his father who was away from them. But hearing the stories of people whose lives their father touched, their questions were finally answered. He understood that Fidel’s children were not just the five of them. It was all of those he served selflessly.

“During those times that papa was not with us, he was making it up by touching other people’s lives, those in need,” he said.

In one business meeting in February, Nikki shared that a senator approached him, saying that Fidel was lucky that none of his sons followed his footsteps. In hindsight, he said, he should have spoken out and said Fidel was instead unfortunate.

Nikki said their family will continue to support the causes and struggles of his father and do what they can to see his dreams into reality.

The post No task too big nor too small for Fidel Agcaoili appeared first on Bulatlat.