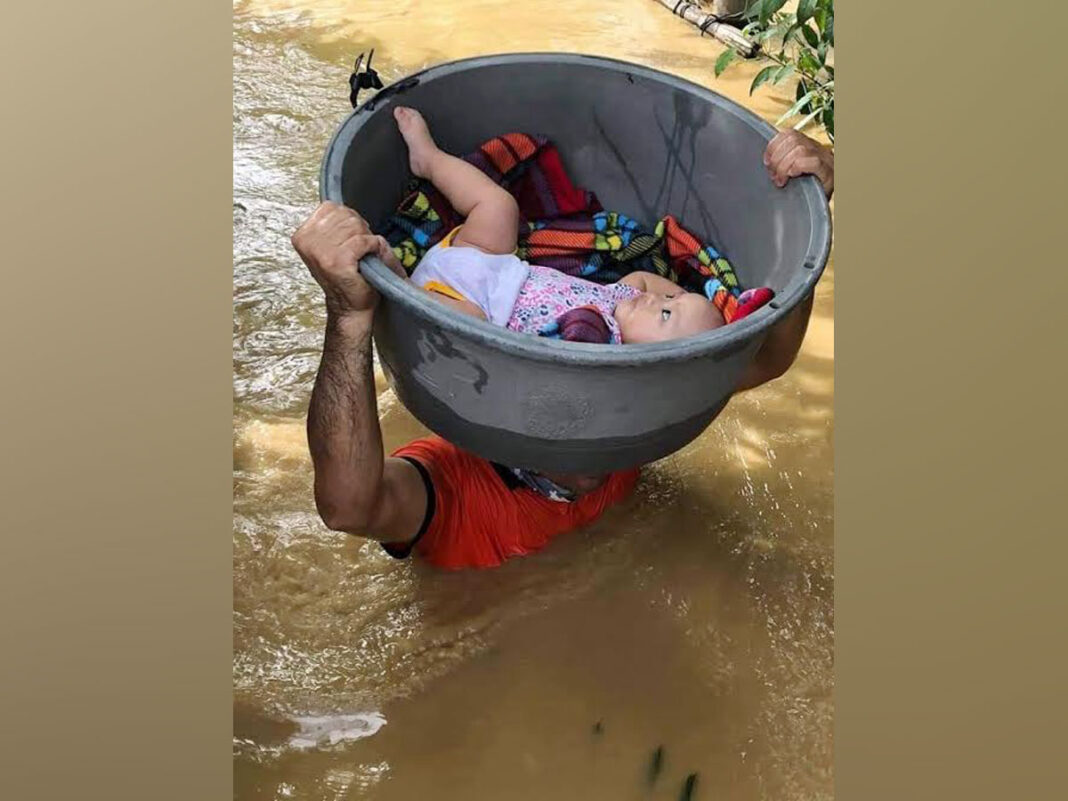 From a perfumery setting aside a day’s sale for basic commodities, to a Filipino-operated cargo forwarder giving free shipment, and even a basketball game for a cause, Filipinos and other nationals here have initiated various efforts to send relief, in their own little way, to victims of Super Typhoon Rolly (Goni) and Typhoon Ulysses (Vamco), which recently hit the Philippines.

Shibi M. Thampi, managing director of a perfumery which has 10 outlets across the United Arab Emirates, 7 of which are in Dubai, said he came up with the idea because “Filipinos are very dear to me.”

“It pains me to see many of them greatly affected by recent typhoons. That’s why we have decided that on Friday, November 20, all income of our flagship shop in Al Rigga (in Deira, north Dubai) will be used to buy all essential needs of kabayans (compatriots) back home.”

Thampi, who is from India, expressed hope “that this initiative of ours can inspire other companies and individuals to do their fair share of giving back to the community.”

The company will be coordinating with the Philippine chapter of Lion’s Club International, of which Thampi is a member, regarding delivery of the relief goods.

Like most Indian businesspeople here, Thampi has been to the Philippines several times and thus has established a network of contacts.

Meanwhile, sisters Malou Q. Prado, who operates a travel agency, and Michelle Q. Quinto, who runs a cargo and balikbayan box forwarding company, have tied up to offer free shipping to overseas Filipino workers (OFWs) wanting to send groceries and other essentials to typhoon victims back home.

“Marami na pong inquiries,” said Prado. “During this pandemic, lalong need ng mga kababayan na nandito na tumulong sa mga nasalanta ng bagyo sa Pilipinas.” (We are getting lots of inquiries. During this pandemic, our compatriots here should all the more help those ravaged by typhoons in the Philippines.)

Free shipping is from November 15 to 27, according to the companies’ joint announcement on Facebook, which has reached over 500 netizens and shared 32 times as of this writing. Shipments are expected to arrive in a month’s time, according to Prado.

Basketball afficionados have also been giving their share, playing in a friendly games tourney through the “OldSchool Basketboleros” founded by Dubai resident, Arnel Fernandez, 47, himself a Bicolano, for the affected families through the group’s “Tulong Mo, Laro Mo” (Your Help, Your Game) program.

Renato Galope, a Dubai resident, has also coordinated relief efforts with interested OFWs and has so far collected balikbayan boxfuls, the first of which will be sent to Bicol; the next, to Isabela.

“Mostly ako lang (nangongolekta), minsan naman may tropa kung saan malapit (‘yung pagkukunan). Ako lang din nag-iimpake mag-isa,” Galope said. (I mostly do all the collecting. At times, friends nearby get them for me. I also do the packing by myself.)

He said the boxes will be sent to designated persons in the Philippines who also are acquaintances of Dubai OFWs.

(Whatever we were able to raise. We are hoping to give P10,000 each for Marikina and Albay typhoon victims…. There was also a donation of AED300 dirhams cash, which I will use to buy groceries.)

Other Dubai residents like community leaders Emille Parcia and Josie Conlu, have pooled their resources to likewise send help to the Philippines.

“My heart is aching to see what is happening sa Pilipinas (in the Philippines). If only I could do more sana talaga (hopefully),” Conlu said.

Parcia, for her part, said she feels for the victims, especially the marginalized ones.

“Napakahirap maging mahirap. What more ‘yung sitwasyon na kung saan ay na-wash out ang lahat ng gamit, buong bahay putik. Sabi nga ng anak ko, ‘Ma… umuungol sila sa paghingi ng tulong,’” she said. (It’s already tough being poor. What more if you are in a situation where all your belongings have been washed out and your home muddied? My daughter told me, “Ma, they are crying for help.”)

Parcia, who had also been active sending food to displaced OFWs in Dubai during the pandemic’s lockdown days, said the relief goods were being sent to her children in Cavite who pack them for delivery.

As of press time, 269 packs of toiletries and 300 packs of clothes have been readied for distribution to various points in Cagayan Valley, Marikina, and other parts of Rizal, she said.

At the crack of dawn on Wednesday, November 18, her son, Glenn Rigor, supervised the transport of a truck-load of relief from their place in Mendez, Cavite to Balubad and Provident Village in Marikina, Parcia said.

The relief goods were mostly flown from Dubai, she said.

Another OFW, Mary Margarete Serrano, Abu Dhabi school nurse, has joined in the relief efforts, selling cosmetics online to send money home for her relatives in Pampanga to prepare hot meals for the evacuation centers there.

“‘Yung mga kaibigan ko sa Pampanga, sila nagluluto tapos ‘yung ibang kaibigan ko sila nagdi-distribute,” said Serrano, who is from Santa Rita, Minalin in Pampanga. (My friends in Pampanga will cook and prepare the meals while my other friends will distribute them.)

(A lot of our fellow Filipinos have not been able to get help, especially those in remote areas. I have been selling my unused make-ups and skin care kits to raise money to buy food packs and relief goods. It’s the middle of the month. I have yet to get my salary and I have sent my money to my family which was why I decided to sell.)

Still another OFW, a triathlete known for holding sport events for a cause and his support for the tribal communities of Palawan, has set out on a relief effort of his own, selling his bike and other items for the undertaking.

“At the moment, we have AED10,000 (P131,280) which will go to victims of Typhoon Ulysses. The rest of the items that I could sell will also be put together and sent to partners in the Philippines. I might even dispatch friends back home to themselves go to areas ravaged by the typhoon,” Romeo III Puncia, emergency medical technician (EMT) with the Abu Dhabi Police’s emergency and public safety department, said in a mix of vernacular and English.

A triathlete with bragging rights a haul of medals from international competitions, Puncia has been recipient of different awards from the Filipino community in the UAE for his cause.

Filipinos in the UAE have been known for their quick relief efforts whenever calamities strike home, notwithstanding hardships they face like the current pandemic. – Rappler.com